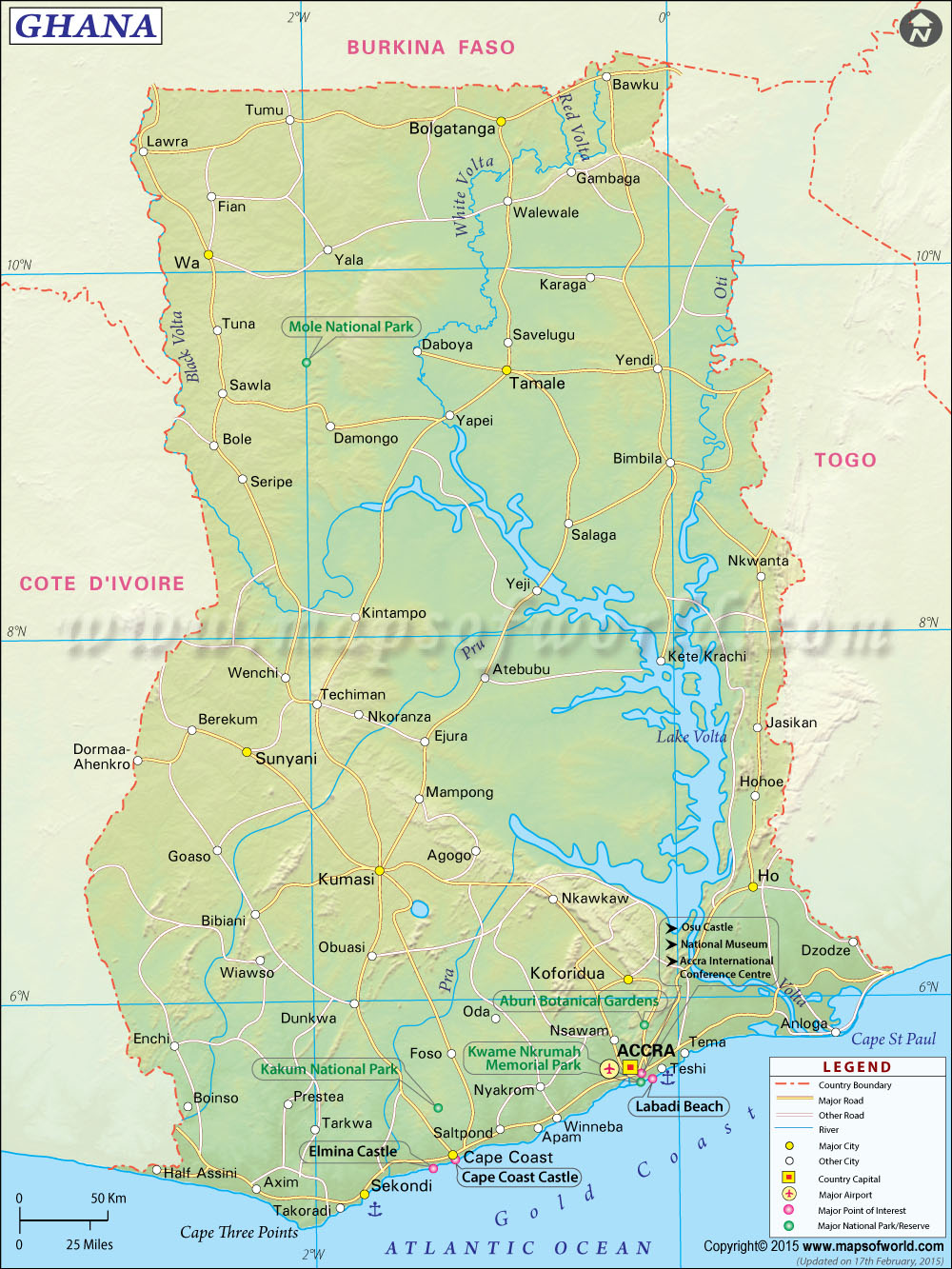 Archaeological evidence show that human activity existed in the region of Ghana in 1500 BC. But the first confirmed inhabitants of the region are those of the Dagombas, who established settlements in as early as 1210AD.

The first Europeans to arrive were the Portuguese, who were drawn to the region due to the large deposits of gold. In 1482, they had built a castle at Elmina, with the purpose of enhancing their trading activities, especially in the gold and slavery industries. By 1492, the region was known in the Western world as the Gold Coast.

In 1598, Dutch traders had entered the region and built several forts along the coastline. The most notable of these forts was the Komenda Fort. In 1637, the Dutch captured and took over the Elmina Castle.

In the following years, a number of other nations came to the region such as the British, the Danes, and the Swedes. Forts were built by these traders and in 1872, the Dutch had lost interest in the region and ceded their control to the British, ending their dominance of 274 years in the Gold Coast.

In 1874, the British made the region a crown colony, authorizing their complete control over the Gold Coast.

After the Second World War, a group of ex-military native servicemen were inspired by the acts of rebellion and uprising against the British rule in India and Burma, where they had fought during the War. In 1947, the group formed the country’s first political party, which was the United Gold Coast Convention. In 1949, one of the group’s leaders named Nkrumah, separated and created his own party, which was the Convention People’s Party. In 1952, Nkrumah became the Gold Coast’s Prime Minister.

The country’s name from Gold Coast to Ghana happened in 1956.

The next few years were filled with alternating military and civilian governments and in 1992, a new constitution was implemented, coinciding with the country’s first general elections.

Ghana is located in West Africa, on the Gulf of Guinea and the Atlantic Ocean. Its borders are the Ivory Coast located to its west, Burkina Faso to the north, Togo to the east, and the Gulf and Atlantic to the south.

Ghana has a tropical climate due to its close proximity to the equator. Its vast landscape includes mountains, forests, woodlands, savannas, and many wildlife parks.

Ghana is a unitary presidential constitutional republic. The Supreme Commander-in-Chief is the President, who is the Head of State and Head of Government, and that of a multi-party system.

People in Ghana are friendly and have a laid back attitude. A country filled with natural resources and wonders, its rich colonial history also make it an exciting country for historic monuments and colonial architecture.

The most visited city is Accra, which is Ghana’s capital. It has the prefect blend of a modern city with modern buildings but boasts of historic sites and cultural treats as well. The most notable sites to visit are the James Fort and the Christianborg Castle. The Makola market and the city’s nearby beaches are also well worth visiting.

The Cape Coast Castle is one of the country’s most impressive forts, built by the Dutch in 1637. The Castle was overtaken by the British in 1664, and built into a museum in the 20th century.

Kakum National Park is one of the country’s most visited destinations. The park consists of a dense tropical rainforest where 40 species mammals live, as well as 250 species of birds. The highlight of the park is the Canopy Walkway, built at 30 meters above ground, 1000 feet long, and offers stunning views of the tropical jungle.

Lake Volta is the largest artificial lake in the world. A one-way trip from north to south lasts for 24 hours, with passenger boats that are built for the adventurous spirit.

The city of Kamusi is another great city to visit in Ghana. It is the home of the Ashanti people, who are noted artisans, where their gold jewelry, trinkets, and Kente cloth are famous worldwide.

About 95% of children in high school age attend school, giving Ghana one of the highest school enrollment in Africa.