The flag of Argentina has three horizontal stripes, with light blue on the top and bottom, and white in the middle. Centered on the middle white band is a golden sun, called the Sun of May. 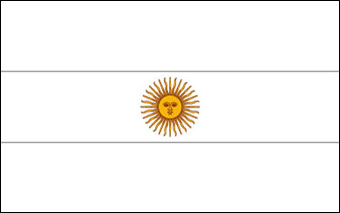 Download Picture of Blank Argentina Flag For Kids to Color

The flag of Argentina is made up of three horizontal bands of light blue on the top and bottom and white in between. In the center of the white band is a golden sun, called the Sun of May, from which sixteen long, wavy rays of sunshine emanate.The colors of Argentina’s flag may reflect the newborn nation’s ties to the House of Bourbon, which was not in power in Spain at the time of Argentina’s war of independence. The fighting nation may have wanted to show loyalty to Spain, rather than France and Napoleon, who had taken control of Spain at the time. Others believe that the flag represents the sky and clouds, because of the addition of the sun. However, the sun is the symbol of the Incan god of Sun, Inti.

History of the Argentinian Flag

The flag of Argentina was designed by military leader Manuel Belgrando in an effort to differentiate between the Argentine armies and the Spanish, who had both used the colors yellow and red.

The flag of Argentina was raised for the first time on February 27, 1812, in Rosario, Argentina, during the country’s war for independence. This flag featured the light blue and white bands, but the sun was not added until 1818. The national flag of Argentina was officially adopted on July 20, 1816.