About city Lima is the capital of the South American country of Peru as well as its largest city. It covers an area of 2,672.3 sq km and had an… 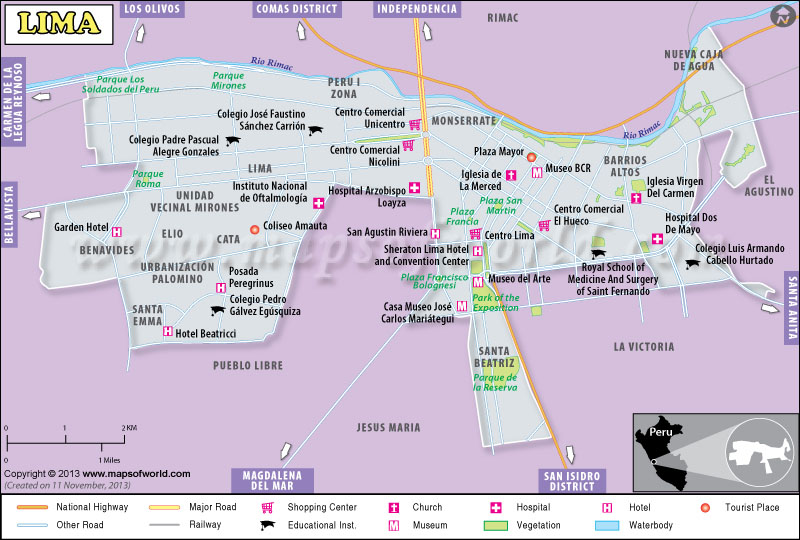 It forms a part of the largest metropolitan area of Peru.

The area occupied by Lima was originally inhabited by several Amerindian groups under the Incas in the 15th century. In 1532, the last Inca emperor Atahualpa was conquered and killed by the Spanish conquistadors, led by Francisco Pizarro. Pizarro was made the Governor by the Spanish King and he established his capital on the site of present day Lima in 1835 and named it Ciudad de los Reyes. This area was known as Limaq in the local language. So, the new capital city soon came to be known as Lima. When Peru became independent, Lima became its capital.

The city of Lima is located on the dry desert plain that lies between the arid Peru coast and the Pacific cliffs to the west and the foothills of the Andes to the east. The urban area has grown up on the flat plains of the Rivers Chillon, Rimac, and Lurin. The city slopes gently upwards to a height of 500 mts. Several isolated hills are scattered throughout the city. The San Cristobal Hill in the Rimac District in Lima is the most extreme outgrowth of the Andes.

The city enjoys a mild subtropical climate. It is located in the desert, but the shores are washed by cold currents which modify the weather. Summers are warm, humid, and sunny. Winters are cooler and often covered by foggy and overcast skies. Rainfall is very low, but heavy mist called Garua is common.

You can travel to Lima in the following ways:

The best time to visit Lima is in the summer, when the weather is dry and bright. Winters should be avoided as the sky tends to be foggy and overcast. Culture (fairs and festivals) and traditions

Several fairs and festivals are celebrated throughout the year in Lima. Some of them are as follows:

Some of the most important landmarks of Lima are as follows :