The flag of Panama is divided into four parts among which the two sections are white in color and the other two are red and blue with five-pointed stars of blue and red in the white sections. 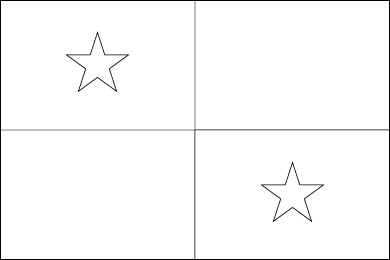 Download Picture of Blank Panama Flag For Kids to Color

The flag of Panama is divided into four quadrants. The upper left (hoist side) quadrant is white with a blue five-pointed star, and the quadrant below it is solid blue.

On the right, the upper quadrant is solid red, and the lower one has a red five-pointed star. The blue and red represent the two major political parties in Panama, the Conservative and Liberal Parties, while the white symbolizes peace. The blue star symbolizes purity, and the red star symbolizes the new law of the country.

History of the Flag of Panama

Officially adopted in 1925, after Panama gained independence from Colombia, the flag of Panama was designed many years before. Maria Ossa de Amador created the first flag of Panama in 1903 from designs created by her son, Manuel Amador Guerrero.

Before the current flag design, the design proposed was similar to the flag of the USA, with thirteen red and yellow stripes, reflecting the nation’s associations with the United States, Spain, and Colombia. In the blue canton in the upper left corner of this design, there were two suns connected in the middle, representing North and South America, to reflect Panama’s location as the link between the continents.