Guinea Africa Map illustrates the surrounding countries, 34 prefectures, and 1 special zone with their capitals and the national capital. 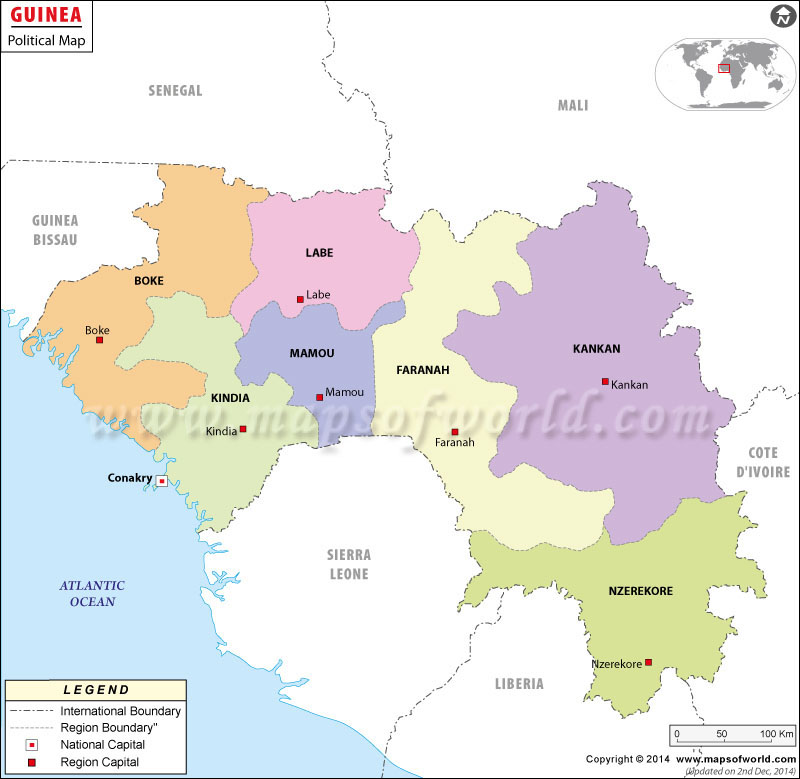 French is the official language of Guinea, a country in West Africa. Guinea has a republic form of government. Guinea attained independence from France on 2nd October in the year 1958. The president of Guinea is the chief of the state and the Prime Minister is the head of the Guinea Government. In the political map of Guinea all the features of the country like the boundaries, and provinces are indicated.

Guinea is a West African country. The country gained independence in the year 1958 from France. The climate of Guinea is generally humid and hot. Iron ore, bauxite, uranium, and gold are some of the natural resources of the country. In the political map of Guinea, the national capital, prefectures and their capitals, and both internal and international boundaries have been clearly marked by using specific symbols. The geographic coordinates of Guinea are 11° North latitude and 10° West longitude.

The national capital of Guinea is Conakry. It is the largest city and also the economic, and administrative hub of the country. There is a port in the capital city, which is also one of the major sources of employment and economy in the country. Guinea National Museum, Conakry Grand Mosque, and Polytechnic Institute of Conakry are located in the national capital. In the printable map of Guinea, the capital city has been highlighted by using a red star. The geographic coordinates of Conakry are 9° 30′ 33″ North latitude and 13° 42′ 44″ West longitude. The airports that are located in close proximity to Conakry are:

The neighboring countries and seas surrounding the country are indicated prominently in the printable map of Guinea. The North Atlantic Ocean is on the western side of the country. The countries that are neighbors to Guinea are:

Some of the major cities of Guinea are indicated on the political map by black dots. The Guinea cities that are printed on the map are: