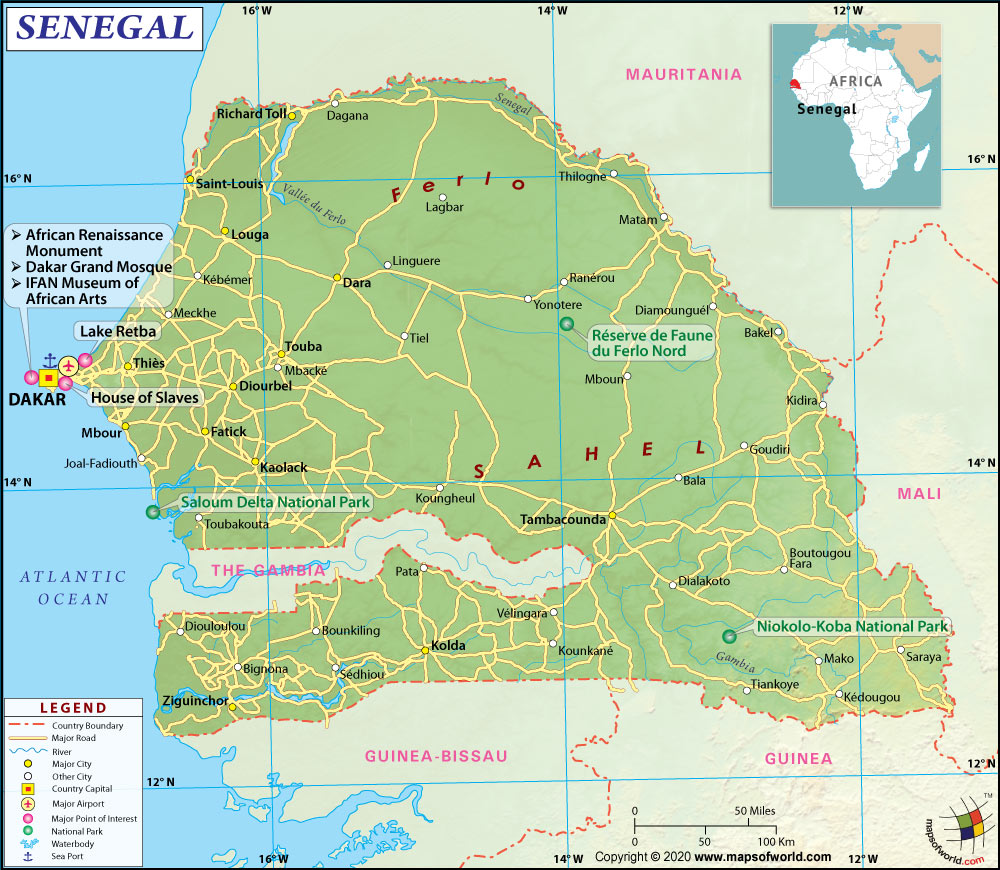 The West African nation of Senegal has been inhabited by a wide variety of ethnic groups over its long history. In its early history, Senegal was inhabited during migrations from the north and east, including the kingdoms of Tekrour around the 9th century, and the Namandirou Kingdom. Eastern Senegal was part of the great Empire of Ghana that dominated parts of West Africa for several centuries from about 830 to 1235. The other great empires of the Saharan region were the Mali Empire and the Songhai Empire.

Berbers migrated to the region, bringing Islam with them beginning in the 8th century. Islam spread over the region in the next few centuries. In the 13th century, the Jolof Empire arose alongside the Mali Empire, taking over the region of Senegambia, south of the Senegal River, and united the individual states of the area into a vassal kingdom.

When European explorers arrived in Senegal, beginning with the Portuguese in the 15th century and followed by the French, Dutch, and British, the region became a highly desired stop on the trade route. France established a base to facilitate its slave trade route, taking slaves from there and transporting them to the New World. The French soon expanded their settlements, colonizing inland by the 1850s.

In 1859, Senegal joined French Sudan to become the Mali Federation, which gained independence the following year. The Federation was short-lived, however, breaking up within a few months and Senegal emerged as independent and French Sudan became the Republic of Mali. Senegal joined the Gambia as Senegambia in 1982, though this arrangement lasted only until 1989.

Neighboring Countries
Senegal shares borders with Mauritania, Mali, Guinea, Guinea-Bissau, and the Gambia, with coastline along the Atlantic Ocean.

Geography
Senegal is located in the Sahara region of West Africa, with coastline along the Atlantic Ocean. The land of Senegal extends westward into the Atlantic Ocean at the Cap-Vert peninsula, where the capital, Dakar, is situated and the westernmost point of the African continent. Senegal’s land features the Sahel, or the transition zone between the Sahara and the savanna. The terrain of the Sahel is mostly sandy, with coastal vegetation, with some tropical rainforests and mangroves along the coast. The Fouta Djallon foothills feature Senegal’s highest point, near Nepen Diakha, which is just 581 meters (1,906 feet) above sea level.

Senegal’s name came from the Senegal River along its eastern and northern borders, and along its southern borders flows the Cassamance River. Another important river in Senegal is the Gambia River. The Gambia is a neighboring country that is entirely enveloped by Senegal, except for its short coastline along the Atlantic Ocean.

Points of Interest
Senegal has many scenic destinations as well as architectural and cultural attractions. The capital, Dakar, features historical architecture and important monuments, like the African Renaissance Monument that commemorates African history and the end of slavery with a statue taller than the Statue of Liberty. Another historic attraction in Dakar is Goree Island (Ile de Goree) which was a trade stop that facilitated the transport of slaves out of Africa. Visitors to Dakar can experience the local Islamic handicrafts, explore the markets, and enjoy the foods of Senegal.

Saint-Louis is the old French capital of Senegal, and its Island of Saint-Louis has been designated a UNESCO World Heritage Site for its colonial architecture. Another attraction at Saint-Louis is its fishing village, Guet N’Dar, where travelers can enjoy the fresh seafood that arrives each day.

The Fathala Reserve at Karang is a natural attraction, where visitors can take a safari in their own cars or with a hired guide, and check out the wildlife within the reserve. Along with a wide variety of birds that are great for birdwatchers, visitors may be able to spot giraffes, rhinos, and antelopes.

Transportation
The major airport hub in Senegal is the Leopold Sedar Senghor International Airport, located in Dakar. This airport offers service to Europe, the United States, and other destinations in Africa. Another important international airport will soon open in Diass, called Blaise Diagne International Airport. Senegal is located along the Trans-African Highway network with routes to Cairo, Ndjamena, and Lagos, and is also connected to the roads of the Gambia. There are many other paved national roads, and local roads, though some remain unpaved. Buses are available for long-distance and local travel in Senegal, but taxis are one of the most popular ways to get around the country. A common type of taxi is called a “sept” which is a shared-taxi or minibus. Senegal’s capital is the end point of the Dakar-Niger Railway which also goes into Mali.