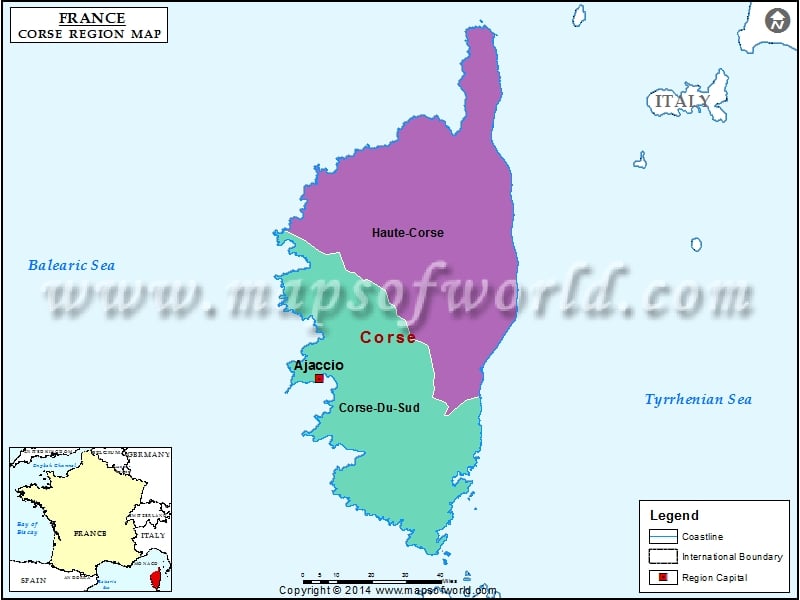 The French Metropiltan Region, Corsica is one of the 26 regions of France. It is also called a “territorial collective” by law. As compared to other regions, this region has more far-reaching powers. Corsica is the fourth largest island located in the Mediterranean Sea.

The islands that are bigger in size than Corsica are Sicily, Sardinia and Cyprus. This island is located on the southeast of France. Corsica is the place where, Napoleon Bonaparte was born. The capital of Corsica region is Ajaccio.

Some towns of Corsica region are Ajaccio, Bastia, Corte and Sartene. Some other towns and villages of the region are Saint-Florent, Calvi, Lille-Rousse, Porto-Vecchio, Bonifacio and Aleria.

The coastline of Corsica is 1,000 km long. The coastline is proud to possess more than 200 beaches. The region is also very mountainous. The highest peak of this French Metropolitan region is Monte Cinto. The height of this peak is 2706 metres.

Corsica has a Mediterranean Climate. The vegetation comprises of forests, woodlands and shrubs. The coastal lowlands of Corsica are part of the Tyrrhenian-Adriatic sclerophyllous and mixed forests ecoregion. Many forests of coastal lowlands have been cleared for agriculture, grazing and logging. This has led to the decrease in the number of mountain forests tremendously. In Corsica, there is a national park called the Parc Naturel Regional de Corse, where many rare animals and plant species are protected. The Golfe de Porto, the Reserve Naturelle de Scandola, which is a UNESCO World Heritage Site.

Tourism contributes tremendously to Corsican economy. The island attracts many tourist every year not only from France but also from other west European countries. Here tourism is concentrated in the area around Porto Vecchio, Bonifacio and Calvi.