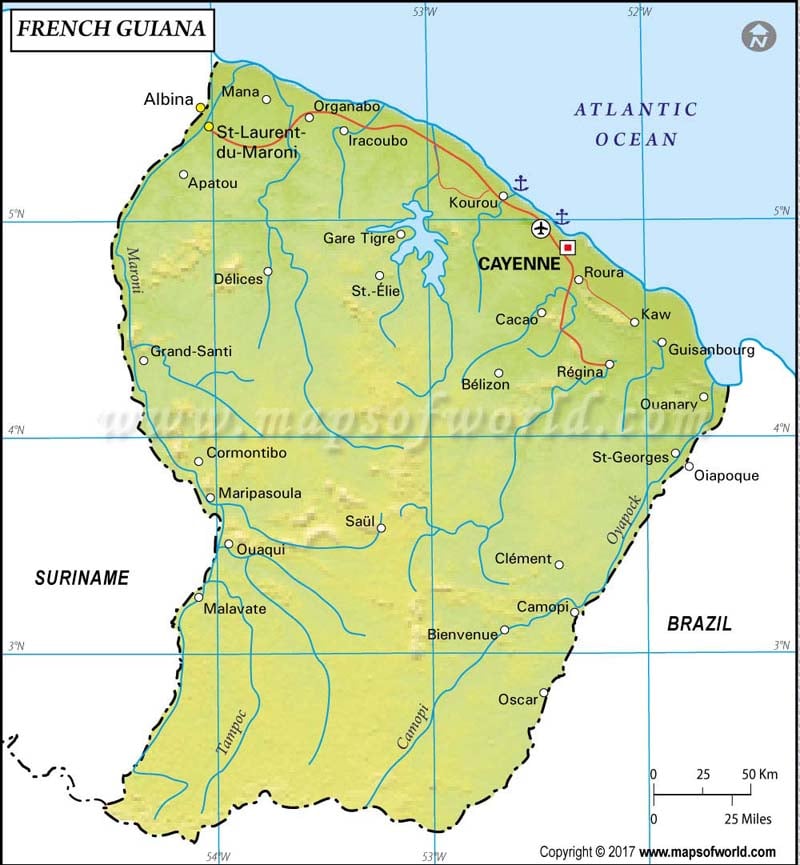 Before the Europeans discovered the region of present-day French Guiana, it was inhabited by Native American tribes such as the Arawak, the Caribs, Galibi, Palikur, Wayana, and a few others.

It was Christopher Columbus who first sighted the coast on his 3rd voyage to the New World in 1498, naming the land “Land of Pariahs.”

In 1624, the French tried to establish a settlement in the region but the Portuguese drove them out as it was allegedly a violation of the Treaty of Tordesillas. In 1630, the French came back and in 1634, established the capital of Cayenne. However, the settlement was again abandoned, this time due to Amerindian attacks.

In 1667, the British briefly seized the area but the Treaty of Breda signed on July 31, 1667 forced them to return the region to France. Thousands of Frenchmen were sent to the region, where they started to build plantations, bringing with them African slaves. The abolition of slavery in 1848 led to the collapse of the plantations when slaves left the region. In the following years, French Guiana and the small islands near its coast became famous for its penal colony, where tens of thousands of French prisoners during and after the French Revolution were sent.

In 1946, French Guiana ceased being a colony and officially became an overseas department of France. The penal colony was also abolished and surviving prisoners returned to France.

French Guiana is located in Northern South America and belongs to the area of the Caribbean South America. To its north is the northern Atlantic Ocean, and to its east and southeast is Brazil, and Suriname to its west.

There are several islands off the coast of the mainland, which are the isolated Iles du Convetable bird sanctuary, and the 3 Islands of Salvation.

There are 2 local executive bodies in French Guiana – the 19-member general council and the 34-member regional council, who are all elected into office.

The capital of French Guiana is Cayenne, famous for its vibrant markets and colonial architecture. The city is also famous for its annual carnival held every first Sunday after New Year’s day. All-night parties, costume balls, afternoon parades, dancing, and parties are the highlights of the festival.

Kourou is a commune in French Guiana that’s famous for 2 things: the penal colony and the Guiana Space Center. Kourou itself has a few buildings that housed prisoners during the 1800’s to early 1900’s and the structures are open to tourists. The 3 Salvation Islands are popular tourist attractions in French Guiana with the Devil’s Island as the most popular. Tourists are not allowed here but tours around the other 2 islands are permitted. The prisons had a notorious reputation as having the toughest prison conditions in the world.

The Guiana Space Center in Kourou is also open to tourists, with scheduled tours inside the Jupiter control center, the Space Museum, and the Ariane Launch facilities. About 4 to 6 launches occur every year and tourists have the opportunity to witness rockets being launched to space.

Saint-Laurent du Maroni is French Guiana’s 2nd most populous city and it’s famous for its colonial and penitentiary architecture. Tourists get to visit the prison cells and the execution areas.

The suburb of Remine Montjoly has the best beaches in French Guiana and it’s easily accessible through the capital of Cayenne. The suburb is also home to many of the region’s wealthiest.

Education in French Guiana is free and mandatory for children ages 6 to 16. Enrollment is almost 100% except for the remote rural areas of the Amerindian villages, which have very few school facilities.

The system in French Guiana follows the French model of education where French is the medium of instruction.

Higher education is limited in the region where the only programs available are in teaching and agriculture. Most students who seek tertiary education go to France or the French Antilles for their university degrees.