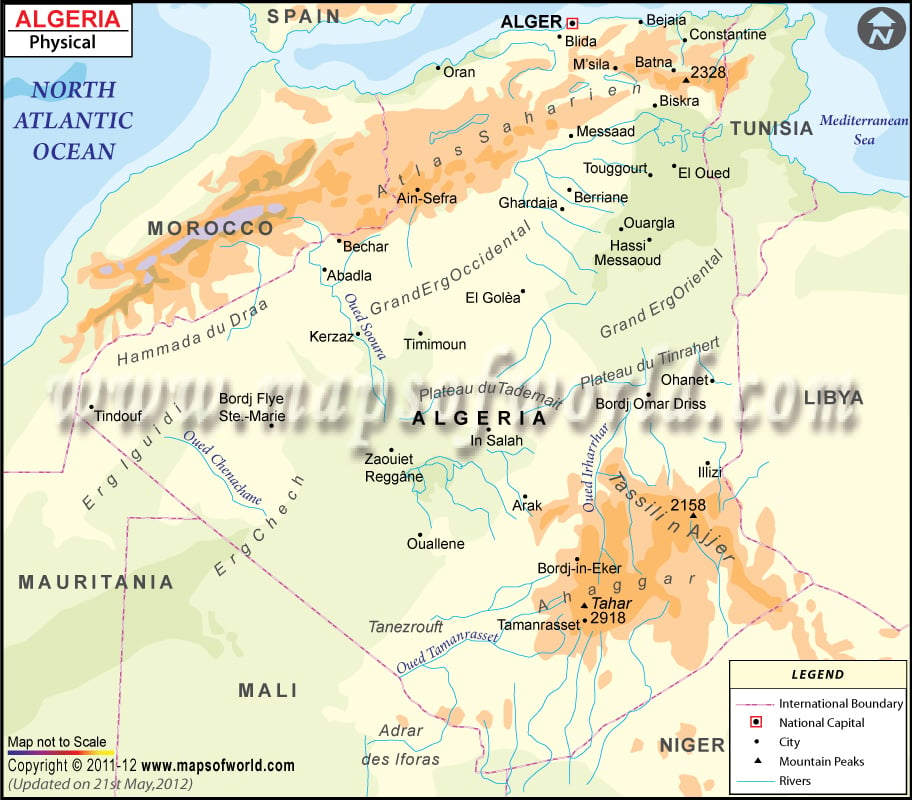 Algeria is among the most geographically diverse countries in Africa. All Mountain ranges with their peaks like Tahar, Tassili n Ajjer mountains, and more are identified on the map. National Capital Alger is also located on the map. This physical map of Algeria is the perfect reference material for those who need information regarding the country’s relief for school work or presentations.

Algeria shares a boundary to the east by Tunisia and Libya, to the south by Niger, Mali, Mauritania, to the west by Western Sahara and Morocco, and therefore the north by the Mediterranean Sea. Algeria is a vast country and is the largest country in Africa and the 10th largest globally. Algeria comprises 2,381,740 square kilometres (919,590 sq mi) of land, of which more than 80% is desert.

Algeria has a varied topography and is divided into two distinct geographic regions. The northernmost is generally known as the Tell region, has some influences of the Mediterranean, and consists mainly of the Atlas Mountains. The southern region, almost entirely desert, forms the bulk of the country’s territory and is situated within the western portion of the Sahara, which stretches across North Africa.

The mountain ranges in Algeria separate the coastal plains from the second region in the south. The fertile Tell region is the country’s heartland containing most of its cities and home to most of the county’s population. The Tell region has two geologically young masses, the Tell Atlas and Saharan Atlas, which generally run from east to west and are separated by the High Plateau. The south, consisting of Sahara, is an ancient platform of basement rock, horizontal and uniform.

The coastal ridges and massifs are interspersed with numerous bays. They are separated by plains such as the plains of Oran and Annaba that extend inland. The Tell Atlas is also not continuous; it forms two ranges separated by interior plains on the west side. Thus, the Maghnia plain set apart Tlemcen Mountains to the south from Traras Mountains to the northwest. Similarly, the plains of Sidi Bel Abbes and Mascara are snuggled between hill ranges to the north and south.

Behind the southern slopes, the extensive Sahara Desert takes up most of the country’s territory. The Sahara isn’t homogeneous but consists of many diverse areas. The northern part is somewhat sandy like Erg Iguidi in the west or the Grand Ergs. The Tademait Plateau, located at the country’s Center, is dry, high, and rocky. Furthermore, down to the south, the Ahaggar mountains lie in the southeastern part of the Sahara. It has Mount Tahat, just above 2900 meters, 9,573 feet is the highest peak in the country.

Chelif River and other Drainage System in Algeria

Almost all of the Tell Atlas region rivers are short and undergo significant variations in inflow. The largest river of the area, Chelif, which rises in the High Plateau, crosses the Tell Atlas and flows east-west through to succeed in the sea east of Mostaganem. There are only temporary rivers towards the South of  Tell Atlas (wadis). The surface runoff of these rivers ends in chotts (Salt marshes) within inland depressions. Some of the southward-flowing wadis feed the water tables beneath the Saharan surfaces, and desert oases appear in locations where the water, under hydrostatic pressure, rises to the surface in artesian wells or springs.