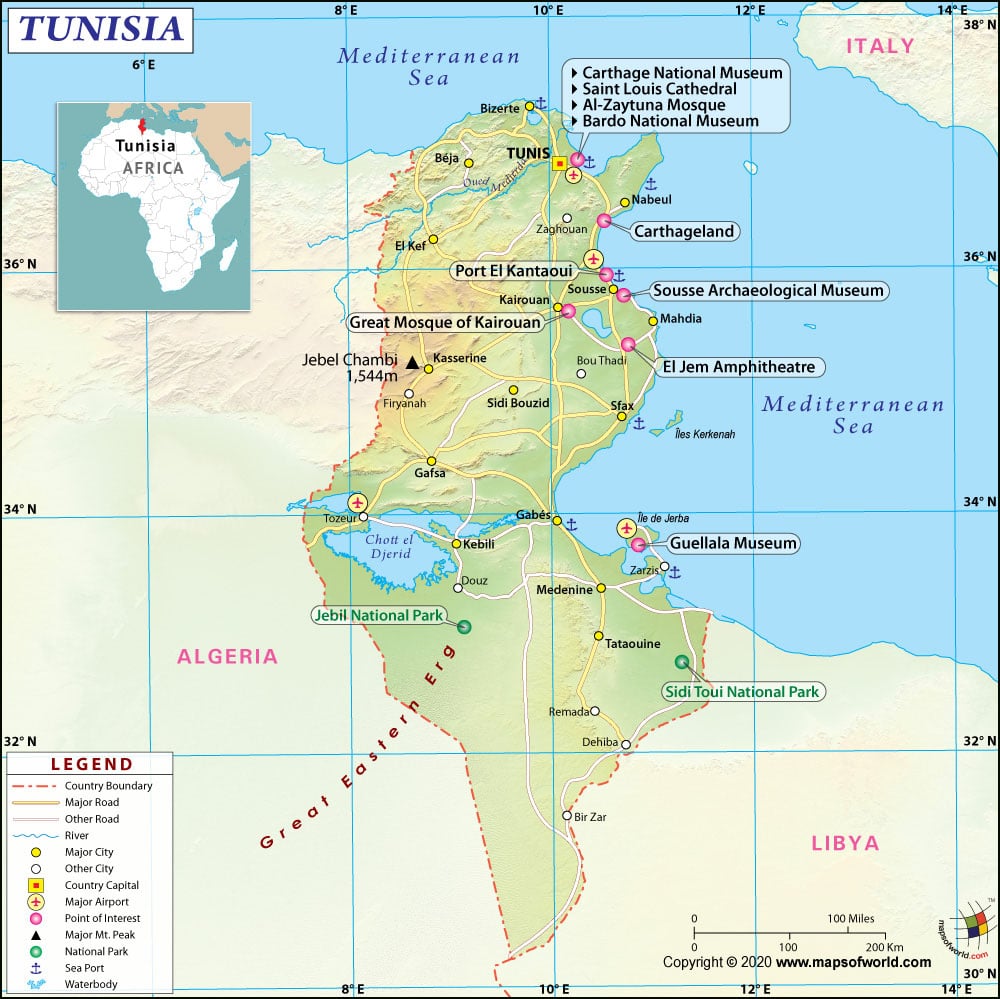 The majority population of Tunisians are direct descendants of the indigenous Barber tribes, as well as a mixture of numerous other civilizations. The first recorded history of Tunisia was the arrivals of the Phoenicians. The Phoenician empire built the city of Carthage in 814 BC, as well as other North African settlements during the 8th century. In 146 BC, Carthage was captured by the Roman empire, whose rule lasted until the 5th century. During the Roman reign, the region prospered and became an important trading center in the region.

Tunisia was shortly invaded by the Vandals before the Muslim conquest in the 7th century. By the 16th century, the Turkish Ottoman Empire conquered the region.

In 1881, Tunisia became a French protectorate. During the early 20th century, rebellions and an independent movement started to form. By 1956, the French gave Tunisia their independence, with the country’s first elections voting into office their first President, Habib Ali Bourquiba, who was the leader of the independent movement.

Tunisia is the northernmost country in Africa. Its borders are Algeria to the west, Libya to the southeast, and the Mediterranean Sea to the north and east.

The country contains the Atlas Mountains eastern ends, and the northern portion of the Sahara Desert. Tunisia has a total of 1,148 km of coastline, low, rolling hills and plains in the northern regions, a vast desert in the southern region, while the rest of the land is fertile soil.

Tunisia is a constitutional republic. There has only been 2 Presidents of Tunisia since their independence, and before 2014, their constitution was adopted from the French system since 1959.

The President of Tunisia is Head of State, while the Prime Minister is Head of Government. Tunisia has a unicameral parliament, and a civil law court system.

On January 6, 2014, Tunisia adopted their new constitution, guaranteeing rights to women, and stating that the President’s religion must be that of Islam. The country’s first elections under the new constitution happened on October 2014.

Tunisia is one of the most preferred travel destinations in Africa due to the mix of beautiful Mediterranean beaches, historic and religious monuments, and for their affordable luxuries.

Tunis is the country’s capital, with the Ancient City of Tunis one of the country’s most popular tourist attractions. The old city of Medina houses 700 monuments that include palaces, mosques, fountains, and mausoleums.

Carthage is by far the country’s most famous site for Roman architectural ruins. The seat of the Phoenician empire, Carthage’s Roman ruins are situated on the shores of the Mediterranean, providing beautiful scenery amidst the old structures. A former palace, ampitheater, theater, garden, and baths make up the Roman center.

Hammamet is Tunisia’s largest tourist resort city, known for its beaches, water sports, and swimming. Al fresco dining and late night discos are a way of life, and the summer season is filled with fun festivals that attract thousands of visitors every year. Nicknamed the “Tunisian St. Tropez”, Hammamet boasts of being Tunisia’s first tourist destination.

The city of Kairouan is popular among tourists for a different reason. One of the world’s most important cities in the Islamic world, it’s famous for its large mosques, cultural history, and for being a UNESCO World Heritage Site.

Education is valued in Tunisia and considered to be one of the government’s top priorities. About 6% of the country’s GNP is dedicated to education. Since 1991, education has been free and compulsory for children ages 6-16. Standard Arabic is the language of instruction in Tunisian schools, while French is taught by the age of 8, and English is introduced by the age of 12.