Algiers is the capital, commercial hub, and cultural center of Algeria. Besides, it is also noted for being the largest city of Algeria. It covers an area of 363 sq… 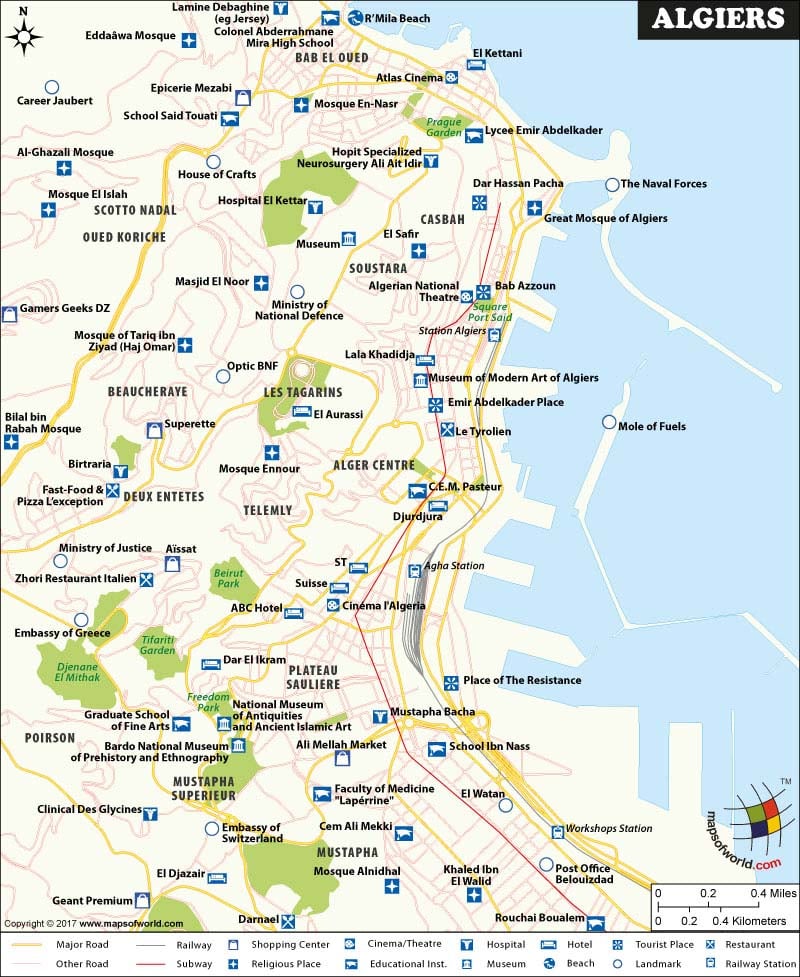 Algiers is the capital, commercial hub, and cultural center of Algeria.
Besides, it is also noted for being the largest city of Algeria. It covers an area of 363 sq km and had an approximate population of 3,415,811 in 2011. The city was originally a harbor, much used by the pirates and even today, it is the most important part of the country.

Algiers was originally founded by the Phoenicians as a part of their North African colonies. It was then named Iconium. In the 16th century, it became a refuge for the Moors expelled from Spain. In 1529, the town was seized by Barbarossa – a Turkish corsair, who placed the town under the authority of the Ottoman Empire. Under his regime, Algiers turned into a favorite base for the Barbary pirates for the next 300 years. The Europeans tried to quell the piracy and finally, it was captured by the French in 1830. Algiers remained the capital of the French colonial empire in Africa. Finally, in 1962, Algeria became independent and Algiers became its capital.

Algiers is situated on a bay of the Mediterranean Sea on the coast of North Africa. The town rises from a number of small islands, which have now merged together to the steep slopes of the Sahel Mountains. The city faces east and north, and glistening white buildings form an amphitheater. This is why the French called the city, Alger La Blanche (Algiers, the White).

The city enjoys a Mediterranean type of climate. Summers are warm and dry while winters are mild and wet. Most of the rainfall occurs between October and April. The moderating influence of the breeze from the Mediterranean Sea helps Algiers to avoid the extremes of temperature that are common in the nearby deserts.

You can travel to Algiers by the following means:

The best time to visit Algiers is during winter because the climate is most pleasant. However, nights can be quite cold for which heavy clothing is essential.

Culture (Fairs and Festivals) and Traditions

While the old parts of Algiers bear the mark of its long and eventful history, the modern quarters around the harbor are completely different. The city is very active and bustling. Some of the festivals which are celebrated in or near the city are as follows:

Some of the most interesting sights of Algiers are as follows:

Those eyeing a comfortable trip can find quite a few good places to stay in Algiers. For a luxurious stay, you can count on 5-star options like El Aurassi and Sofitel Algiers Hamma Garden. Those traveling on a lesser budget can go for 3-star options like Samir, Dar el Ikram, and Dar Diaf Alger.