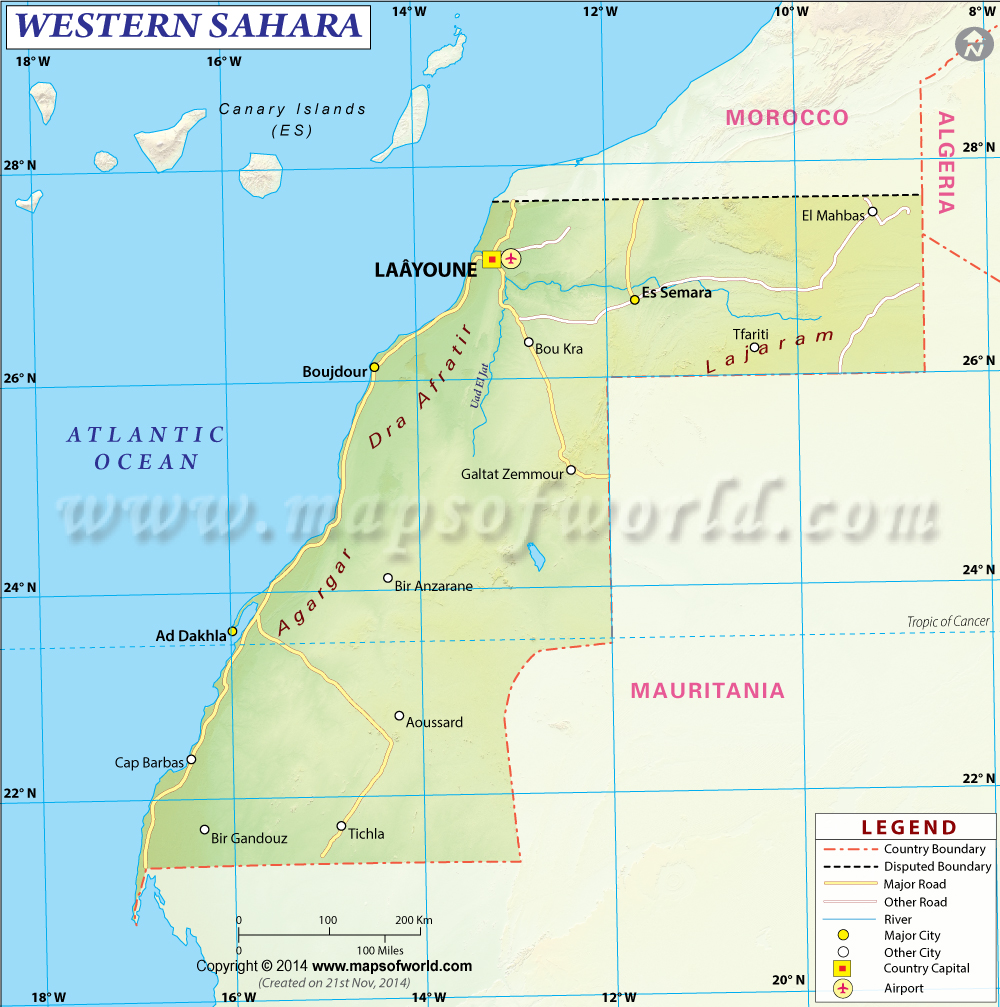 The direct descendants of the Saharawis people of Western Sahara were tribes from Yemen who crossed North Africa. The people had always remained independent but a formal nation was never established.

The Spanish came in 1884, who claimed a protectorate over the coastal regions, and eventually gaining more control of the territory. The region was then named Spanish Sahara.

In 1973, Spain had lost control over the countryside due to the guerrilla army of the Polisario Front – which is a nationalist organization in a mission to make the Western Sahara territory fully independent.

In 1975, Spain and the Polisario Front were negotiating terms to hand over power but at the same time, Morocco and Mauritania were also claiming the region as part of their territory.

The United Nations got involved and asked the International Court of Justice for their advisory opinion. The verdict came out in October 12, 1975, declaring that Morocco and Mauritania does not have the rights to the territory and declared the Saharawi people as the true owners of the land.

This was not accepted by Morocco and Mauritania and on October 31st, Morocco sent an army to attack Polisario Front positions. On November 6, Morocco sent 350,000 Moroccan people accompanied by the heavily armed Moroccan army to the border of Western Sahara. This led to Spain giving in to the demands of Morocco, where the 2 nations signed a treaty called the Madrid Agreement, dividing the region between Morocco and Mauritania.

The Agreement was signed without consulting the Polisario Front, leading to violence and war. When Mauritania gave up their part of the territory, Morocco claimed the land and the war continued. Today, Morocco refers to the region as Moroccan Sahara. A UN-backed cease-fire has taken into effect since 1991.

Western Sahara is located on the northwest portion of Africa. It has a coastline on the west facing the Atlantic Ocean, and its borders include Algeria to the east, Morocco to the north, and Mauritania to the south.
Most of the region’s land is flat desert with small hills and mountains in the south and the northeast parts of the territory. Its landscape is mostly arid and its coastline consists of rocky cliffs.

The legal status of Western Sahara’s territory is currently disputed and its sovereignty is still unresolved. Displaced Saharawis have been living in refugee camps for the past 3 decades.

The region has been under the de facto administrative control of Morocco since 1979, and the Sahrawi Arab Democratic Republic has been declared by the Polisario Front as a government in exile in Algeria.

Western Sahara isn’t a very popular travel destination. About 80% of the land consists of the Saharan desert, which is often inhospitable. But for travelers who want to wander off the beaten track, the region can be an experience of a lifetime.

The city of Ad Dakhla in the southern part of the country is popular for its wide range of tourist activities. Among these are kite surfing, wind surfing, trips to the desert, as well as out of town excursions such as staying at bungalow hotels in a nearby lagoon. The city itself is filled with cafes, street shops, and a few patisseries are also found here.

The city of Laayoune is the largest city in the region. Despite it being the largest city, it’s pretty small and places can easily be navigated on foot. It is found on the northern coast, but don’t expect it to have beaches as Western Sahara’s coastline is not conducive for swimming.

Tarfaya is a small town and used to be the administrative capital of the region. It can be a little hard to reach because of unpaved roads but getting there will be an adventure all on its own. The town is most famous for being the place where The Little Prince author, Antoine de Saint-Exupery, was stationed in 1929. A small statue of an airplane on the beach commemorates the writer. Another popular tourist site in Tarfaya is Castle Dar Mar – a 200-year old castle that sits on the ocean.

Literacy rate is at 90% among the Sahawari population due to the nursery schools, primary schools, and 2 secondary boarding schools that were built in the camps.

Sahawari students who wish to proceed to higher learning can do so in other countries who offer foreign aid to the refugees.

In Moroccan-controlled Saharan territories, education is free and compulsory for children ages 6-15 since 2002.