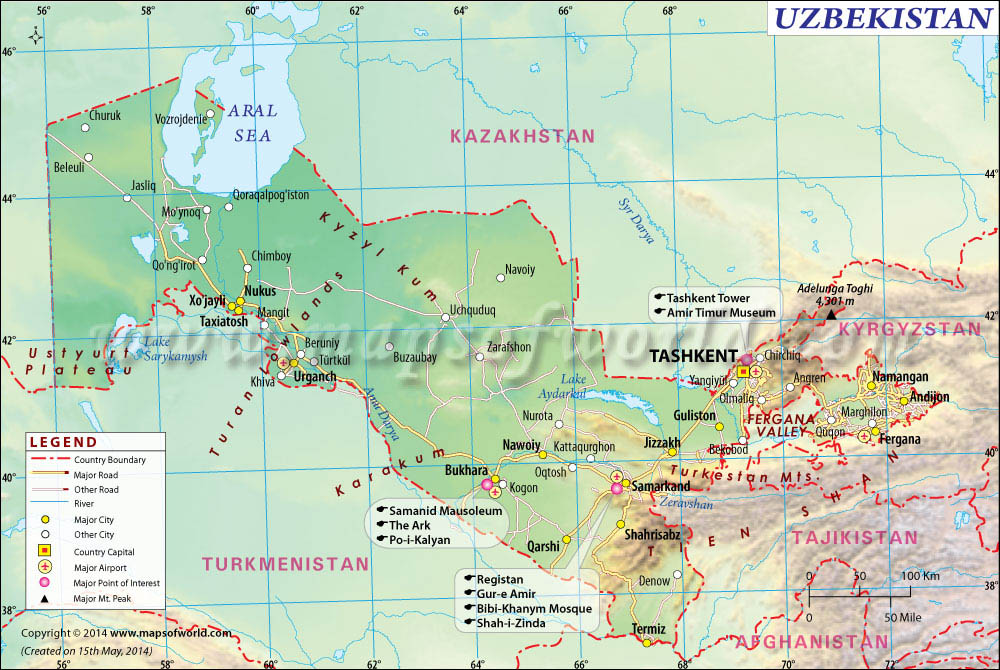 Explore this Uzbekistan map to learn everything you want to know about this country. Learn about Uzbekistan location on the world map, official symbol, flag, geography, climate, postal/area/zip codes, time zones, etc. Check out Uzbekistan history, significant states, provinces/districts, & cities, most popular travel destinations and attractions, the capital city’s location, facts and trivia, and many more.

Uzbekistan features among some of the most famous and ancient civilizations; the Silk Route paving its path within the country too. However, Uzbekistan has had a chequered yet turbulent history. Uzbekistan finally gained freedom from Russia in 1991.

The country of Uzbekistan is primarily desert-land. Being landlocked makes sustenance all the more difficult. There are mountainous and hilly regions too. There are lowlands in the west of Uzbekistan. Rivers in Uzbekistan are not perennial ones, the major ones being Amu Darya and Syr Darya. The only vast water body, the Aral Sea, is fast disappearing too. The only arable land in Uzbekistan is positioned between the northeast and southeast mountains.

Uzbekistan is located in the south-west region of the Asian continent – better known as the Middle East. It is so positioned that portions of the country are to be found both in the northern and eastern hemispheres.

The immediate neighbors of the Uzbekistan are Kazakhstan, Tajikistan, Kyrgyzstan, Afghanistan and Turkmenistan.

The flag of Uzbekistan is simple in design. It is made up of four colors – green, blue, white and red. The flag comprises of three horizontal stripes of the colors blue, white and green (from top to bottom). Thin red stripes appear on either sides of the white middle stripe. On the top blue portion of the flag, are a white crescent new moon and twelve five-point stars. Each star stands for one month of the year each. The color represents water and sky; white is symbolic of peace; green stands for fertility and red represents the people of the nation.

The climate of Uzbekistan is primarily that of a desert. So, summers are scorching and winters range between cool to cold. Rain is pretty scarce, and occurs between July and September which are the late winter and early spring months.

Flora and Fauna of Uzbekistan
Most of the flora and fauna that once existed is now practically non existent. Wolf and the big-eared hedgehog are some of the remnant fauna. Apart from cotton, there are some 4800 species of plants that are capable of sustaining themselves even in arid weather.

The people of Uzbekistan belong to diverse ethnic races and categories – remnants of their rich and also chequered history. In totality they are made up of Uzbeks, Russians, Tajiks, Kazakhs, Karakalpaks, Tatars and many others.

Arts, Culture and Music of Uzbekistan

Uzbekistan has an undisputable cultural and traditional heritage stretching across centuries. The remnants are still clearly visible in even in the modern day Uzbekistan. “Shashmaqam”is the traditional music form of Uzbekistan. The Shashmaqam literally translates as ‘six maqams’ or six different modes of music brought together in one song. This type of music has similarities with Persian and Sufi music; in fact Sufi poetry is a strong component of the shashmaqam.

Despite having a fragile economy with limited resources, the factors that boost Uzbekistan’s economy are a host of things that can bring in large revenues if organized well. Some of these are natural gas, petroleum, coal, gold, uranium, silver, copper, lead and zinc, tungsten, molybdenum, textiles, food processing, machine building, metallurgy, chemicals and silk.