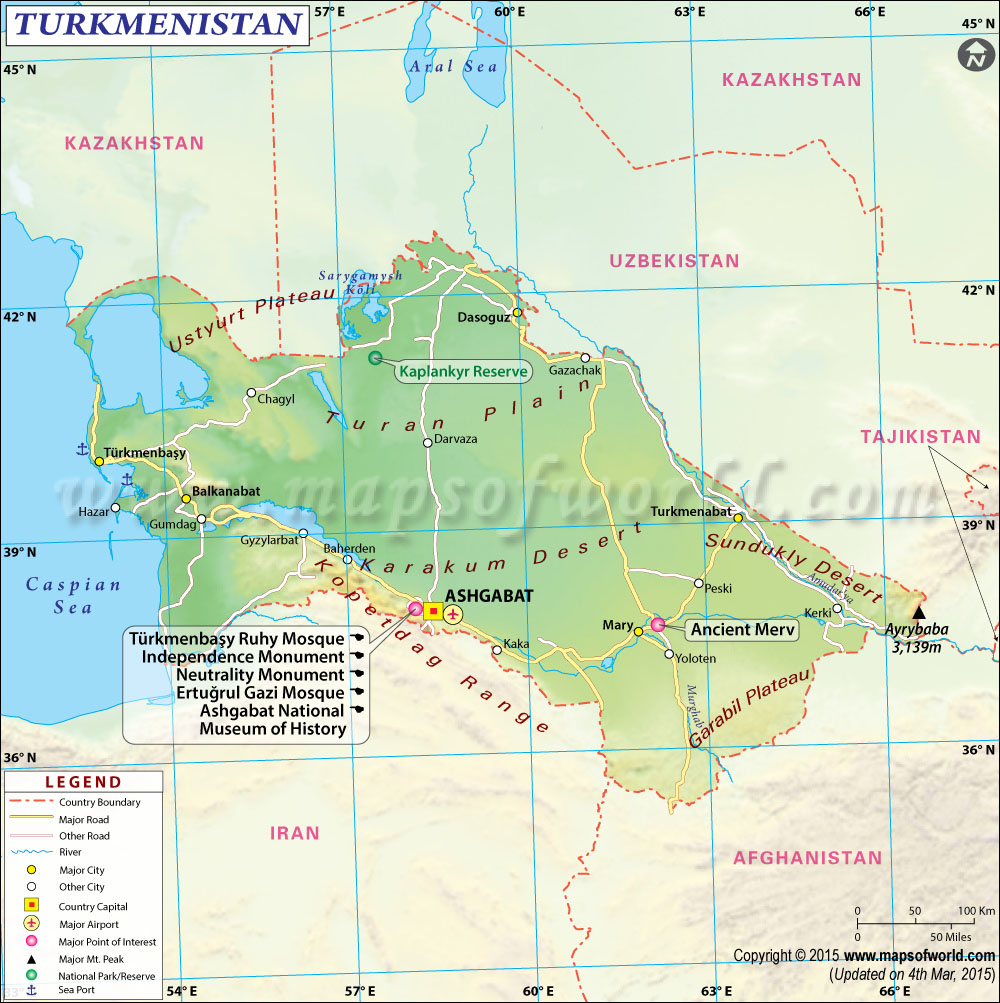 Explore this Turkmenistan map to learn everything you want to know about this country. Learn about Turkmenistan location on the world map, official symbol, flag, geography, climate, postal/area/zip codes, time zones, etc. Check out Turkmenistan history, significant states, provinces/districts, & cities, most popular travel destinations and attractions, the capital city’s location, facts and trivia, and many more.

Turkmenistan is named after the tribe of people inhabiting the land. They were tribal nomads called the Turkmen. So, “Turkmenistan”literally translates as the ‘land of the Turkmen’. Once a part of the USSR, it attained freedom in 1991 when the Soviet disintegrated. Ever since, President Saparmurat Atayevich Niyazov has held dictatorial power over Turkmenistan.

The first picture of Turkmenistan’s landscape that comes to mind is that of vast stretches of sand and scrub punctuated by a rare oasis. The Kara Kum desert reigns supreme. Lorded over by such a landscape, the land has little propensity for agriculture. The Caspian Sea is the only single large source of water; the other lakes, like the Sarykamish Lake, and rivers, like the Amu Darya, in the country though do contribute their share too. There are mountain ranges – the Kopetdag Mountain Range – to be found in the southern region bordering Iran. To its east are the Pamir Mountain Range and the Gora Ayribaba, which is the highest point in Turkmenistan.

Turkmenistan is located in the central region of Asia, which is better termed as the Middle East. It is so located that parts of the country are to be found in the northern hemisphere as well as in the eastern.

Its immediate political neighbors are Kazakhstan, Uzbekistan, Afghanistan and Iran.

the flag of Turkmenistan is a crisp representation of its identity. The flag is rectangular in shape and has a green backdrop. On the left side, covering the length of the flag is a vertical band containing five different patterns of carpets. Below the patterns are two crossed olive branches. To the immediate right of the carpet band are a crescent white moon and five white five-pointed stars. The olive pattern was a late addition. The moon is representative of the country’s Islamic culture, while the stars stand for the five regions of the country. The flag has been in use since February 1997.

The Kara Kum desert dominating all else, it is only expected that Turkmenistan should have a desert oriented sub-tropical climate. The area and also the atmosphere of Turkmenistan are extremely arid. Soaring day-time temperatures of 50°C, for instance, is not uncommon. Precipitation is almost nonexistent with annual rainfall never exceeding 25 cm. all of it received in the winter months. Winter temperature is the opposite extreme with temperatures dropping to 20°C or less. The summer months last from May to September, while winter takes over between October and March.

Flora and Fauna of Turkmenistan

Given the fact that most of the country of Turkmenistan is shrouded by the arid Kara Kum desert, the presence of flora and fauna is practically negligible. If at all, the plant life comprises of cactus or thorny shrub based vegetation – in short, any plant that is capable of surviving without rainfall for long spells of time. Due to desert topography, the animals to be found around are of the useful kind. So, you get to see considerable numbers of goats, camels and sheep. The other animal the Turkmenistan is renowned for is the horse – especially the Akhal-Teke which is a sturdy breed of equine originally used for warfare. Now though it is bred as a race horse.

The people of Turkmenistan are originally nomadic Turkmen. Though the majority of them are Muslims of the Sunni sect, little of their Muslim identity can be detected as they combine their adopted faith with a pre-dating animist belief which is steeped in spirituality. As per tradition, the ancestors of the people of Turkmenistan were nomads who were famous because they engaged in the process of breeding sturdy horses.

Arts, Culture and Music of Turkmenistan

The songster is a nomad performing his art by traveling from one place to another. They are called the ‘Bakshy’ which means ‘healer’ or ‘magician’. The chief instrument that accompanies the songs are the ‘Dutar’. Another type of classical music in turkmenistan is the ‘Mugam’.

Despite having quite a barren landscape, Turkmenistan scores in its production of cotton and natural gas. Half of its agricultural land is completely dedicated to the production of cotton. In fact, it also ranks as the tenth largest cotton producer in the world. As far as its gas reserves are concerned, it has world ranking there too – being the fourth largest. Aside of these, the only other industry that makes a significant contribution to the economy of Turkmenistan is its fishing industry and also its carpet industry.