Explore map of Budapest, it is the largest city and capital of Hungary, and one of the largest cities in the EU. It is the country's principal cultural, commercial, industrial, political, and transportation centre. 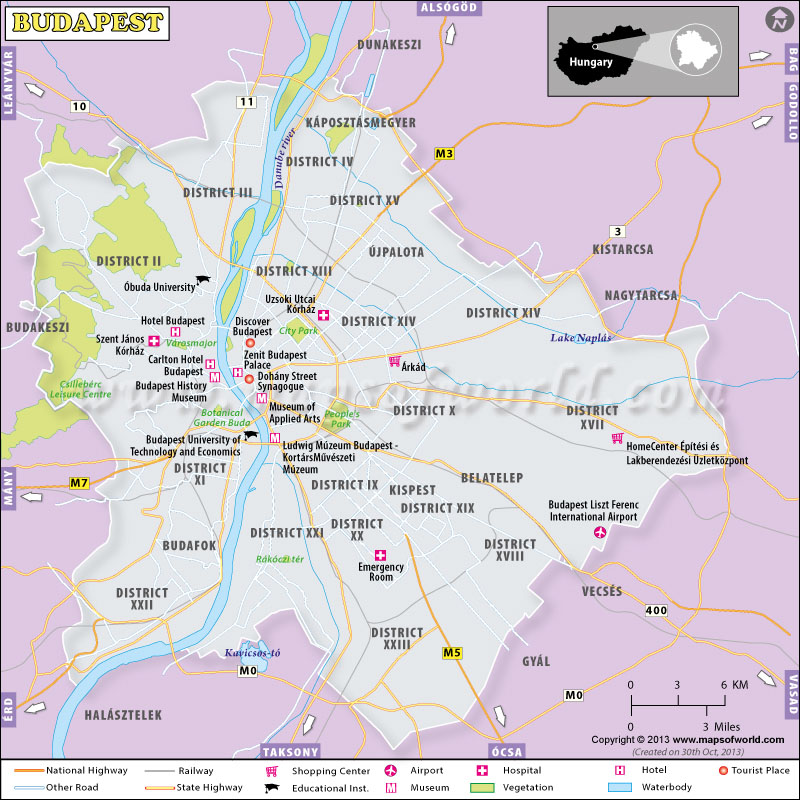 Budapest is the capital of Hungary and one of the largest cities in the European Union. Budapest was formed in 1873 unifying the cities of Buda and Obuda on the western banks of River Danube along with Pest which lies on the eastern banks of the river.

It was first occupied by Celts during the 1st century. The Kingdom of Hungary was founded in the 9th century after Hungarians first arrived in the area. Buda was officially established as the capital of the country in 1361. Later, in 1541, the Ottoman Turks invaded and occupied it until the year of 1718 when it came under the Habsburg Empire. In 1867, Hungary joined Austria in a constitutional monarchic union which lasted until the end of the World War I, during which Budapest acted as the joint capital of the two nations.

The city was completely destroyed during the Battle of Budapest in 1945 and it was rebuilt by 1980. Today, Budapest is home to 1.7 million people and serves as the nation’s political, cultural and industrial center. Hungarian, English, German, French and Russian are the prevalent languages here.

Budapest is situated in the Carpathian Basin sprawling over a total area of 525 sq km. It is surrounded by the settlements of Pest County. The city lies on both sides of River Danube, with the hilly banks of Buda on one side and flat plains of Pest on the other. The highest point of Budapest is Janos Hill which stands at a height of 529 m. The city is home to three islands, viz., Csepel Island, Margaret Island and Obuda Island.

The city is divided into 23 districts, of which 16 are located in Pest while 6 are in Buda and 1 in Csepel Island.

The city is served by the Budapest Liszt Ferenc International Airport which lies about 16 km from the city. It connects the city to over 30 countries via the British Airways, Air France, Jet2, Easy Jet, Delta Airlines, United Airlines, etc. From the airport, one has a variety of choices like taxis, airport train and airport minibus shuttle in order to reach the city.

Inside the city, one can avail of public buses, taxis, scooters, bicycles, the underground metro, rental cars or simply walk.

Budapest features a humid continental climate. Temperatures in summers can rise up to 30 degree Celsius and in winter fall way back to -15 degree Celsius. However, one can visit the city at all times as there are always plenty of activities to take part in, and beautiful sights to see. Springs hosts a number of traditional festivals, summers are characterized by various musical events. The city buzzes with activity during the wine festivals in autumn and the fairs and carnivals held in winters.

Budapest is at its scenic best during the seasons of spring and summer, with beautiful landscapes and pleasant weather. Autumns are accompanied by little rain and winters often bring about snowfall to the region.

Budapest is one of the most beautiful cities of Europe and is named “Pearl of Danube” and “Heart of Europe”. It is also the official “City of Spas” as the area is full of natural thermal springs. The must visit sites of the city are as follows.