The El Salvador Flag has three bands made of two colors blue and white alternatively and was officially adopted on 17th May 1912. 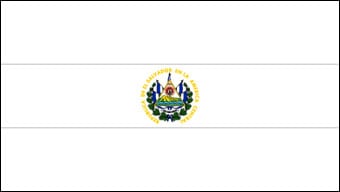 An alternate version of the flag of El Salvador has the national motto, “Dios Union Libertad” written in yellow across the white stripe instead of the coat of arms. This flag is often used as the civil flag.

Before this flag was adopted in 1912, another flag had been used, somewhat resembling the American flag. The flag had nine blue and white stripes, and the canton in the upper left was red with white stars.

Where is El Salvador