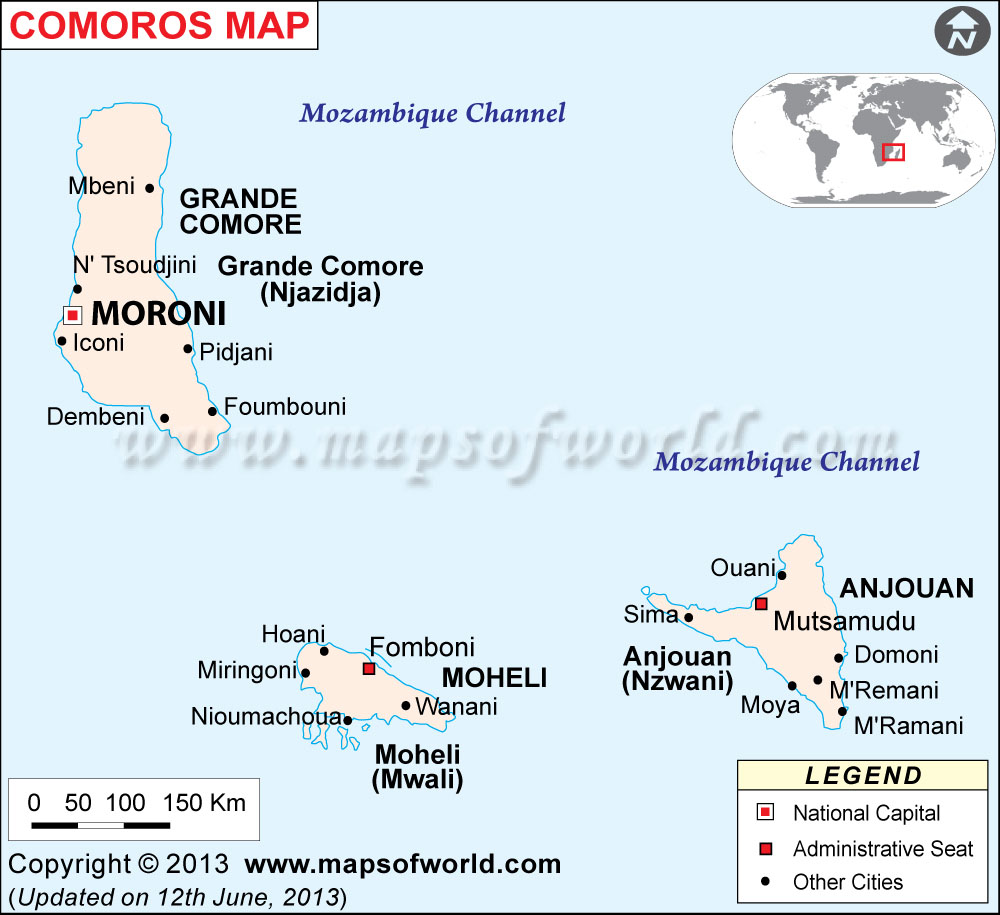 The islands of Comoros were populated by a number of diverse groups from the different coasts of Africa, from the Persian Gulf, and from Madagascar. The Swahili group arrived on the islands during the great Bantu expansion during the 1st century AD.

Arab traders soon arrived on the islands and introduced the ethnic groups to the Arab Islamic influence sometime in the 7th century. People soon converted to Islam and many mosques were built on the islands. Arabic-speaking Sunni Persians from Iran soon arrived and set up settlements on the coast.

The first Europeans to arrive on the islands were the Portuguese in 1505 but permanent settlements were never established. Upon the peak of the slave trade in the 17th century, Malagasy warriors from Madagascar raided the islands for slaves, but eventually settled sometime in the late 1700’s and seized control of the archipelago.

The French arrived in 1841 and by 1912, the archipelago became a French colony. In 1973, an agreement was made to give Comoros its independence in 1978. Of the four original islands of the archipelago, only 3 voted to become independent while the island of Mayotte chose to abstain and to this day remains under the control of the French administration.

Comoros gained independence on July 6, 1975, earlier than the agreement through the efforts of the Comorian Parliament. However, since its independence from France, the country has faced political unrest for the past 30 years, with about 20 successful and failed coups d’etat.

Comoros is an archipelago found on the Indian Ocean, in a location between Mozambique and Madagascar. It is also close to Tanzania, which is found to the northwest, and Seychelles to the northeast. There are no land boundaries and the country consists of 3 major islands and other smaller minor islands.

The 3 islands are Ngazidja or the Grande Comore, Mwali or Moheli, and Nzwani or Anjouan.

Comoros is a federal presidential republic with the President as head of state and head of government, and that of a multi-party system. The President is elected into office through popular vote and serves a 4-year term. A Vice-President is also elected but his duties are mainly ceremonial and does not hold actual power.

Comoros is one of the world’s least visited countries. About only 3,000 people visit the islands each year, and most of them travel for family and other personal reasons. Many people from Comoros have migrated overseas and they make up a large number of travelers who go the islands each year. International tourists are mostly those who want to travel to countries that are off the beaten path or those who are on a mission to visit each country in the world.

The country has very little tourist infrastructure and travelers are often left to their own devices in terms of accommodation and traveling from one place to the next. The country has spectacular beaches with hotels but there aren’t a lot of choices.

The most economically developed in Comoros is the biggest island of Grand Comore. Despite having modern amenities such as hotels, the attractions are pretty much unspoiled and quiet, such as nearby beaches and pretty villages. The most notable of these are Itsandra, with its white sands, and the East Coast. The Volo Volo Market is the best place to shop for local produce and handicrafts and several nightclubs are also available in this city.

A must site to see and visit is Mount Karthala – the largest active volcano in the world with a crater diameter of about 1 mile. It erupts frequently and its most recent eruption in the 21st century caused the creation of a spectacular desert landscape.

Mwali is the smallest island in Comoros and its known for its unspoilt beaches and clear aquamarine waters. It is home to the Moheli Marine Park, which is the first protected area in the country.

Education is compulsory for children ages 7 to 16 but the government does not enforce attendance. Boys are also given more preference in terms of access to education.

Children are often exposed to Quranic schools before they begin formal education. They get to learn the laws of Islam, as well as the Arabic and Latin languages.

Since independence and the exit of French teachers, the country has suffered from untrained teachers and poor school facilities.