Moroni is the federal capital and the largest city of the Union of the Comoros, an archipelago in the Indian Ocean. It is also the seat of the government of… 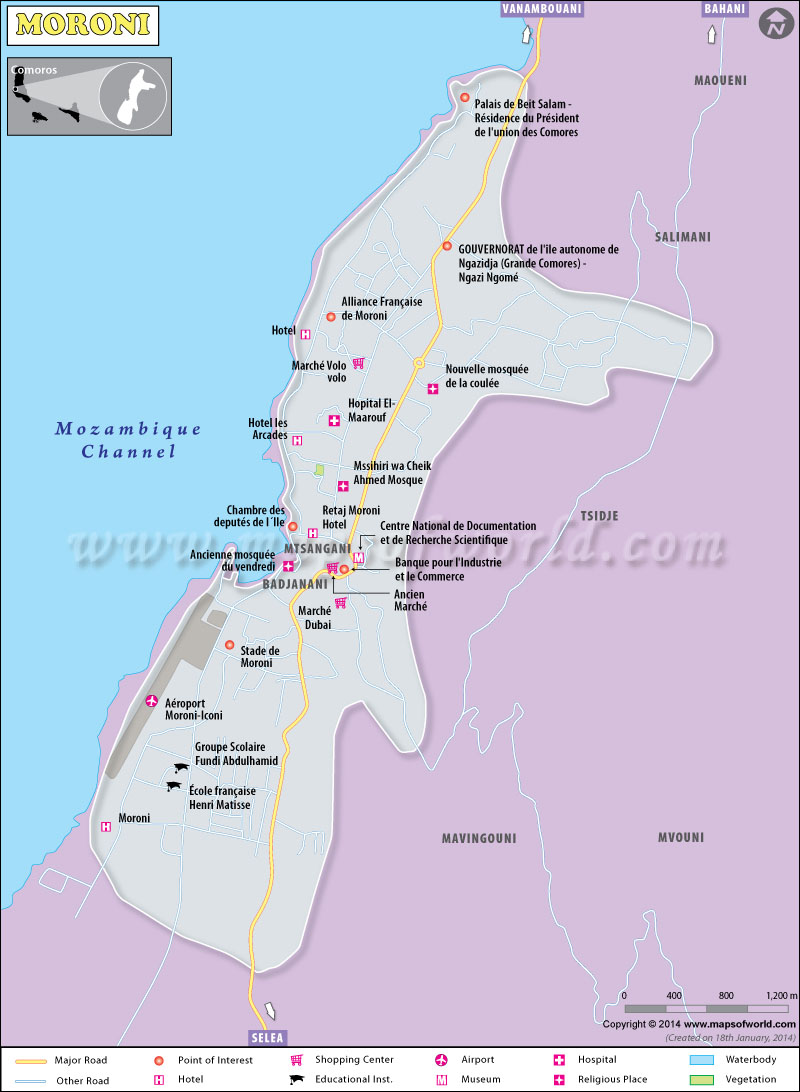 Moroni is the federal capital and the largest city of the Union of the Comoros, an archipelago in the Indian Ocean. It is also the seat of the government of the nation. Moroni is the capital of the island Grande Comore, which is the largest of the three islands that make up the republic.

Moroni was founded during the 10th century by Arabic settlers as the capital of a sultanate connected commercially to Tanzania. Moroni succeeded Dzaoudzi as the the administrative capital of Comoros in 1958. Violence in Moroni broke out in April 1999 over the refusal by the Anjouan representatives of an agreement on autonomy to the three islands. The Moroni Agreement on Transition Agreements was signed by the President of the Union of Comoros in December 2003. The Hamramba School was constructed in Moroni by the U.S. Navy’s Seabees in 2010 as a part of a humanitarian project.

At present the city is home to around 54,000 residents. The prevalent religion here is that of Islam. Arabic and French are its official languages.

Moroni is situated on the western coast of Grande Comore. It has a rocky volcanic coastline and is located at the foot of Mount Karthala, one of the largest active volcanoes in the world, at an elevation of 29 meters. Moroni covers an area of 30 sq. km and has a small beach towards the northern part at Itsandra.

The only airport that serves Moroni is the Prince Said Ibrahim International Airport, which is located at Hahaia, about 15 km north of the town. Kenya Airways, South African Airways, Air Mauritius and Qatar Airways are some of the airlines that operate international flights to this airport. However, the local airlines, Air Services Comores and Comores Aviation operate between the islands. There is also a small harbor that provides regular transport to the African mainland and the other islands in the Comoros archipelago.

The best way to discover this port town is by walking through it. Renting a motorbike can also be another option.

Moroni experiences a maritime tropical climate, marked by warm temperatures and heavy rainfall throughout the year. However, the ideal time to visit this place is during the months of August, September and October, when the rainfall is comparatively lower and the weather in general is pleasant.

Comoros being an Islam nation, majority of the festivals celebrated in Moroni are those belonging to the Islamic calendar, like the New Year in February, Eid al-Adha, and Eid al-Fitr at the end of the holy month of Ramadan. Independence Day is celebrated on July 6 with feasts, traditional music and dance, that showcase their land’s rich culture.

Accommodation in Moroni can be easily availed of in the various hotels present there, among which the most notable ones being Itsandra Beach Hotel, Retaj Moroni Hotel and Karthala International Hotel. Apart from these there are also some guest houses and motels that offer accommodation facilities at a reasonable rate.