The neighboring countries of Zimbabwe are South Africa, Botswana, Namibia, Zambia, and Mozambique. It is made up of eight provinces and two cities with provincial statuses - Harare and Bulawayo. Harare is also the capital of Zimbabwe. 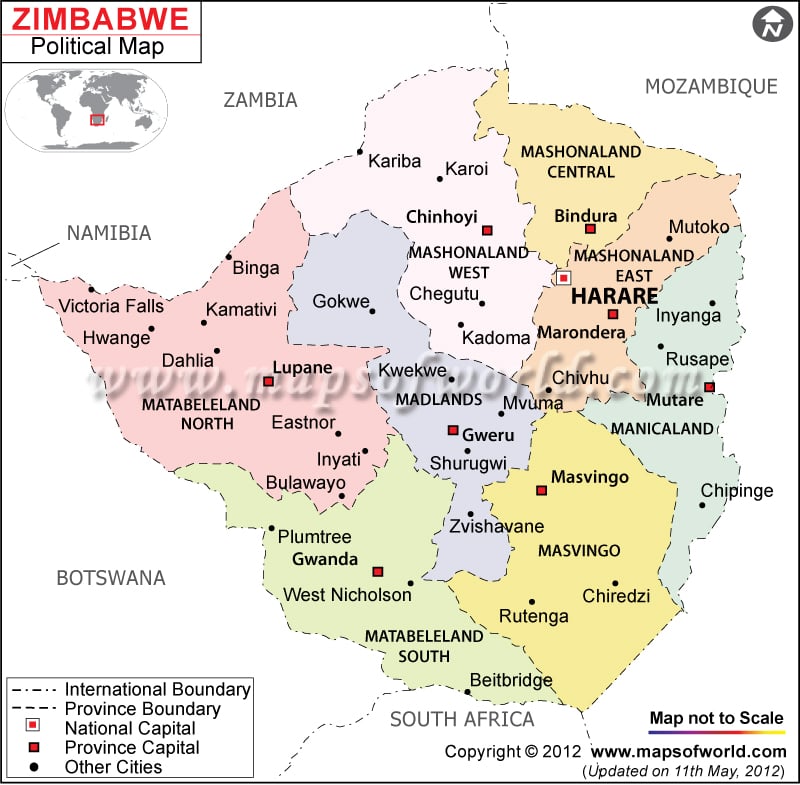 The neighboring countries of Zimbabwe are South Africa, Botswana, Namibia, Zambia, and Mozambique. It is made up of eight provinces and two cities with provincial statuses - Harare and Bulawayo. Harare is also the capital of Zimbabwe.
0FacebookTwitterPinterestEmail

Zimbabwe or the Republic of Zimbabwe is a sovereign country in Southern Africa. It is a landlocked country, situated in the southern territory of the African continent.

Previously, the country was known as Republic of Rhodesia or Southern Rhodesia. It lies amid Limpopo and Zambezi Rivers. There are three official languages in the country: Shona (the Bantu language with the majority of aboriginal people), English, and Ndebele (another Bantu language).

About Zimbabwe Map
The Zimbabwe Political Map shows the capital city and provinces of the country and the bordering countries have been indicated with respective symbols. The country is bounded by Zambia to the northwest, South Africa to the south, Botswana to the southwest, and Mozambique to the east.

A Zimbabwe map clearly shows that the country is a landlocked republic in Southern Africa, situated amid latitudes 15° and 23° South, and longitudes 25° and 34° East. Majority of the land area of the country is raised in the central highland (known as high veld) extending from the southwest to the northwest at elevations varying between 1,200 and 1600 meters. The eastern portion of the republic is hilly. It is home to the tallest summit in the country (Mount Nyangani). The elevation of the peak is 2,592 meters. Approximately 20% of Zimbabwe comprises the low veld below 900 meters.

One of the most magnificent waterfalls in the world, Victoria Falls, is situated in the northwestern portion of the country as a segment of the Zambesi River. Zimbabwe features a tropical weather with a rainy season normally from November to March. The weather is influenced by the elevation.

Zimbabwe Capital
The capital of Zimbabwe is Harare. The national capital is the commercial hub of the country and is also the largest city of Zimbabwe. The city has been host to many international summits like Commonwealth Heads of Government Meeting in the year 1991. The city is served by Harare International Airport. The geographic coordinates of Harare are 17° 51′ 50″ South latitude and 31° 1′ 47″ East longitude. The capital city is located 4,786 feet above sea level.

Zimbabwe Provinces and Province Capitals
There is a centralized government in Zimbabwe and the country is divided into eight provinces. Every province has a provincial capital from which the administrative activities are performed. The eight provinces of the country along with their capitals are given below:

Two cities have achieved provincial status for administrative purposes and they are Bulawayo and Harare.

The important cities of Zimbabwe have been highlighted in the political map of the country by black dots. Some of them are listed below: