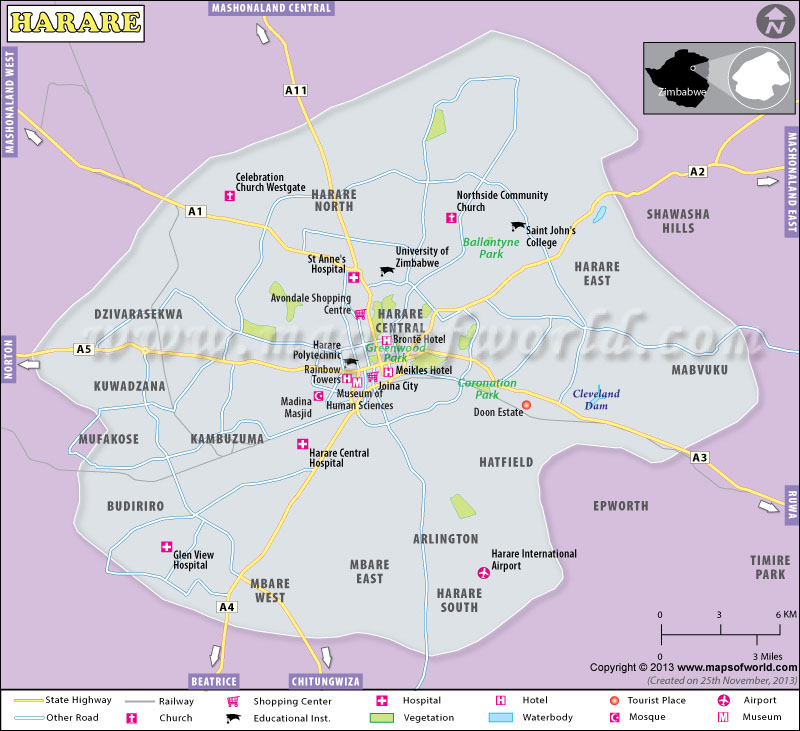 Harare is the capital of Zimbabwe. The city was a fort when the Pioneer Column founded it in 1890. The city was formally known as Salisbury. It became a city in 1935 and was made the capital of the Federation of Rhodesia and Nyasaland from 1953 to 1963. The city was renamed Harare on April 18th, 1982 during the second anniversary of Zimbabwean independence. The name has been taken from the Shona chieftain Neharawa.

Harare was politically and economically affected in the early 21st century. In May 2005,the Zimbabwean government demolished the shantytowns in the other cities of the country, resulting in a sharp reaction from the international community. The Harare is the largest city in Zimbabwe and is also the administrative, commercial and communications center of the country.Geography of Harare :
The city of Harare is situated in the northeastern part of Zimbabwe. Harare is also the capital city of Zimbabwe. As per the Harare geography, the city lays on the geographical coordinates of 17° 50′ South and 31° 03′ East latitude and longitude respectively. It is situated at an elevation of 1480 meters (4858 feet) above sea level.

Harare is set above the lowlands of the Zambezi River in the north and Limpopo River in the south. The geography of Harare features that it lies on a high-lying plateau. Harare enjoys a warm and wet season from November to March/April, cool and dry climate from May to August and a hot and dry climate in September/October. Manyame River is a major river of Harare that flows in the southwestern part of the city.

Some of the nearby cities and towns of Harare are:

History of Harare :
As per the history of Harare, the city was founded in 1890 by Pioneer Column, which was a military volunteer force organized by Cecil Rhodes. This force was led by Major Frank Johnson. Harare was given the status of a fort at that time. It was then known by the name of ‘Fort Salisbury’. The name was kept after the then British Prime Minister, 3rd Marquess of Salisbury.

After sometime, the place was known only as ‘Salisbury’. In 1897, Salisbury was declared as a municipality. Railway was introduced in Salisbury in 1899 in the month of May. Cleveland Dam built the Seke Dam in 1913 to introduce piped water in Salisbury. In course of time a locomotive steam boiler was established for supplying electricity. By 1935, a number of industries and factories came up in the region. It was in the year of 1935, that Harare was declared as a city. According to the history of Harare, it served as the capital of the Federation of Rhodesia and Nyasaland for ten long years from 1953 to 1963. Thereafter, it became the capital city of Southern Rhodesia. Zimbabwe achieved its independence on 18th April, 1980. On the same day in 1982, Harare got its current name. The name Harare has been derived from the Shona inhabitants Neharawa. They used to inhabit at ‘The Kopje’, on which the city of Harare stands presently.

Due to the pleasant weather, the city is also known as the ‘Sunshine City’. As per the contemporary history of Harare, it is one of the developed cities of southern Africa with a multi-ethnic character.

When to Visit :
Best Time : Spring or winters (May to August)
The weather of Harare is pleasurable almost throughout the year. The climate of Harare can be divided into three, warm and wet season from November to March/April, somewhat cool and dry months from May to August and a hot and dry season in September/October. The average annual temperature of Harare is low due to the influence of the south-easterly cool winds. It stands at 17.95°C. This low annual temperature is also due to the fact that Harare is located at a high altitude.

Harare climate supports the growth of natural vegetation of open woodland. July is the coldest month in Harare while October is the hottest month of this city of Zimbabwe. The month of January is the mid-summer time in Harare. The temperature during July varies from 7°C to 20°C and that during October ranges between 13°C and 28°C. January witnesses a temperature varying from 15.5°C to 25°C.

According to the Harare weather conditions, a little rainfall takes places in the months of May to September. The average annual rainfall in Harare is approximately 825 millimeters in the south-west and 855 millimeters on the higher land of the north-east. However, rainfall in the city varies from year to year.

How to Travel?
Transportation :
Most of the international flights arrive in Harare. Buses, train and taxis constitute the public transport system in the city. The best option to get around is by car, which is easier now. Fuel is freely available at most outlets for cash or through a coupon system.

By Air : Harare’s airport is the major gateway for flights into the country. Air Zimbabwe also operated a small network of domestic flights before ceasing operations.

By train : Train services have been badly hit by the economic troubles in Zimbabwe during recent years but most domestic trains are now running daily once again.

By car : A good road from Johannesburg allows easy access.

What to See ?
Places to Visit: Having a temperate climate, the city is a nice place to visit. The famous Victoria Falls – waterfall from over a 100m-high cliff, The Victoria Falls National Park, Zambezi River Bridge, Victoria Falls- rickety bridge high above the Zambezi River are the major attraction in the country that enthralls the visitors. Khami ruins, National History Museum in Bulawayo, Matobo Hills, Lake Kariba, and Great Zimbabwe-the ruins of the stone city in Masvingo are the tourist attracted places in Zimbabwe.

Major places to see in Harare are :

Where to Stay ?
Hotels: The Harare hotels situated in fine locality often serve as host to thousands of tourists visiting the city. There are many international hotels in Harare that provide world-class reception to its guests.

The well-known hotels in the city are :

Where to eat ?
The best restaurants to try when in Harare are :

Where and What to Shop ?
One of the major shopping destinations in Harare is the ‘Mbare Musika’ market. It is located at a distance of 3 kilometers from the city center, next to the main bus station. There are shops selling variety of fruits and vegetables. Besides, this shopping center of Harare also sells beautiful crafts, hand made clothes and herbal medicines.

For beautiful pieces of candles, metal bird sculptures, fabric products and wine glasses, one must pay a visit to the ‘Inside Out’. It is open from Monday to Friday from 9 am to 5 pm and from 9 am to 1 pm on Saturday.

Another Harare shopping center is the ‘Doon Estate’. Located in the industrial area of Msasa, it sells potteries, crafts, jewelries and artworks. It operates from 9 am to 4.30 pm from Monday to Friday. On Saturdays, it remains open from 9 am to 1:30 pm.

The galleries of the city sell beautiful Shona sculptures. The tourists can have pleasurable time shopping in the numerous shopping centers of the city of Harare.