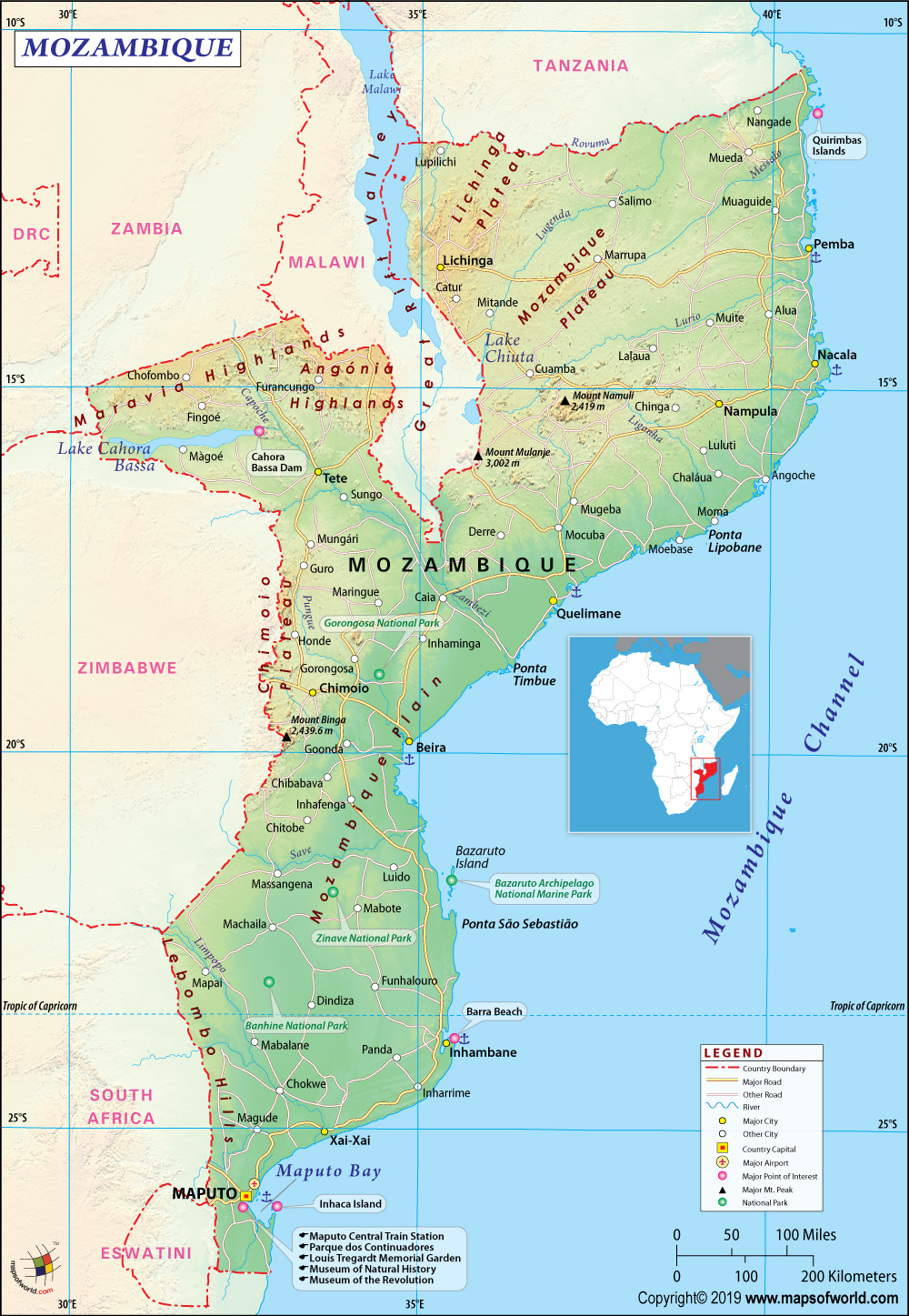 Explore this Mozambique map to learn everything you want to know about this country. Learn about Mozambique location on the world map, official symbol, flag, geography, climate, postal/area/zip codes, time zones, etc. Check out Mozambique history, significant states, provinces/districts, & cities, most popular travel destinations and attractions, the capital city’s location, facts and trivia, and many more.

Republic of Mozambique is a member of the Community called Portuguese Language Countries. At the same time it has also enlisted its name one of the Commonwealth of Nations.

The Republic of Mozambique is located in the southeastern coastal area of the African continent. The countries that are sharing their borders are Tanzania, Malawi, and Zambia in the northern side, South Africa and eSwatini (Swaziland) in the southwestern side; Zimbabwe in the western side and in the eastern region there is the Mozambique Channel. The country also borders the Indian Ocean in the eastern zone.

The flag of Mozambique is very colorful. It contains three horizontal bands. The top of them is colored in green, the middle is black and the band that is the in the bottom id yellow. On the hoist side of the flag, there is a triangle colored in red. In the middle of this triangle, a yellow colored star is featured. On the star a white book is shown along with a hoe and a rifle. All these things have their own symbolic meanings. The book signifies education and the hoe symbolizes agriculture. On the other hand the rifle signifies defense and alertness.

Before you visit Mozambique you must look for some basic details about the country’s climate so that you can understand the weather conditions and decide your visiting time. The climate of the country Mozambique can be termed as tropical to some extent. The two prominent seasons in this country are the wet season and the dry season. The weather during the months between November and March remains humid. On the other hand the months between April and October are arid. Rainfall becomes very rare in this period. In the year 1999, Mozambique faced a desolating flood.

Flora And Fauna Of Mozambique

Flora: Mozambique has great vegetation in the various parts of the country. Plants like mahogany, ebony, ironwood etc grow in large number in the forests of Mozambique. Various species of trees grow in the Mozambique climate.

Fauna: The animal life of the country Mozambique is also very rich with various unique species. The mountainous regions are epically known for different types of animals. Many species of Elephants, water buffalo, giraffes, zebras, lions etc are found in a large number in the country. Hippopotami and crocodiles are also found in the water bodies of the country. Mozambique has also organized some Parks for the protection of these animals.

Almost 17,000,000 people reside in the Republic of Mozambique. The tribes called Khoi and San were the first inhabitants of the country in the prehistoric era. The majority of the population is ruled by nine ethnic groups. The Makua-Lomwe from he northern region of the country is the largest among them. The other ethnic groups include Makonde, Yao and some tribes from the southern region such as Tsonga, Chopi, Karanga, Shona, and Nguni. Though Portuguese is the official language, Bantu, Nyanja, Tsonga and Swahili are also widely spoken.

Art, Culture And Music Of Mozambique

The economy of Mozambique is largely based on its agriculture and also on its export trade. The fast growing industries of this country are food and beverages industry, aluminum and petroleum industry, cement industry, chemicals, textile industry, glass, asbestos and tobacco industry etc. The primary agricultural products are sugarcane, cotton, cashew nuts, tea, cassava, coconuts, sisal, corn, citrus fruits, sunflowers, potatoes etc. The materials that are exported to the other foreign countries primarily are aluminum, cotton, cashews, sugar, prawns, timber, citrus and so on. The nations that take part in this export trade are Belgium, Italy, South Africa, Spain and Germany.