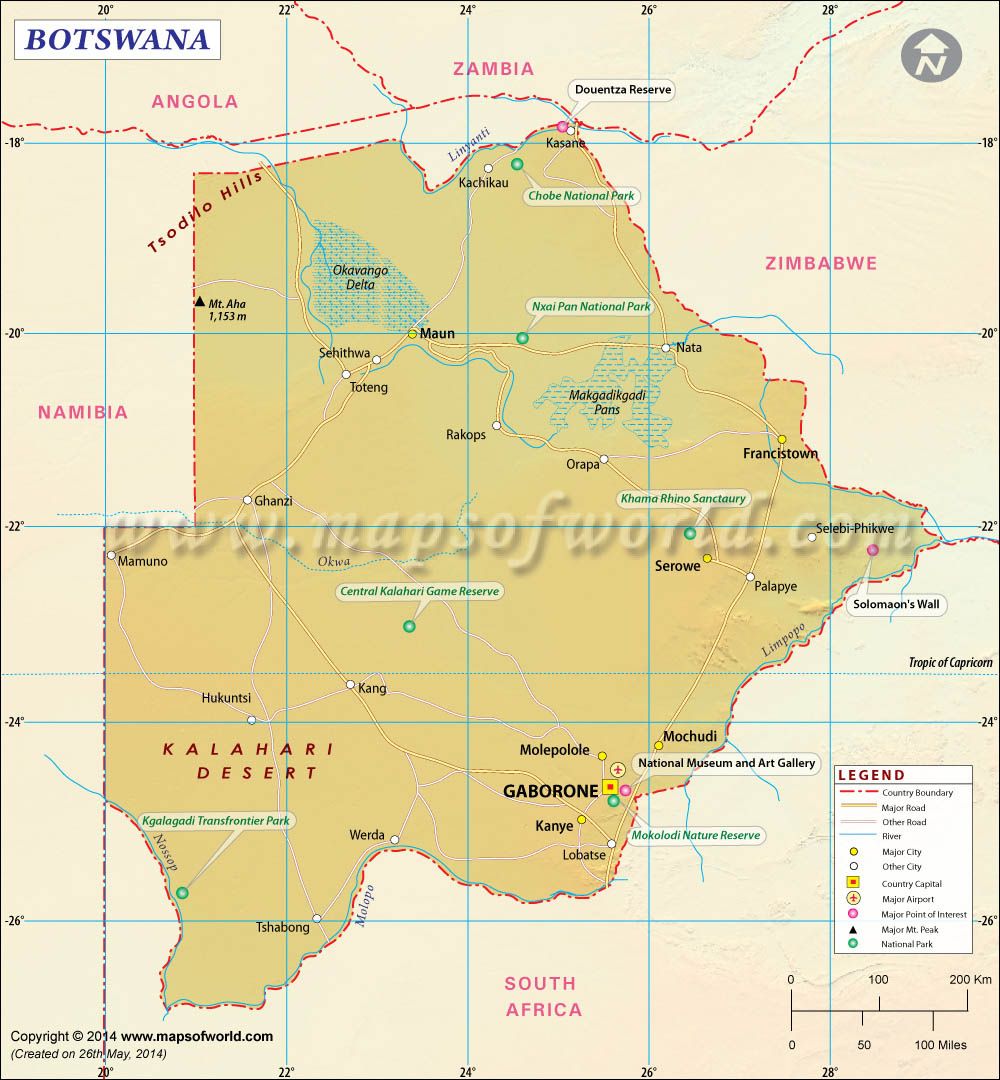 Explore map of Botswana, It is a landlocked country located in Southern Africa, Botswana adopted its name after becoming independent, on 30th September 1966.

The earliest inhabitants of the region that is now Botswana were the San bushmen. They were followed by the ethnic group Tswana, who came into the area from South Africa during the early 1800’s Zulu War. Before the Europeans came, the Tswana lived as farmers and herders, and were governed by tribal rule.

Later in the 19th century, hostilities and conflicts occurred between the Tswana and the Boer settlers who came to the region from Transvaal. Upon requests by the Tswana for assistance, the region became a British protectorate in 1885. The original area of Botswana was split between the North, which came under the direct administration of Britain; and the South, which became a territory of the Cape Colony, and now consists of a South African province.

In 1964, Britain started to accept proposals for a democratic and self-governed Botswana. The first general elections were held in 1965, and independence was achieved in September of 1966. Scretse Khama, a prominent leader in the independence movement, became the first president of Botswana. He was re-elected twice to the presidency. He died on July 13, 1980, due to pancreatic cancer and was succeeded by Quett Masire, who was the vice president of the country.

Botswana is a landlocked country in Central South Africa. Its borders include South Africa to its south, Namibia to its west, Zambia to its north, and Zimbabwe to the northeast.

Botswana is a parliamentary representative democratic republic with the President holding the highest position of government. He is head of state, head of government, and head of a multi-party system. Since its independence in 1966, Botswana’s polities have been dominated by one single party, which is the Botswana Democratic Party or BDP. There are 2 other major parties, as well as several smaller ones.

Botswana is world-famous for its incredible safaris. A premiere safari destination, Botswana has a number of national parks and game reserves that offer unique experiences for the traveler. Camp sites for the budget traveler as well as high-end and luxury safari resorts are found all over the country.

The Central Kalahari Game Reserve is the largest and most remote game reserve in the entire region of Southern Africa. It is the 2nd largest wildlife reserve in the world, and is the most famous safari destination in the country.

The Mokolo di Nature Reserve is found 10km from Gaborone and is a private not-for-profit nature reserve. It is home to a large number of indigenous African animals, which are mostly rare and vulnerable to threat and extinction. Among the animals that live in this reserve are birds, reptiles, and a number of mammals.

Chobe National Park is home to 4 different ecosystems. The Savuti marsh, found in this national park, is home to the highest concentrations of African wildlife in the continent. The national park is also home to the largest number of elephants – over 100,000 of them live in the area. Herds of zebras, giraffe, and buffalo are also the main sights in this Park.

The Okavango Delta runs through the middle of the Kalahari Desert. It creates an inland water system during the cool seasons of May to October, and offers spectacular sightings of rare birds and mammals. Sightseeing in this reserve is best done on board a canoe.

The Tsodilo Hills is a UNESCO Heritage Site and considered to be sacred by the San bushmen. Here, tourists can find over 400 sites of thousands and thousands of ancient San rock paintings that depict dances, animals, and hunting scenes from tens of thousands of years ago.

There are about 7 government-run universities in Botswana, with 3 of them situated in the city of Gaborone. Private universities are also available throughout the country.

Botswana’s government values education, and desires to create other sources of national income aside from its diamond mining industry. Because of this, the government spends 21% of its annual expenses on the country’s education system.