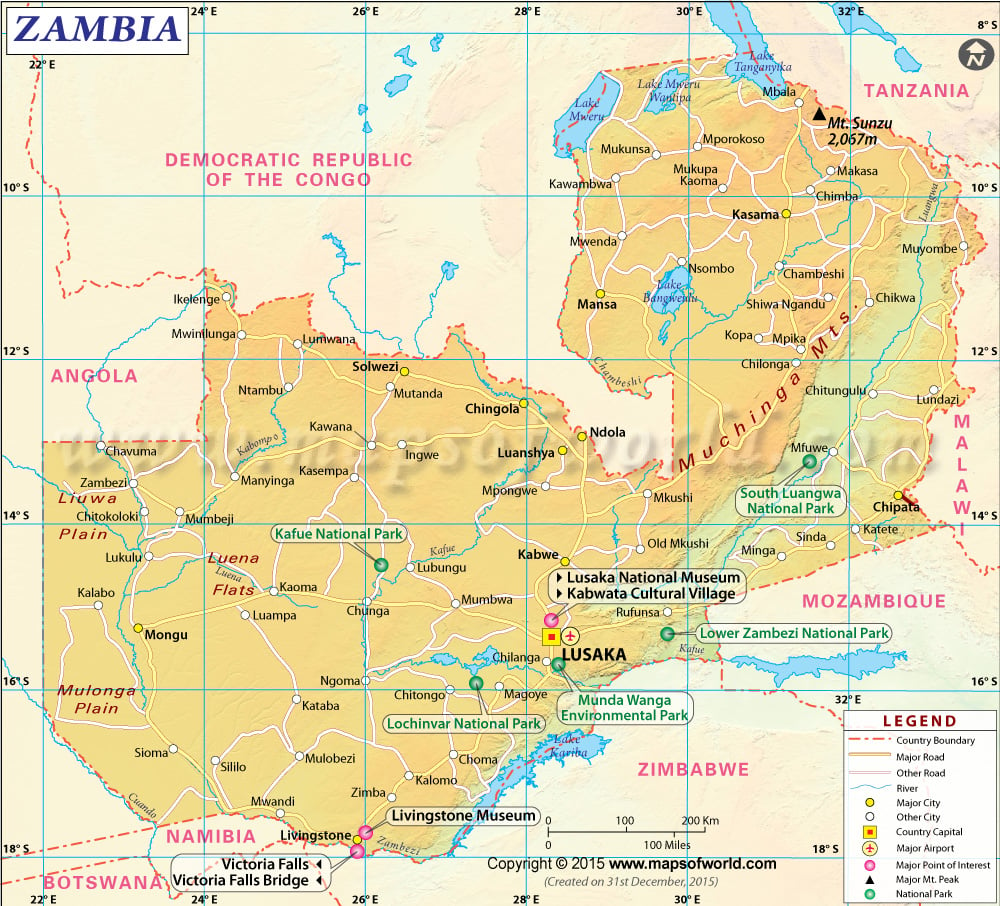 Zambia is a landlocked country in Africa. It’s the 39th largest country in the world. The country lies between latitudes 8° and 18°S, and longitudes 22° and 34°E.

Zambia was relatively untouched by Europeans for many centuries. The oldest historical information of the people in the region was that of the Khoisan people, who were colonized by the Bantu expansion during the 13th century. Its modern history began in the 18th century when it became a protectorate of the British empire. It was during these years that the region was penetrated by Western explorers, traders, and missionaries.

In 1855, British David Livingstone became the first ever European to see the grand waterfalls on the Zambezi River, naming it Victoria Falls in honor of Queen Victoria.

In 1888, Cecil Rhodes, obtained mineral rights concession from local chiefs of the region. In the same year, the North and South Rhodesia were declared as spheres of influence of Britain, which are now respectively known as Zambia and Zimbabwe. Copper, which became the most important part of the economy, was discovered in 1895 through the efforts of American Frederick Burnham.

In 1923, South Rhodesia was given self-governance, whereas North Rhodesia stayed under the protectorate of the British. North Rhodesia joined with Nyasaland, which is present-day Malawi, to create the Federation of Rhodesia and Nyasaland in 1953. The Federation was dissolved in 1963 and North Rhodesia became in independent country and renamed to Republic of Zambia on October 24, 1964.

Geography Zambia is a landlocked country found in South Africa. The borders are Congo to the north, Botswana, Mozambique, Zimbabwe and Namibia to the south, Angola to the west, Malawi to the east, and Tanzania to the northeast.

Zambia is considered to have a tropical climate, and consists of high plateaus, mountains, and hills. For the most part of the country, the surface tends to be flat, with undisturbed erosion. This characteristic of its landscape makes it abundant with underlying crystalline rocks, which contain the bulk of Zambia’s mineral wealth.

Zambia is a presidential representative democratic republic, with the president as head of state and head of government. The government exercises Executive Power, while it also practices Legislative Power together with the Parliament. There is a total of 10 provinces in the country, each of which are administered by an appointed deputy minister.

Zambia is one of the diamonds in the rough of South Africa. It’s one of the best countries for wildlife safari, and it’s the home of the largest waterfalls in the world.

Victoria Falls is a must-see in Zambia. Located in the southern province near the town of Livingstone, it is one of the 7 wonders of the natural world. It’s the biggest tourist attraction in Zambia, but Zimbabwe also shares the attraction with the country. Around the waterfalls are 2 national parks that offer interesting mixes of flora and fauna for tourists to explore in guided tours.

The South Luangwa National Park is the famous African walking safari. Among the most popular wildlife found in this park are giraffes, elephants, crocodiles, and the hippopotamus.

The Lower Zambezi River, also found in the southern part of the country is the best place for a weekend getaway. A basin located near the capital of Lusaka, locals and tourists spend their weekends hunting, fishing, boating, and many other bush camp excursions.

For the best place to buy local, the Saturday Dutch Market in Lusaka is a vibrant open-air market. Every last Saturday of the month, vendors sell all kinds of items on the premises of the Dutch Reformed Church. Tourists can find all kinds of arts and crafts items, copper plates, soap stones, local produce, traditional handicrafts, and even ethnic and traditional cuisine.

There are both government and private schools all around Zambia. Education in public schools are free until the year 7. Private schools are mainly a result of Christian mission efforts during the 19th to 20th centuries.