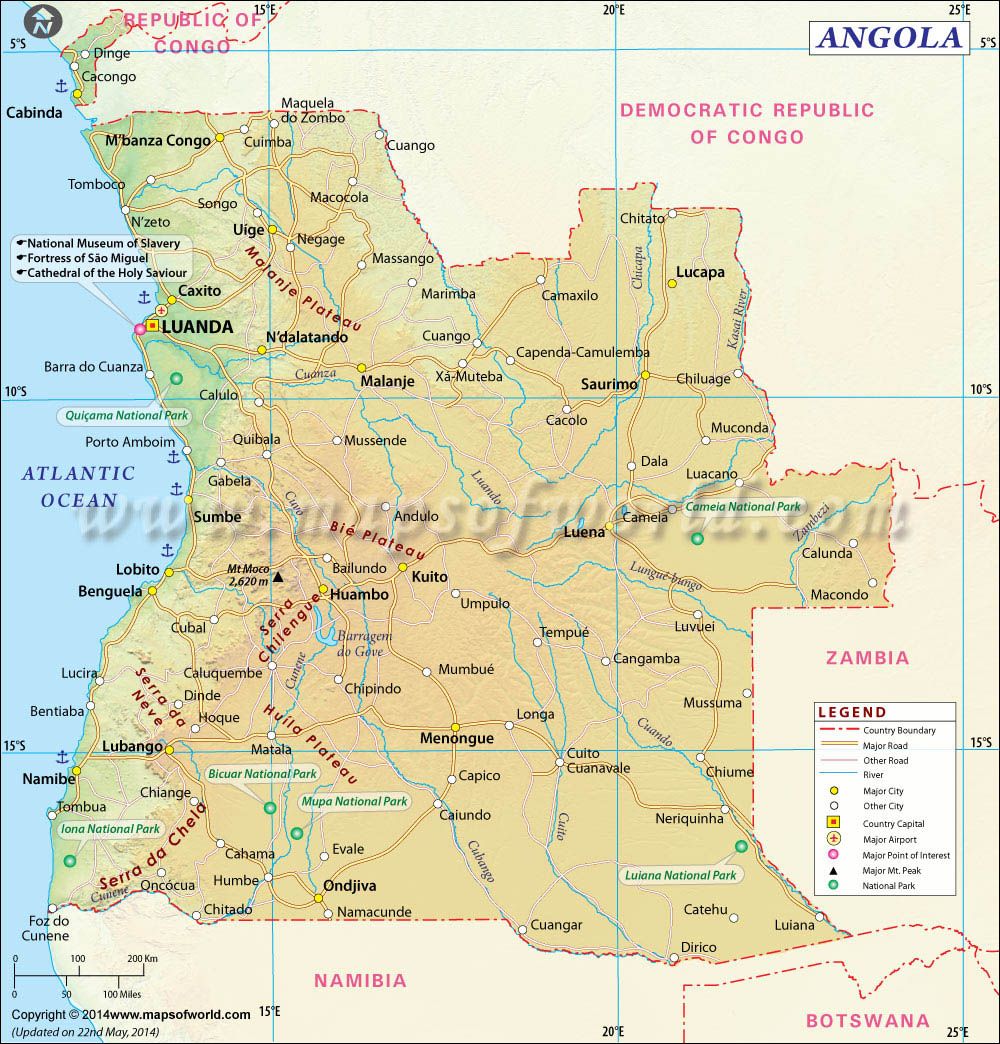 Explore this Angola Map to know everything you want to know. Learn about the location of the country. Check out its geography, major cities, facts, flag, capital, etc.

The Republic of Angola has a long history of human inhabitation, from the Khoisan people to the Bantu, with various empires throughout history. Significant kingdoms of historical Angola included the Kingdom of the Kongo and the 15th-century Mbunda.

Portuguese explorers arrived in Angola at the end of the 15th century, founding the colony of Luanda in 1575. The name Angola was given by the Portuguese and derived from the local kings. Angola was a substantial settlement for European trade, including the slave trade. Check these Angola Facts to learn more about Angola.

Angola adopted its national flag on November 11, 1975, following its independence from Portugal. The Angolan flag is divided into two halves – red at the top and the bottom half black. The flag’s middle is a yellow emblem comprising a partial cog wheel, a machete, and a star.

Angola is situated in the south-central part of Africa. It is located around 12°30’S Latitude and 18°30’E longitude.

Except for a period of occupation by the Dutch, Angola remained under Portuguese rule as an overseas province until the outbreak of a revolution, in which the people of Angola fought for independence, succeeding in 1975. After gaining independence, Angola suffered internal conflict and fought a civil war, lasting 27 years and ending in 2002. Today, Angola continues to work towards strengthening its economy and maintaining stability, though it remains one of the poorest nations in the world, despite oil reserves.

Angola is located in southern Africa, along the west coast. It features 1600 kilometers (994 miles) of coastline, with beautiful tropical beaches. Several rivers traverse Angola, including the Kwanza (or Cuanza) River, its tributaries, the Lucala and Cutato Rivers, and the Cunene River. Check this Angola Physical Map showing all the physical features of the country.

Several rivers traverse Angola, including the Kwanza (or Cuanza) River, its tributaries, the Lucala and Cutato Rivers, and the Cunene River. Check this Angola Rivers Map for learning more about rivers in Angola.

Points of Interest in Angola

Another major attraction in Angola is the Palacio de Ferro in Luanda’s capital. This palace was designed by Gustave Eiffel, who also designed the Eiffel Tower in Paris. The capital has several museums, a few fortresses, churches, and the massive obelisk, which is the mausoleum of the first president of Angola, Augustinho Neto.

The most common way to enter Angola is via airplane to Luanda’s Quatro de Fevereiro Airport. No trains, buses, or official ferries enter Angola from other countries, though boats can be chartered. A railway system within Angola does exist with three separate lines. There are roads in Angola, so driving is possible, but the road conditions are not excellent, and there is a high potential for obstacles such as livestock.