Lusaka is the capital of Zambia. Founded in 1905 by European settlers, it was discovered at a village site. It was named after a village headman Lusaaka. The city replaced… 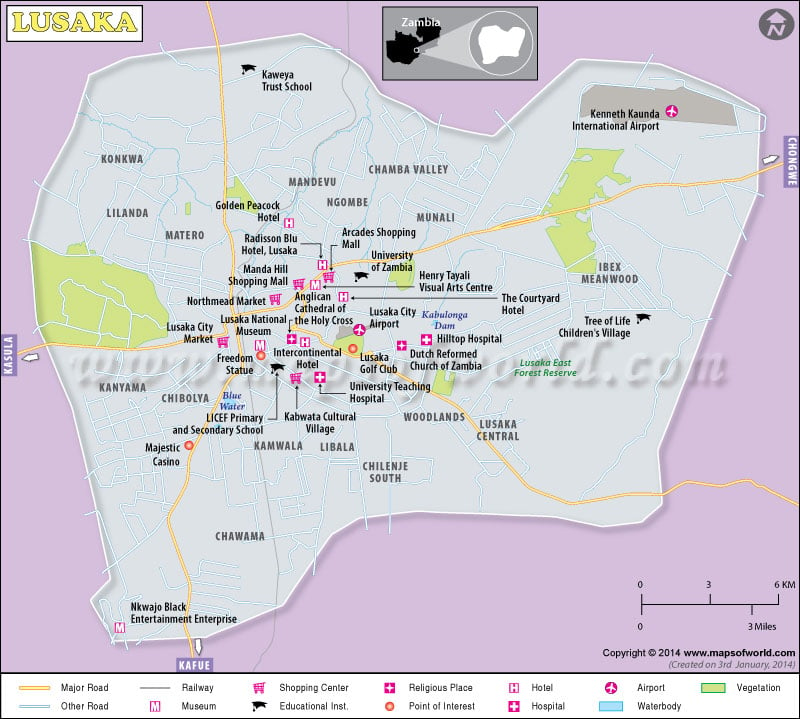 Lusaka is the capital of Zambia. Founded in 1905 by European settlers, it was discovered at a village site. It was named after a village headman Lusaaka. The city replaced Livingstone as the capital of the British colony Northern Rhodesia in 1935. It was the center of the civil disobedience movement that resulted in the formation of Zambia. Lusaka became the capital of independent Zambia in 1964.

Area & Location : Lies around Cairo road, Lusaka is situated in south central Zambia. Located at 15º25′ Latitude South and 28º17′ Longitude East, the city sits on a plateau at 1280m in altitude. The city has a population of 1,084,703, making it the largest city in Zambia.

Tourist Attractions : The city has many museums and gardens that gain the attention of the tourists.

Transportation : Lusaka International Airport that operates domestic as well as international flights, act as the gateway to the city. Railway network connects the city with other regions. Buses and cars are the forms of public transport in the city.

Hotels : The Lusaka hotels provide all modern amenities to its guests that persuade them to choose these hotels during their further visit. Besides outstanding services, these hotels also provide delicious food and comfortable accommodation. Some of such hotels are Taj Pamodzi Hotel, Cresta Golfview Hotel Ltd., Holiday Inn, Inter-Continental Hotels and Protea Hotel Lusaka Safari Lodge.

Places of Attraction : Olympia Park, Rhodes Park, Roma, Thorn Park and Woodlands are the gorgeous parks in the city give a fresh feeling to the minds of the visitors. Lusaka National Museum, the Political Museum, the Zintu Community Museum, the Freedom Statue, the Zambian National Assembly, the Agricultural Society Showgrounds, the Moore Pottery Factory, the Lusaka Playhouse theatre, the Cathedral of the Holy Cross, a centotaph, a golf club, the Lusaka Central Sports Club, the zoo and botanical gardens of the Munda Wanga Environmental Park are other major attractions in the city that mesmerizes both tourists and residents.