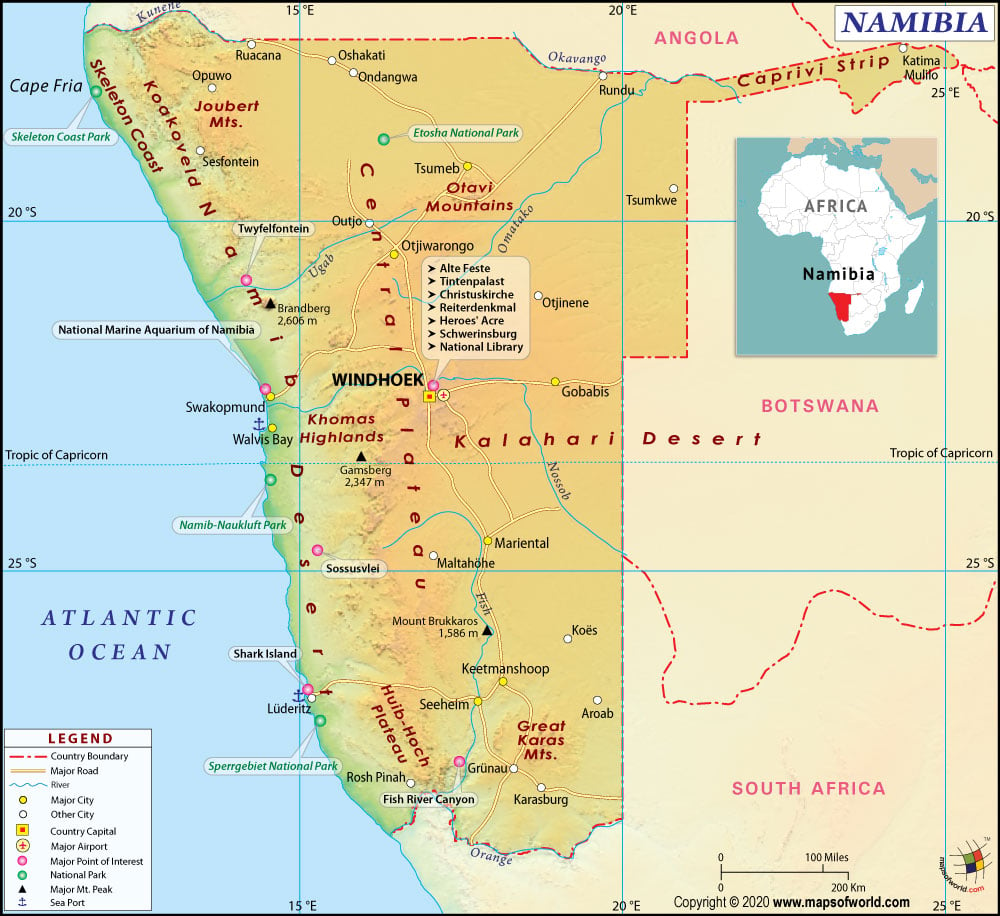 In its early history, Namibia was inhabited by the indigenous Bushmen, hunter-gatherer people moving across southern Africa, while its northern territories were inhabited by the Ovambo people, who were farming people. Around the 17th century, Namibia was populated by the Herero people who arrived from the east and drove out some of the indigenous population. The Oorlams, a Boer group, further displaced the indigenous Bushmen when they arrived in the 19th century. The Oorlams used advanced weaponry to conquer much of the region.

Europeans arrived in Namibia in 1485, beginning with the Portuguese, who stopped on the coast on their journeys around the Cape of Good Hope. Missionaries from London traveled from the Cape Colony in the south to establish a church in Namibia in 1805. During the European Scramble for Africa other European colonists took an interest in Namibia, including a British settlement, and a German purchase of land, claiming German South West Africa in 1884. The colony was expanded over the next few decades, becoming a protectorate. German colonization was not without resistance, however. The native people rebelled, but were subdued. Diamonds were soon discovered in Namibia, and by 1910, thousands of Germans had immigrated to the colony.

Uprisings of the native people against the colonial power resulted in an increase in German forces in the colony, and the successive events became known as the Herero and Namaqua Genocide, with the Germans killing off about half of the native populations.

British South Africa took control of German South West Africa during World War I, eventually trying to absorb the territory into South Africa. The UN prevented this from happening, and the people of Namibia began to fight for independence, sparking the Namibian War of Independence. South Africa continued its presence in Namibia, though there was pressure from the UN to turn over power. The country finally transitioned into a sovereign nation in 1990.

Namibia shares borders with Angola, Zambia, Botswana, and South Africa, and is just across the Zambezi river from Zimbabwe.

Namibia is primarily situated in desert regions, with the Namib Desert along the coast and the Kalahari Desert inland. The Namib Desert is a gravelly plain, with tall sand dunes, and includes the regions of the Skeleton Coast and Kaokoveld. The Kalahari Desert also features areas like the Succulent Karoo with holds a third of the succulents worldwide, many of which are endemic to the region. The central corridor of Namibia features the Central Plateau, where Namibia’s highest point stands 2,606 meters (8,550 feet) above sea level at Brandberg Mountain in Konigstein.

The flat and sandy Bushveld in northeastern Namibia is a wetter region, featuring woodlands and grassy plains. Likewise, the Great Escarpment, Namibia’s other main geographic zone is wetter than the desert regions along the outer edges of the country, and is also somewhat mountainous. The Orange river flows past Namibia, forming its border with South Africa in the Karas region, while the Zambezi river forms part of its border with Zambia and Zimbabwe. The Ekuma, Oshigambo, and Omurambo Ovambo rivers flow into the Etosha National Park.

Namibia features several scenic destinations, including its famous Namib and Kalahari Deserts and national parks, like Etosha National Park, which is home to a large nature reserve with big game like zebras, giraffes, rhinos, lions, and elephants. Namibia is home to the world’s second largest canyon, at Fish River Canyon Park.

The main airport of Namibia is Hosea Kutako International, outside of Windhoek. The airport offers service to many destinations in Africa and a few in Europe, including to Germany. There are several international highways leading into Namibia, so car and bus are good potential methods of reaching the country and getting around. Roads in Namibia are often paved and well maintained, particularly in the well traveled regions of the country. Minibuses or shared taxis are a good way of getting around the country, as are the railways, with service between major cities including Windhoek, Walvis Bay, and Tsumeb.