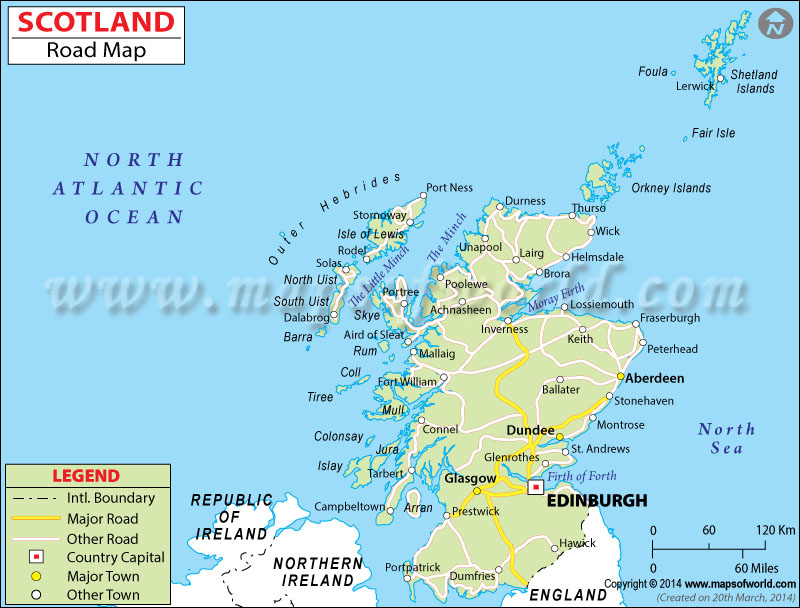 Scotland by road is an experience in itself. If you are driving into Scotland from England take along the Scotland Road Map.

If you drive through Gretna Green on the A74(M) and head towards Glasgow, you would be going past Lockerbie, Beattock, Moffat and Douglas before reaching Glasgow.

If you are on a holiday, then you might want to drive westwards from Gretna Green on the A75 to head towards the coastal road along the Firth of Clyde and move northwards to get to Glasgow.

This drive is best enjoyed driving at a leisurely pace. You will be going past Dumfries, Shawhead, Springholm, Castle Douglas, Ringford, Twynholm, Gatehouse of Fleet, Creetown, Newton Stewart, Glenleuce and reaching Stranraer before moving northwards on A77 along the shores of Loch Ryan towards Cairnryan.

As one drives further north of Cairnryan on A77, the road curves north east, away from the shores of Loch Ryan, towards Auchencrosh before catching up with the coastal sights at Ballantrae. From here, it’s a long beautiful drive on the A77 moving along the long coast that will have you go past Turnberry, Maybole, Alloway, to reach the Y-fork at Monkton.

If you would like to move towards Glasgow, then take the right fork on A77 heading towards Fenwick, after which the road becomes M77. Driving further on M77 you will go past Dams to Darnley Country Park, Darnley, Pollok Country Park and finally arriving at Glasgow.

Driving from Glasgow to Edinburgh

The road distance between the two cities is 51.4 miles when driving via M80 and M9 and takes around 1 hour and sixteen minutes. If one takes the M8, then the distance is 46.9 miles and the distance can be covered in 1 hour and 12 minutes.

Taking the M80 from Glasgow, the road goes past Mollinsburn, Cumbernauld, Castlecary, Banknock and Bonnybridge. From here, take the M876 and then onto M9 to go past Polmont. The Edinburgh Airport will fall on the right side as you continue on M9 towards Newsbridge.

Leaving Glasgow on M8, drive past leaving Bargedelle on the right and then head further towards Whitburn. Continue on to Blackburn before reaching The City of Edinburgh Bypass – Hermiston Galt crossing. Stay on Calder Road that will take you past Edinburgh International Conference Centre as you move towards your destination within Edinburgh.

Driving from Edinburgh to Aberdeen

The total distance is 126 miles and is covered in 2 hour and 40 mins. Exiting Edinburgh via Queensferry Road onto M90. You will drive past Kinross and Bridge of Earn and Perth after which you take the A90. You will go past St Madoes, Glencarse, Inchture, Tealing, Stracathro, Laurencekirk, New Mains of Ury, Cammachmore before entering Aberdeen.

This is a longer route with the distance of 156 miles being covered in 3 hour and 11 minutes. Exit Edinburgh via M9 driving past Ingliston, Linithgow, Stirling before taking A9 to reach Perth. From Perth, stay on A90 and follow the same route as mentioned above to reach Aberdeen.