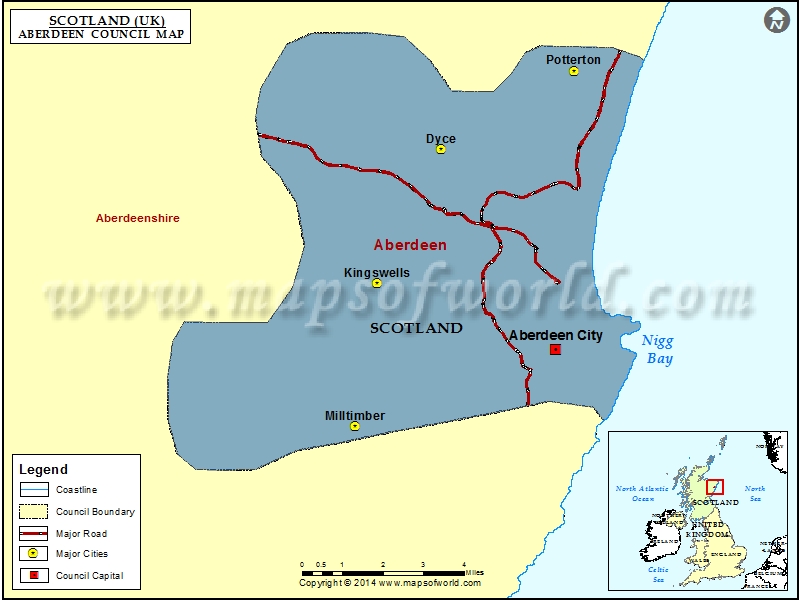 Created in 1996 under the Local Government, Aberdeen City Council of Scotland is controlled and operated by Scottish Labour, Scottish Conservative, and Independent Councilors. In the election of May 2012, the Labor party gained ascendancy over Liberal Democrat and Conservative coalition that controlled the council between 2003 and 2007. But after the 2012 elections, the council came under the control of the Labour-Conservative-Independent coalition with 23 seats.

Aberdeen Council encompasses the North Sea to the east and a portion of the Grampian Mountains to the west, and coastal lowlands to the east and north. From adventure to historic sites, Aberdeen Council offers everything a traveler may need. Boasting astounding architecture and landscape, Aberdeen is known for its majestic castles, including the amazing Castle Trail – a selection of 17 remarkable castles, such as Balmoral Castle, Braemar Castle, Dunnottar Castle, etc., and stunning museums, such as the Aberdeen Maritime Museum, the Gordon Highlanders Museum, and much more.

One of the most populated cities of Scotland, Aberdeen is well known for its Aberdeen International Youth Festival and sees participation from all around the world. If one is visiting the council during this time, one will be taken in by its buzz and energy.

Proud of its maritime history, the city is a cultural hotspot. Known for its energy, this lovely city is blessed with lush forests, a striking coastline, and magnificent mountains. Charming and quaint, the city has much to offer for food lovers, including a delightful array of coastal offerings. Architectural splendor, delicious food, and a rich historical past, there is little else one will need when on a holiday to this small town.

Map of Perthshire and Kinross Council

Map of Dumfries and Galloway Council

Map of Dumfries and Galloway Council