Explore the map of Lisbon, the largest city and capital of Portugal to locate shopping centers, airports, hotels, etc. 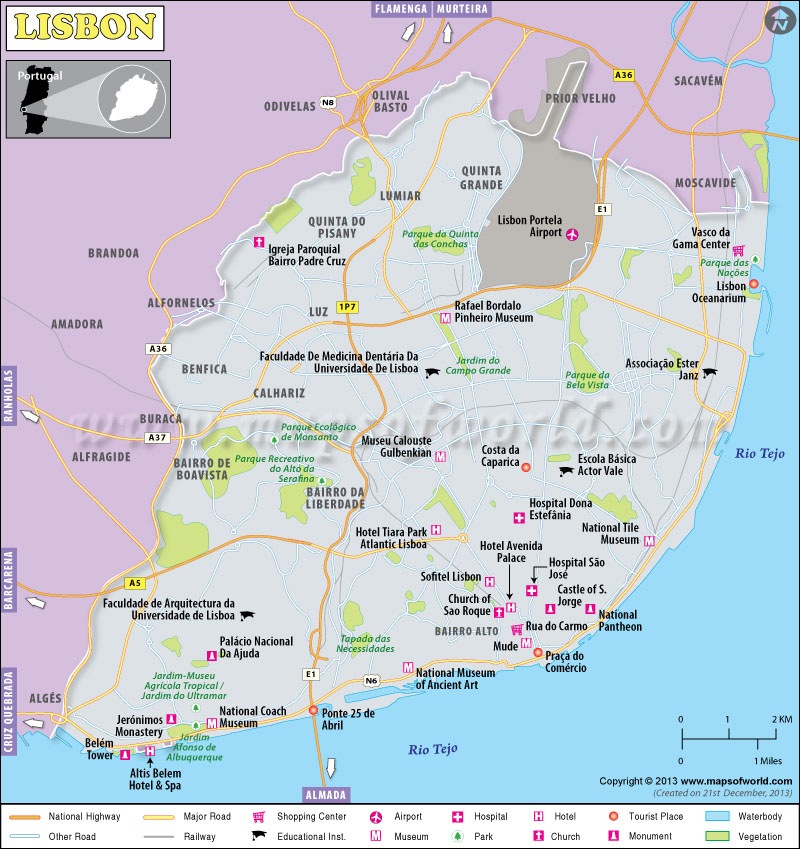 Lisbon is the largest city and the capital of Portugal. It has an approximate population of 547,631 and is sprawled over an area of 84.8 square kilometers. Lisbon is considered to be the second oldest capital of Europe, after Athens. Formerly, it was home to some great explorers including Prince Henry and Vasco da Gama. The city is also known as a global city chiefly due to its significance in commerce, finance, entertainment, media, arts, tourism, education, and international trade.

Located on the right-hand side of the River Tagus, Lisbon is centrally located in Portugal. It is located in the southwestern region of Europe and is bordered by the Atlantic Ocean on the west and south and Spain on the east and north. It lies approximately 400 km from Spain’s northern border and 300 km from the southern region, the Algarve.

Flights are the most convenient way to reach Lisbon, though you can also avail of overnight trains from Madrid. However, by train, you may take as long as 10 hours to reach the city. Most of the prominent European airlines fly to this city including Lufthansa, Air France, and British Airways. The national Portuguese airline connects the city to other European cities and to the United States. You can avail of regular flights from New York (Newark Liberty International Airport) as well as from Miami. Lisbon Airport is approximately 9 km from the city center. Hence, you can avail of the metro, taxi, or bus from the airport to reach your desired destination in the city.

Lisbon is home to various fairs and festivals including :

Lisbon has the perfect combination of heritage, culture, and nightlife. The chief points of interest here include:

For your vacation to end in perfection, you should try out some of the best stay options in Lisbon. If you are not budget constrained, then hotels like Olissippo Lapa Palace, Hotel Avenida Palace, Four Seasons Hotel Ritz Lisboa, Altis Belem, Pestana Palace Hotel & National Monument, and Tiara Park Atlantic Lisboa work well. On the other hand, if you don’t want to spend too much on a lavish stay but then at the same time are eyeing some decent options, then hotels like Pensao Residencial Portuense, Hotel Ibis Lisboa Jose Malhoa, Pensao Praca da Figueira, and Pensao Londres seem most suitable.