Jordan's latitude and longitude is 31° 00' N and 36° 00' E . Below is the map of Jordan showing major towns, roads, airports with latitudes and longitudes plotted on it. 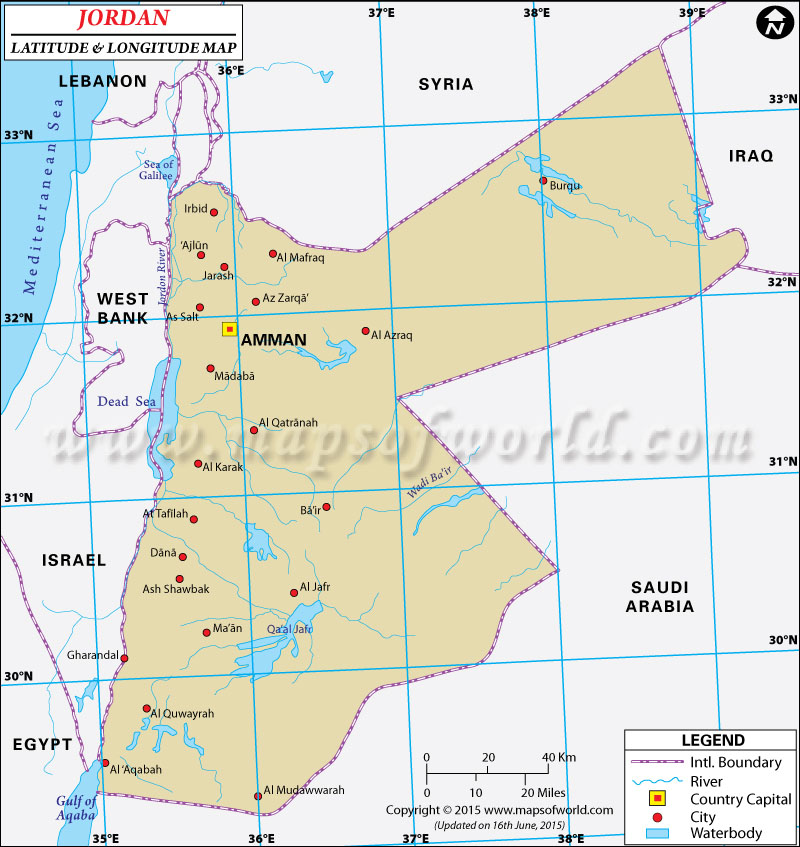 The Hashemite Kingdom of Jordan has its geographic coordinates in 31°00'N latitude and 36°00'E longitude .Jordan, in the local parlance is referred to as Al Mamlakah al Urduniyah al Hashimiyah or simply as Al Urdun. A Middle Eastern Arab nationality in West Asia, Jordan's latitude and longitude encompasses an area of 92,300 sq km.
The capital of Jordan is Amman with the latitude and longitude of 31°57'N and 35°56'E. Jordan has a population of approximately 6,053,193. The population profile has a majority of Arabs and the remaining are of Circassian and Armenian origin.

Jordan has a constitutional monarchy, in place since the 1920s. At the end of World War I, with the disintegration of the Ottoman Empire, two entities called the French Mandate Syria and the British Mandate Palestine came into being. The British gave administrative powers of Transjordan, the area east of the River Jordan to the Hashemite king, Abdullah I. The kind and his successors, King Hussein and King Abdullah II have steered Jordan into an era of liberal economic reform and prosperity.

Jordan's latitude and longitude and its desert location, ensures a climate that is mostly hot and dry throughout the year. However in West Jordan, there is a rainy season from November onwards. The native terrain is arid and dry desert land, with a plateau in the east. The Great Rift Valley is located between the East and West Banks of the River Jordan.