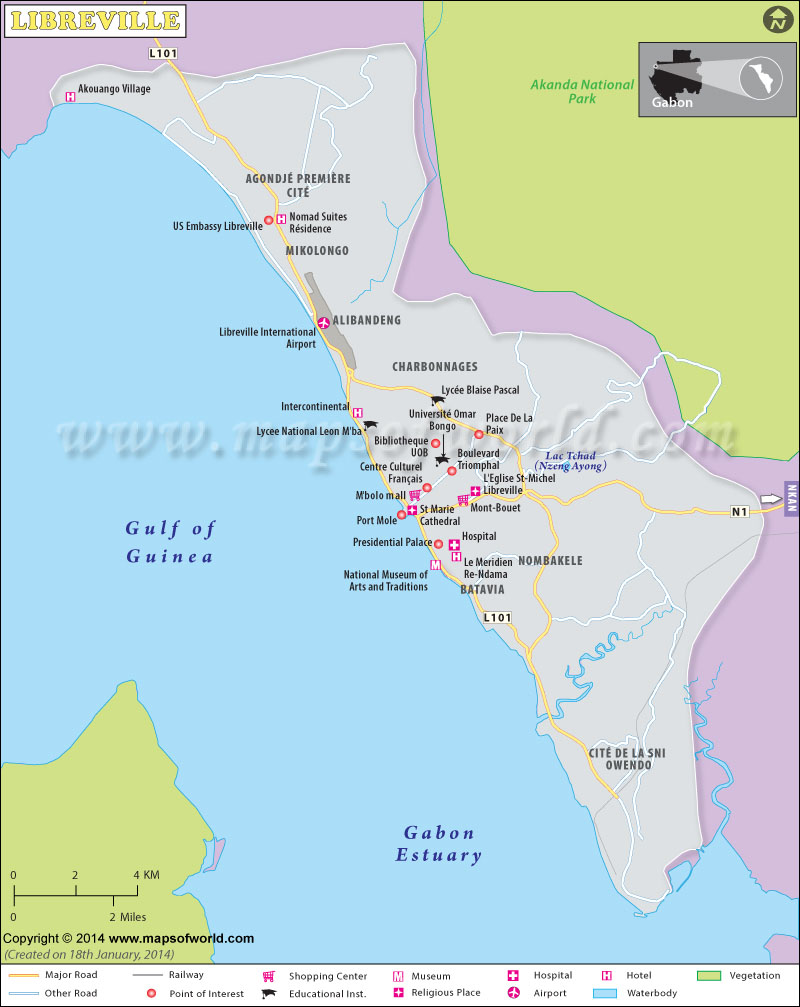 Libreville is the capital of Gabon. This beautiful country located on the west coast of Africa has become a unique destination of eco-tourism and 10% of the country is covered by national parks inhabited by diverse wildlife. The city lies on the Komo River near the Gulf of Guinea. The city was founded in 1848. The French started dominating the region in 1839. In 1848, the French navy captured a Brazilian ship sailing with slaves who were freed. These freed slaves set up the city of Libreville or Freetown. The city remained a minor administrative and trading outpost. In 1930, the Bank of West Africa opened its branch here and the city began to gain importance. In 1960, when Gabon won its freedom, Libreville was declared to be the capital. Since then, the city has experienced rapid growth.

Libreville is located on the north of the Gabon estuary. It is built on a number of hills which has formed a sheltered port. Part of the city is covered by a plateau. Located in the northwestern part of the country, the capital runs along the shores of the Atlantic.

The climate is warm and always sunny. The city receives intermittent rainfall and there are about 80 rainy days in a year. Humidity is often high. December and January are the warmest months. June and July are the driest months. The beaches enjoy the mild climate and are a favorite haunt of both the locals and the tourists.

Libreville is connected to some of the cities of Europe, Asia, and Africa by air. The Libreville International Airport (LBV) is located about 12 km from the city.

Trans-Gabon Railway being the only railway in Gabon running from Libreville east to Franceville has connected the capital to numerous towns in the country and revolutionized the economy.

Libreville is also connected to other African cities by road. Connections exist with Yaounde (Cameroon), Brazzaville (Congo) and Bata (Equatorial Guinea). Though freight ships may agree to take passengers, the sea route is not the common way to reach this capital city.

The best time to visit Libreville is during the dry periods of the year. There are two dry periods. One occurs in the months from May to September and the other in December and January. The rest of the year is too hot and humid for a comfortable visit.

The area around Libreville was inhabited by the Mpongwe tribe. In the seventeenth century, the French set up their outpost there. Since then, colonial influence gradually overrode the native culture of Libreville. Today, the city is almost completely modernized as it has become a commercial hub. French has even become the native language of the city. Only in a few isolated places, the symbols of the original tribal culture can still be seen. One such symbol is the traditional wooden masks which are still seen around the city. These masks are believed to possess occult powers and are used to communicate with the dead. The designs of these masks have inspired European masters like Picasso and Matisse.

The people of the city are very laid back and relaxed. Enjoy the sights rather than rushing from one place to another. The multicultural city offers a colorful experience to the tourists.

Since most of the country has been Christianized, the residents of Libreville celebrate the Christian festivals.

There are not a lot of places to see in Libreville. Instead, you should wander in the city or along the shopping district to enjoy its true flavor.

To enjoy your vacation to the fullest, you should enjoy a good stay as well. And Libreville promises to help you with some great stay choices. A number of mid-range hotels serve the tourists visiting Libreville. Some trusted options here are as follows: For a luxurious stay, you can count on options including but not limited to Nomad Suites Residence, Le Meridien Re-Ndama, and Radisson Blu Okume Palace. The 5-star hotels in Libreville that are worth mentioning include Intercontinental Libreville and Hotel Laico Okoume Palace Libreville Hotel. Last, but not least those running on a tight budget can enjoy their own set of privileges at budgetary options like Novotel Libreville Rapontchomb, and Dummy Libreville.