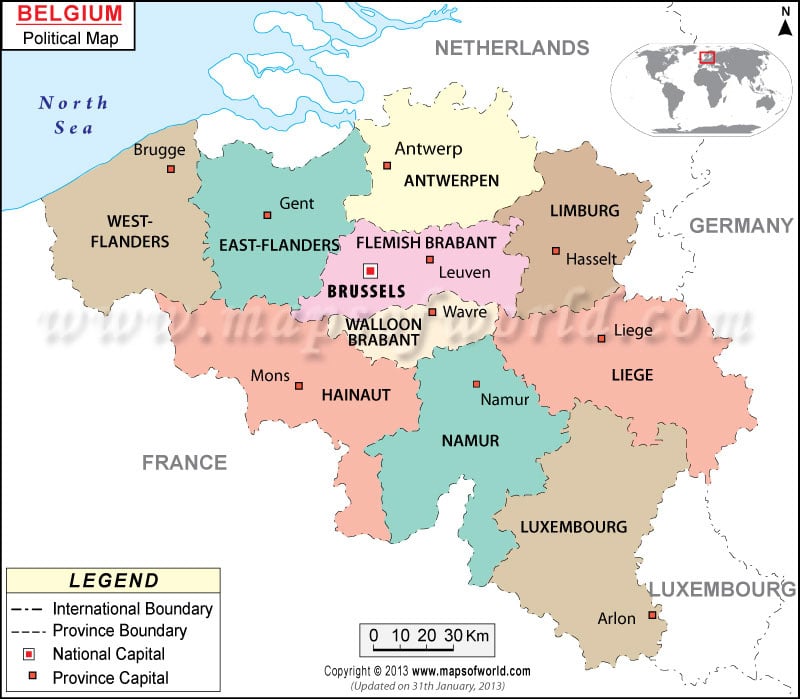 Belgium Political Map showcases administrative divisions of Belgium. The provinces or administrative divisions are shown with the capital city of each division in the map. The country capital Brussels is marked with a red dot within a square. The Belgium map also shows the neighboring countries of France, Luxembourg, Germany and Netherlands and the North Sea.

Location and Boundary of Belgium

Belgium political map clearly demarcates the provincial and international boundaries of the country. The international boundary is marked with a broken line with dots. The administrative boundaries are marked with a broken line. The geographical coordinates of Belgium are 50°50′ North latitude and 4°00′ East longitude. The total area of Belgium is 30,528 square kilometers, of which land area covered is 30,278 square kilometer while 250 square kilometer is covered by water bodies. The coastline of Belgium stretches over an area of 65 kilometers. The highest point is Signal de Botrange, which is 694 meters above the sea level and the lowest point is North Sea.

The country capital of Belgium is Brussels. The city lies at the geographical coordinates of 50° 49′ 60” North latitude and 4° 19′ 60” East longitude. Situated at an altitude of 252 meters, Brussels is also the administrative head of the European Union. It is also known as the Capital of Europe. The airports, which are located near Brussels, are:

The Belgium political map also points out the neighboring countries. They are Netherlands, Germany, France and Luxembourg. The North Sea lies to the west of Belgium.