In the map of Angola the international boundaries of the country are marked. South Atlantic Ocean, Nambia, Zambia and the Democratic Republic of the Congo border Angola. The capital of… 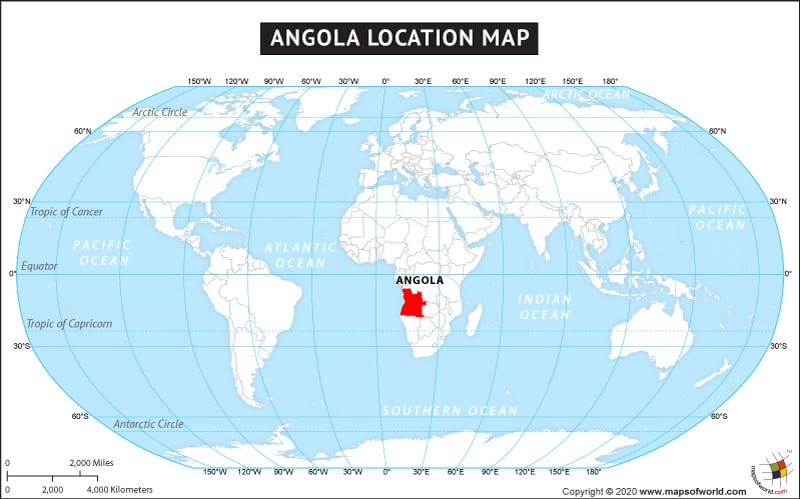 Description : Map showing the location of Angola on the World map.
0
FacebookTwitterEmail

In the map of Angola the international boundaries of the country are marked. South Atlantic Ocean, Nambia, Zambia and the Democratic Republic of the Congo border Angola.

The capital of the country is Luanda. Angola political map also points out the provinces along with their capitals. The country has 18 provinces.

Angola is situated in the south-central part of Africa. It is located around 12°30’S Latitude and 18°30’E longitude. Angola is spread over a total area of 1,246,700 Square Kilometers. The 18 provinces, in which the country has been divided for administration, are Bie, Namibe, Uige, Moxico, Zaire, Cunene, Huambo, Huila, Bengo, Lunda Sul, Malanje, Cabinda, Cuando, Cubango, Cuanza Norte, Cuanza Sul, Luanda, Benguela and Lunda Norte.

The province capitals, which are indicated in Angola map are mentioned below:

Luanda is the capital of the country. It is also the largest city of Angola. The city is located at 8°50’18”S Latitude and 13°14’4”E Longitudes. It is situated at an altitude of 22 feet above sea level on the coast of Angola by Atlantic Ocean. Feitaria, Salinas da Samba, Maianga, Muceques and Golfe are the cities located near the city. In the printable map of Angola, the position of the capital can be easily identified as it is marked with red color. Luanda is home to the Quarto de Fevereiro Airport.

The country of Angola is in the Africa continent and the latitude and longitude for the country are 08.50° N and 13.15° E.

The neighboring countries of Angola are: