Luanda is the capital of Angola. It is also the capital of Luanda Province. The Portuguese explorer Paulo Dias Novais founded the city in 1575. The ongoing military conflicts in… 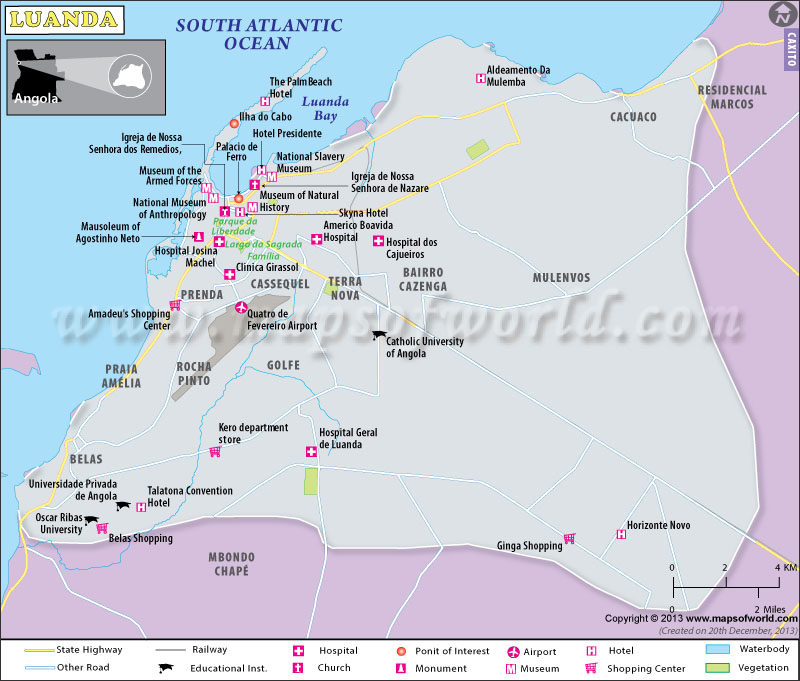 The Portuguese explorer Paulo Dias Novais founded the city in 1575. The ongoing military conflicts in Angola disrupted its growing economy. The city has been the administrative center of Angola since 1627. It was also the center of a large slave trade to Brazil in 1850. Luanda was a modern city during the time of Angolan independence in 1975. It is now the largest city in Angola and the seat of a Roman Catholic archbishop.

Located on the Atlantic Ocean, Luanda lies at 8º50’18” Latitude South and13º14’4″ Longitude East. The city has a population of 4.5 million. The majority of the population constitutes the African ethnic groups.

The city, which hardly has any tourist attractive places, is not considered as a tourist destination. But its museums draw in tourists to it.

Quatro de Fevereiro Airport, the largest airport in the country serves the city. It also has a broad railway network that links the cities. Buses and taxis are the forms of public transport in the city.

The city hotels provide all modern facilities to its guests in addition to the mouth-watering traditional dishes. The main hotels in the city are Alvalade hotel, Hotel Tropico and Le Presidente Meridien.

National Anthropology Museum, National Slavery Museum-that tells the history of slave trade, Cidade Alta-a religious site, llha do Massula -a beach, are the places where the tourists drop in on their visit to the city.