Namibia political map features the provinces along with their capitals, other important cities and the national capital of the country. The bordering countries of Namibia are Angola, Zambia, Zimbabwe, Botswana… 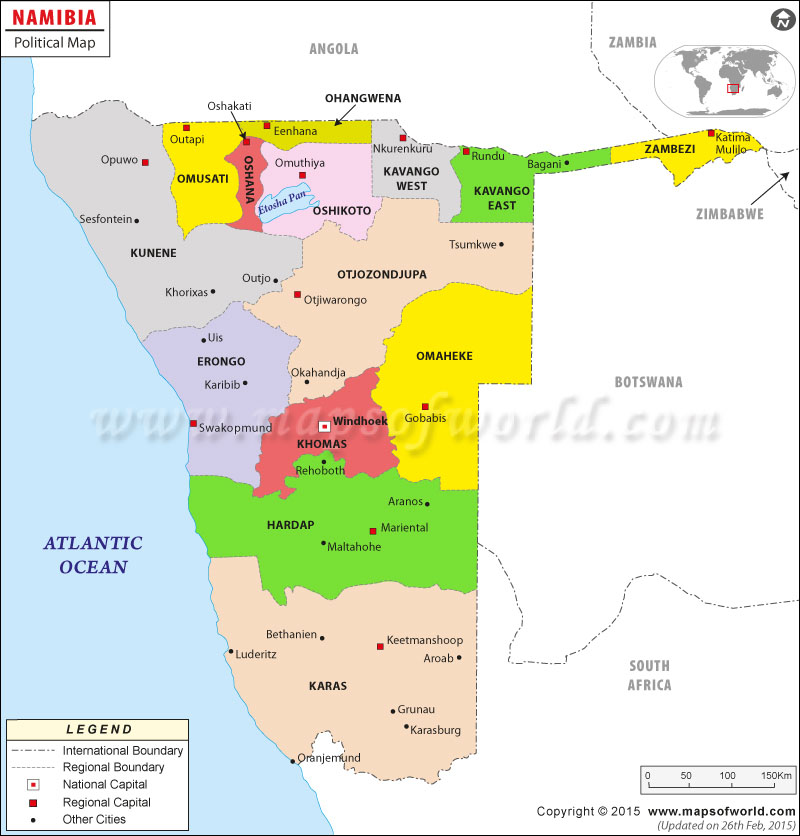 features the provinces along with their capitals, other important cities and the national capital of the country. The bordering countries of Namibia are Angola, Zambia, Zimbabwe, Botswana and South Africa. The national capital is indicated by a red dot and the province capitals feature in white squares. According to the map of Namibia Africa, the country borders with Atlantic Ocean in the west.

Geographical Features of Namibia Namibia lies in southern part of the African continent, which is clearly shown in the

. The geographical coordinates of the country are 22° South latitude and 17° East longitude. The total land area occupied by the country is 825,418 square kilometers. Namibia’s coastline extends up to 1,572 kilometers and is drawn with a blue line on the printable map of Namibia. The highest point of the country is at Konigstein situated at 2,606 meters above sea level and the lowest point is Atlantic Ocean. Namibia experiences desert type of climate with hot and scarce rainfall.

Country Capital The country capital of Namibia is Windhoek, situated at an altitude of 1721 meters above sea level. The geographical coordinates of the city are 22°34’12” South latitude and 17°5’1” East longitude. The city borders with Protea, Eros, Klein Windhoek, Suider Hof, Pionierspark and Windhoek Noord. The city of Windhoek is accessed by two airports, which serve as gateways to the city. They are Eros and Hosea Kutako International Airport.