The national flag of Afghanistan was adopted on January 4, 2004. The flag consists of three vertical stripes of black, red, and green from left to right. In the center is the national emblem of Afghanistan in white. Download a picture of the blank map of Afghanistan for kids to color. 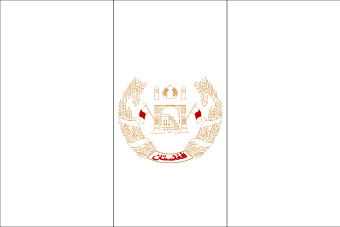 Download Picture of Blank Afghanistan Flag For Kids to Color

About Flag of Afghanistan

Also known as the King’s Flag, the national flag of Afghanistan is composed of three equal vertical stripes of black, red, and green. In the center is the white coat of arms of Afghanistan. The center emblem is the classical ensign of Afghanistan – a mosque with its mihrab facing toward Mecca. The mosque is circled by two sheaves of wheat. Over the emblem, the sacred line is written, “There is no God but Allah and Mohammad is His prophet, and Allah is great.” Below the insignia is written “Afghanistan 1298.”

The flag of Afghanistan incorporates the pan-Arab colors of black, green, red, and white, which represent the historical dynasties that once ruled the region.

History of the Flag of Afghanistan

Where is Afghanistan located?

Where is Afghanistan located?