Explore the map of Hanoi, it is the 2nd largest and the capital city of Vietnam. considered an important political center of Vietnam, it lies on the right bank of the Red River. 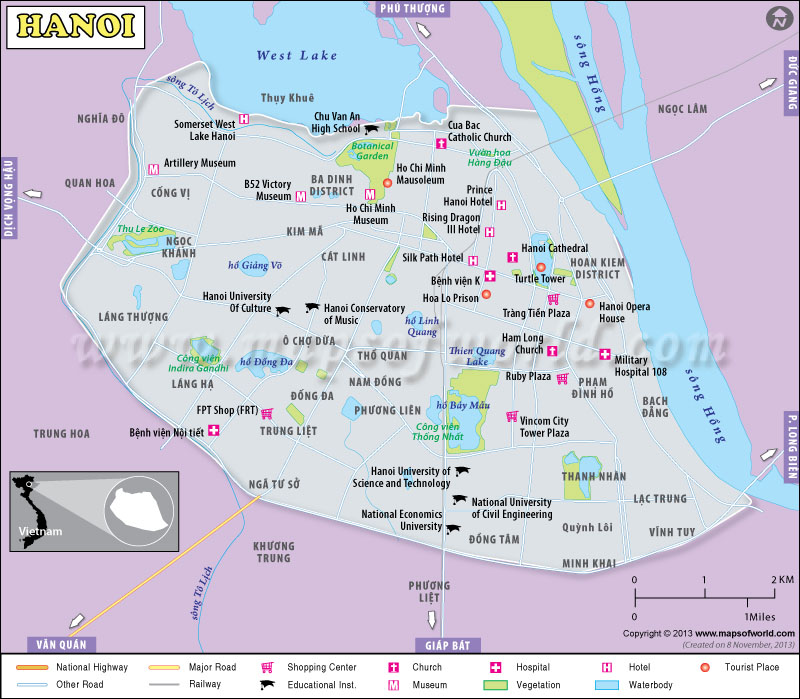 About the City of Hanoi

Hanoi is the capital and the second largest city in Vietnam. It covers an area of 3,344.7 sq km and had an approximate population of 65,00,000 in 2009. The city still retains its French colonial style.

The city is more than 1,000 years old and the earliest habitation was a citadel called Co Loa citadel, which was founded in about 200 BC. The region was annexed by the Han warriors in 197 BC and remained under Chinese domination for the next 1,000 years. In 1010, LyThai To – the first ruler of the Ly dynasty – shifted the capital here and renamed it Thang Long meaning soaring dragon. The name is still in use.

The city of Hanoi is located on the western bank of the Red River. It is located 85 km inland from the South China Sea. It lies in the delta region. Apart from the Red River, other rivers like Tich, Ca Lo, Duong, Cau, Nhue, Day, To Lich, and Kim Nguu also flow through the capital.

The city enjoys a humid subtropical climate. The summers are hot and humid while winters are dry and cold. Rainfall is concentrated between May and September.

You can travel to Hanoi in the following ways:

The best time to visit Hanoi is in the autumn (mid-September to the end of November) when the weather is at its best.

The vast variety of festivals celebrated in Hanoi is a reflection of its 1,000 years of history. Some of the major events are as follows:

The most interesting sights of Hanoi are as follows:

Hanoi offers a variety of accommodations, but it is better to avoid the Old Quarters where rates are often higher and foreigners may face harassment. The 5-star hotels include Intercontinental, Sofitel Plaza, and Sofitel Legend while 4-star hotels include Tirant, Melia, Sheraton, etc. The 3-star hotels include Zephyr, Golden Lotus, and Classic Street. Two-star and budget hotels are also available.