The national flag of Uganda was adopted on October 9, 1962. The flag is made up of six horizontal stripes of black, yellow, and red, with the national crane in the center on a white disc. 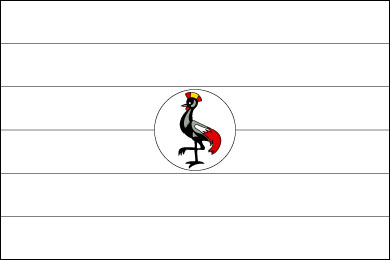 Download Picture of Blank Uganda Flag For Kids to Color

The flag of Uganda has six horizontal stripes of black, yellow, and red, which repeat from top to bottom.

On the center of the flag is a white disc, with the grey crowned crane, also referred to as the Balearic crested crane. The crane stands on one leg and faces toward the hoist side. This crane, known for its gentle nature, is a national symbol of Uganda. The grey crowned crane was used on the Ugandan military badges while it was a colony of Britain. The crowned crane is native to Uganda.

History of the Ugandan Flag

Designed by the national Minister of Justice, Grace Ibingira, the flag of Uganda was officially adopted on October 9, 1962, when Uganda gained independence from the United Kingdom. Prior to this flag, a provisional flag was used unofficially from March 1962 until the adoption of the current flag. The provisional flag had vertical stripes of green on the outer edges, blue in the center, and narrow yellow stripes on either side of the blue, separating the blue and the green. On the center of the blue middle stripe was the silhouette of the crane in yellow.