About City : Kampala is the capital of Uganda and has a population of over 2 million. It is the largest city in the country and is the political as well… 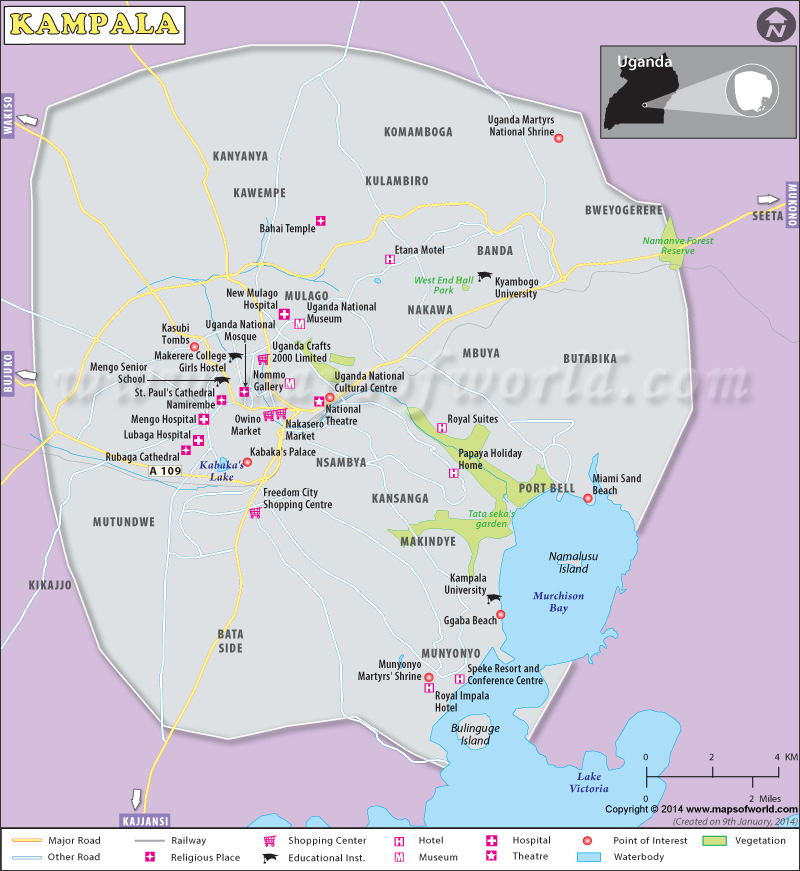 Kampala is the capital of Uganda and has a population of over 2 million. It is the largest city in the country and is the political as well as commercial center of the country. English, Luganda and Swahili are the most prevalent languages here.

Kampala sprawls over a series of hills, each housing one sector of the city and covers a total area of 189 sq km. It lies in the south of Uganda with Lake Victoria to its south. It is located to the north of Mengo which was the capital of the Buganda kingdom during the 19th century. The city has been divided into five boroughs, namely the divisions of Kampala Central, Kawempe, Lubaga, Makindye and Nakawa in order to supervise local planning.

The city is served by the Entebbe International Airport which lies on Lake Victoria’s shores at a distance of 41 km from the city center and is accessible by the Kampala-Entebbe Highway. Airlines like African Airways, British Airways, KLM, Emirates and Qatar Airways operate passenger flights from several cities like London, Brussels, Amsterdam, Juba and Istanbul. Taxis, hotel shuttles and minibuses to Kampala are easily available outside the airport.

Nairobi operates a biweekly train to and from the city which offers a very pristine and scenic journey. Kampala is accessible from cities of Kabale, Fort Portal, Jinja and Kasese by bus. A daily ferry service connects Kampala to the islands of Sesse.

Inside the city, there are three major means of transport, namely, motorcycles (locally known as boda-bodas), minibuses (called matatus) and taxis (also called special hires). Taxis both metered or otherwise, while expensive are comfortable and relatively safer than the other two. Although boda-bodas are very fast, they have been known to have mostly reckless drivers who operate the vehicle at dangerously high speeds. Minibuses, although frequent and cheap, are mostly very crowded and slow.

Kampala features a tropical rainforest climate and has two wet seasons, one from August to December and a shorter one from February to June. The city has a uniform temperature between 20 degree Celsius and 30 degree Celsius throughout the year. The best time to visit this city is from June to September when the weather is relatively drier as well as cooler.

Kampala celebrates several religious and cultural festivals throughout the year catering to its rich heritage.

Other festivals include the Independence Day, Easter and Christmas.

Points of Interest (Places to Visit) :
Following are some of the must see places of the city: