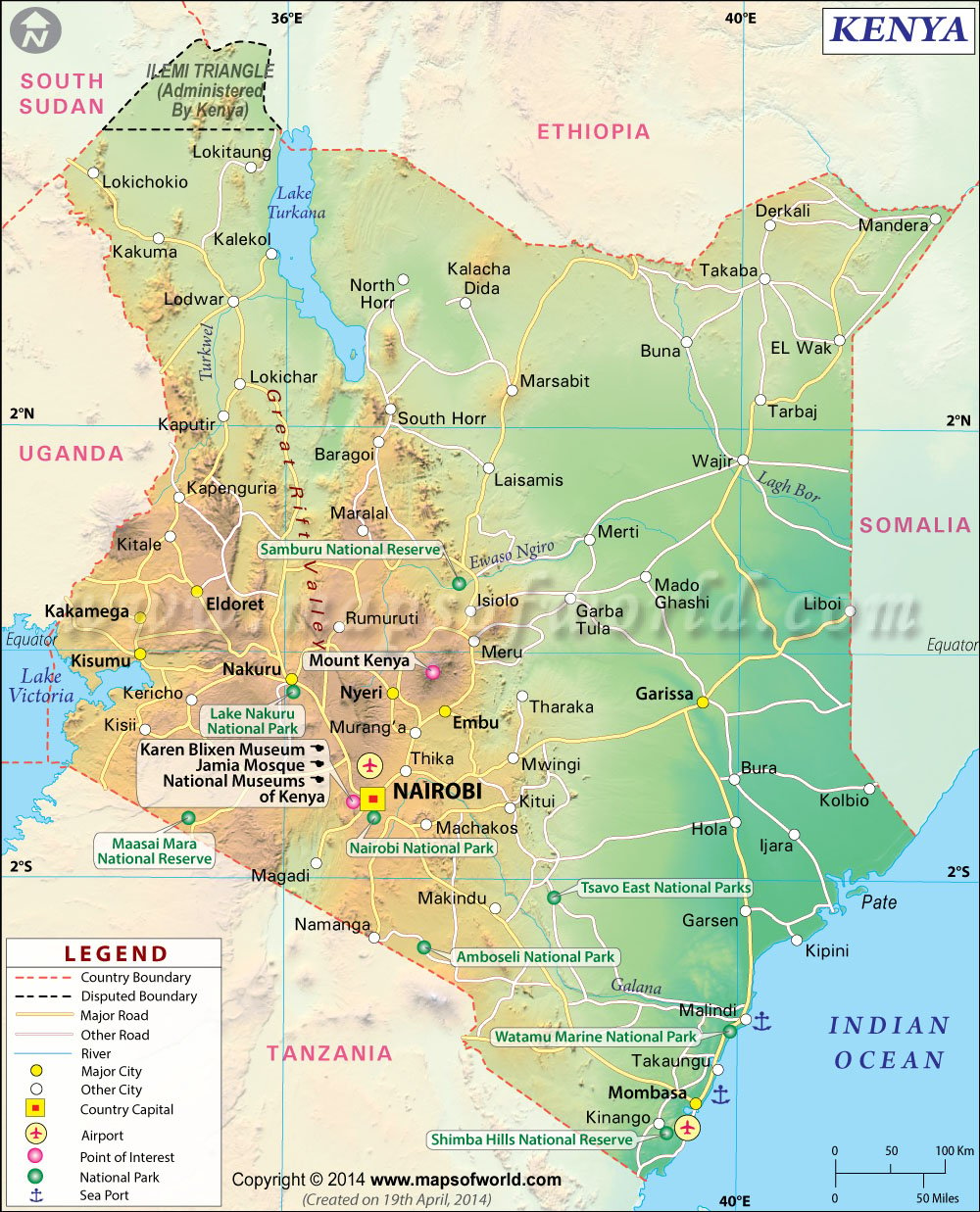 Explore this Kenya map to learn everything you want to know about this country. Learn about Kenya location on the world map, official symbol, flag, geography, climate, postal/area/zip codes, time zones, etc. Check out Kenya history, significant states, provinces/districts, & cities, most popular travel destinations and attractions, the capital city’s location, facts and trivia, and many more.

Kenya, a republic in East Africa, is a member of the Commonwealth of Nations. It gained independence in 1963.

Kenya’s history dates back to the Stone Age, making Kenya a bearer of the largest and most complete record of man’s cultural development, partly because of its rich variety of environmental factors conducive to human survival and development. Kenya is favored tourist destination especially because of its wildlife treasure.

Kenya lies across the equator on the East coast of Africa.
It borders Somalia, Ethiopia and Sudan to the North, Uganda to the West, Tanzania to the South and the Indian Ocean to the East.

The Kenyan Flag contains three equal horizontal bands of black (top), red, and green; the red band is edged in white; a large warrior’s shield covering crossed spears is superimposed at the center.

The land stretches from sea level in the east, to 5,199 meters at the peak of the snow-capped Mount Kenya.

From the coast, the altitude changes gradually through the coastal belt and plains, the dry intermediate low belt to what is known as the Kenya Highlands.

The monotony of the terrain in the low belt is broken by residual hills, masses of broken boulders and inselbergs. Settlement is confined to places where water can be found and wildlife occupies the greater part.

The Great Rift Valley bisects the Kenya Highlands into east and west. Mount Kenya is on the eastern side. The Highlands are cool and agriculturally rich. The Kano plains dominate the Lake Victoria Basin. The northern part of Kenya is plain and arid.

Even though the Equator cuts through Kenya, it enjoys a tropical climate in most parts. It is hot and humid at the coast, temperate inland and very dry in the north and northeast parts of the country. It is pleasant and favorable with plenty of sunshine all year round. Rainfall is sometimes heavy around April to May. Though it is cloudier in some areas around July/August, there is not much rain at that time.

Flora And Fauna of Kenya

Kenya contains diverse vegetation. Forests containing palm, mangrove, teak, and sandalwood trees can be found along the Indian Ocean coast. Baobab, euphorbia, and acacia trees dot the lowland plateaus, while extensive tracts of savanna (grassland), interspersed with groves of acacia and some temperate forests, characterize the terrain of the highlands up to about 3,000 m (about 9,000 ft). The higher alpine zone contains giant senecio and lobelia shrubs.

Kenya is known for its varied wildlife and is particularly famous for its big game animals in the African savanna. These include elephants, rhinoceroses, zebras, giraffes, and lions and other large cats. Most of these species are protected in national parks and game reserves. Birds, including ostriches, flamingos, and vultures abound in Kenya, as do reptiles such as pythons, mambas, and cobras.

According to the 1989 Census, there were 42 tribes living in Kenya, as well as all of the non-African people groups. Therefore there are 42 ethnic languages spoken in Kenya apart from English and Swahili. The average life expectancy at birth in Kenya is 45 years. The low life expectancy and years of high birth rates have combined to give Kenya a young population: 41 percent of the people were younger than age 15 in 2003. Some 66 percent of Kenya’s population lives in rural areas, most concentrated in the fertile southern half of the country.

Arts, Culture and Music of Kenya

Kenya, as a nation, has a unique way of life of the people in terms of social institutions values, norms, ethics, attire and the various forms of artistic and literacy expression. This way of life constitutes the culture, expressed in the nation’s unique artifacts, songs, art, dance, theatre, literature and a variety of other traditions. These cultural values represent the realization of national unit and cohesion as well as the creation of national pride and a sense of identity. Kenyans see and define culture in a dynamic context that embodies responsiveness to the changing social economic physical, political and technological environment.

Kenyan economy has been traditionally based on agriculture. Although during the past decades the growth of industry and tourism has decreased agriculture’s dominance, farming activity still accounts for the major part of the country’s economy.