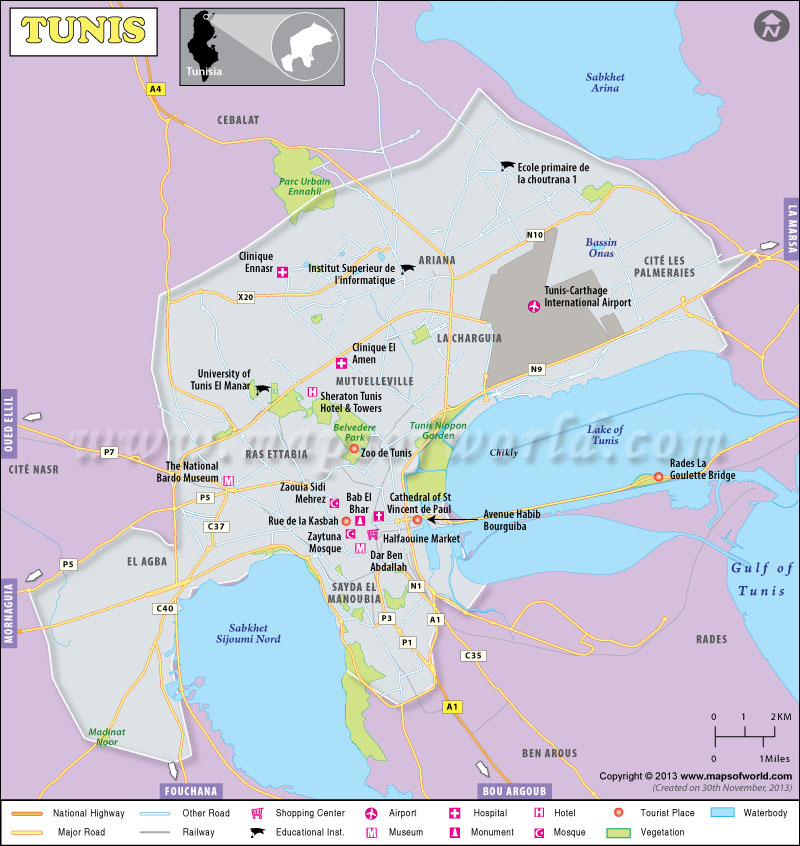 A modern city with a old word charm makesTunis travelan exciting affair. The city conjures up images of an Arab world that has a distinctly Mediterranean feel.Traveling in Tunisis therefore a memorable experience with the best of both world offered on a platter.

Located on the north eastern part of Tunisia, Tunis is the capital city and hence the hub of all major activities. From spectacular sightseeing spots to shopping and digging into authentic Tunisian food, traveling in Tunis is a bundle of multifarious activities.

With a well developed system of transportation, one can convenientlytravel in Tunis. The Tunis-Carthage Airport offers regular flights including international flights. Other facilities like money exchange are also provided. Perhaps the best way to travel in Tunis is to avail the bus service. Buses are not only cheaper but makes for a good way to get the feel of the city life. Taxis are another option to travel around Tunis, however, the fares need to be confirmed before boarding a taxi.

Another inexpensive way of traveling in Tunis is the train. The Tunis metro ride is apt for touring around the city. There are several metro stations all around the cities from where the tickets can be purchased. These are also quite cheap.

Tunis travelis fun unlimited also because of the spectacular shopping opportunity the city offers. Tiny shops adorn the narrow lanes with their bright wares. One can shop for jewelry, pottery, antiques, clothes, leather and brass articles and carpets. Restaurants abound in the city dishing out authentic Tunisian cuisines, hot and spicy to the core. Boarding is also not an issue in Tunis as there are ample hotels and other accommodations available.

Tunis travel guidesare easily available from tourist information centers and hotels that are sure to makeTunis travelabsolutely hassle free and an unforgettable experience.

ThroughTunis Tourismone can experience the ultimate pleasures of the beautiful city of Tunis. Tunis is the capital of Tunisian Republic. It is also considered as the economical, cultural, administrative and communication heart of the country. Tunis is located on a hilly region at the Mediterranean coast of the country. The beautiful location of the city and the various tourist spots located within and near the city has madeTunis Tourismvery popular.

There are some very nice and frequently visited tourist destinations scattered all over the city. Some of the most popular sights are:

“Souq” a fascinating market place located in Medina is one of the busiest locations in the city. Tourists as well as the natives gather around the overflowing shops buying all kind of cloths, jewelries, showpieces and all.

There are quite a number of big as well as roadside restaurants located all over the city offering mouthwatering foods and variety of drinks to all their guests.

Tunis weatheris an important fact that need to be considered before planning a vacation in Tunis. Located on the northern part of Tunisia, Tunis has hot summers and mild winters.

The summer season in Tunis begins in the month of May and continues till the month of September. The temperatures soar to great heights during this part of the year. July and August are probably the hottest months in Tunis with average temperature as high as 26 °C.

Although Tunis comes under the Mediterranean Climatic belt,Tunis weatheris also affected by the Saharan climatic belt in the southern part.

Tunis Nightlifeis comparatively quiet and peaceful, which is why travelers often consider Tunis to be a city without nightlife.Tunis Nightlifefeatures a lot of drinking rather than loud music and wild dancing. Thenightlife of Tunisis enjoyed mostly by men. It is structured as to serve men then women. This is the only reason why women travelers do not feel comfortable to go out during the night.

Sousseis one of the most common and busiest nightlife locations in the city. Most part of the area consists of bars where one can find strippers and hookers too. These areas are very much avoided by female travelers. In other parts of the area several nightclubs are located where live music is performed.

Most of theTunis Restaurantsoffer variety of outstanding food in a very affordable price. Food is an integral part of the Tunis culture, which is not only enjoyed by the locals but the tourists from all over the world can take pleasure in exploring the huge variety ofTunis cuisine. There are also several multi cuisinerestaurants in Tunis. Almost all these restaurants serve full three course meals along with wine and other drinks.

Some of the most popular restaurants in Tunis are :

Tunis has got a wide rang of cuisine specialties that include budget food as well as exotic dishes, which is why it is popular among both natives and tourists.