The African country Tunisia covers a total area of 163,610 square kilometers. About 17.5% of the land of the country is arable. The residents of the country are known as… 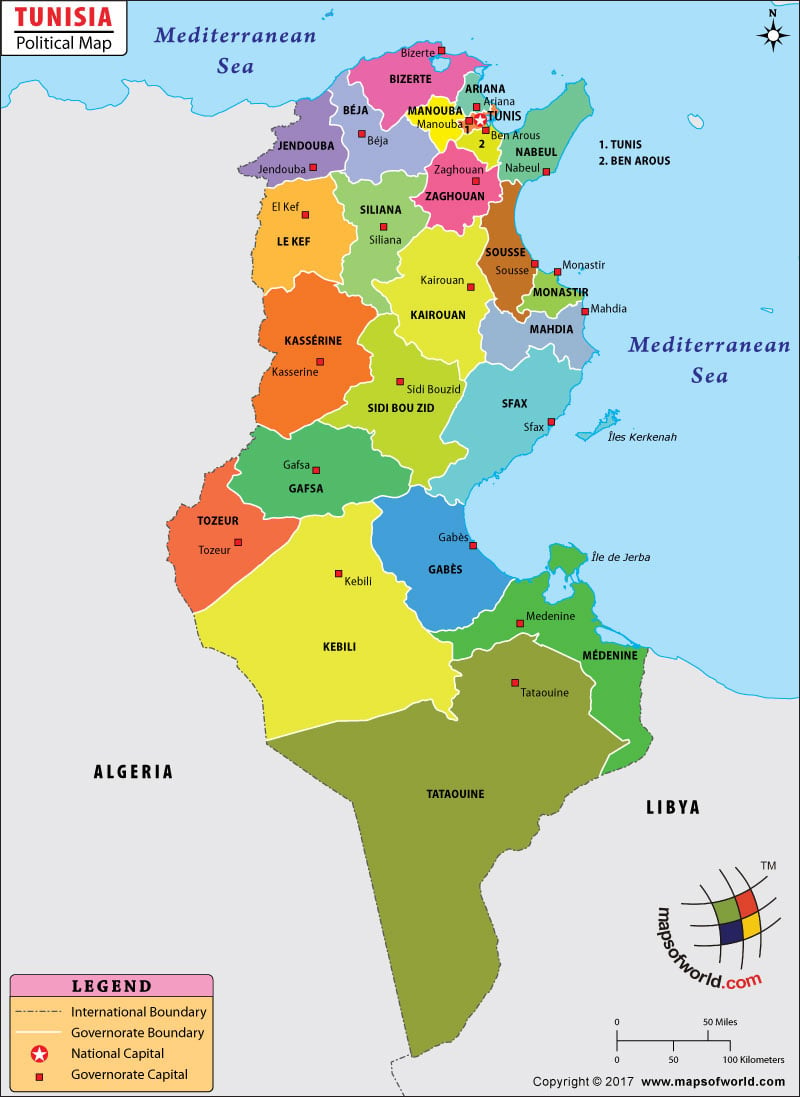 The African country Tunisia covers a total area of 163,610 square kilometers. About 17.5% of the land of the country is arable. The residents of the country are known as Tunisians. Majority of the people of Tunisia are Muslims. In the Tunisia political map, the major cities, national capital, international and internal boundaries have been marked by using specific symbols. The scale of the map has also been provided.

Tunisia is a North African country, which is located at the Mediterranean coast. The geographic coordinates of Tunisia are 34° North latitude and 9° East longitude. The country’s coastline stretches for a distance of 1148 kilometers. The country has mountains in the north, semiarid regions in the south and dry terrain in the central part. The population of the country as per the estimate of July 2007 is 10,276,158.

The bordering nations of Tunisia are:

The capitals of Tunisia governorates have been indicated in political Tunisia map by white squares. Some of the indicated governorates capitals are Medenine, Tataouline, Gabes, Kebili, Le Kef, Gafsa, Nabeul, Siliana and Jendouba.

Tunis is the capital of Tunisia. The capital city is served by Tunis/ Carthage airport. The geographic coordinates of Tunis are 36°48′ 10″ North latitude and 10° 10′ 47″ East longitude. The city is 3 feet above sea level. Some of the cities located in close proximity to Tunis are Bab Khadra, Kasbah, Al Madinah, Bab as Suwayqah, Montfleury and Bab al Jazirah.

There are many tourist attractions at Tunis. The medina of Tunis was declared as a UNESCO World Heritage Site in the year 1979. The income of the national capital is boosted by products like olive oil, carpets and textiles.