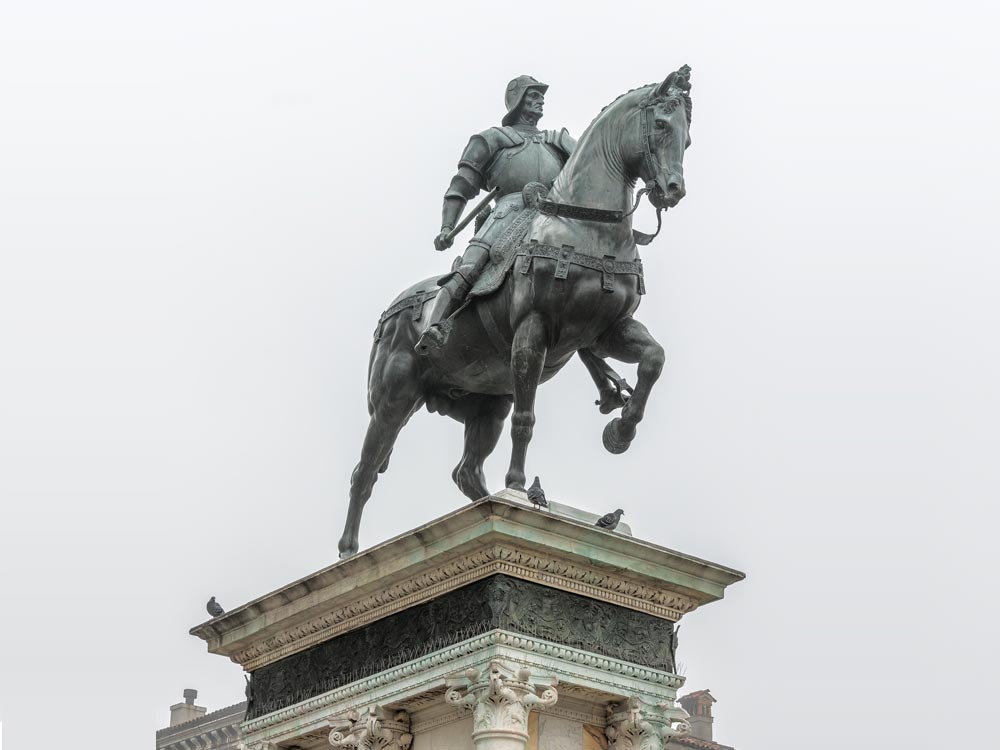 The equestrian statue of Colleoni  by Andrea del Verrocchio

Colleoni Monument is one of the most remarkable tourist attractions in Venice, Italy and this monument is one of the best places to get a glimpse of the rich past of the city. The Colleoni Monument is a magnificent piece of work which belongs to the glorious period of the Venetian Renaissance. The magnificence of the base with its marble work is capped by the vigor of the equestrian figure, and it is truly striking to notice that both the figure itself and its solid base balance each other in perfect harmony. But what baffles many visitors is that the figure itself bears no resemblance to the original Bartolomeo Colleoni (1400-75), but depicts the way a “condottiere,” proud and conscious of his power, should ideally look like.

Colleoni is a renowned figure in the history of Venice and he was the one who commanded the land forces of the Republic and eventually managed to accumulate an enormous amount of fortune. It is quite fascinating to find out the way the Colleoni Monument came into existence, and it is believed that Bartolomeo Colleoni on his deathbed donated all his wealth and possessions to the State on the condition that a grand monument should be erected in his memory “in front of the premium location of San Marco”. But the State was perplexed as till then it had never authorized a public memorial, but losing such a huge amount the money was beyond its imagination, so instructions were given instantly to begin the construction of the Colleoni Monument. The monument was erected in front of the Scuolo Grande di San Marco, the confraternity house of San Marco. It stands next to the Church of Santi Giovanni e Paolo as Bartolomeo Colleoni, on his deathbed, did not clearly specify that his monument must be in front of the “Church” of San Marco. The Colleoni Monument is definitely worth a visit while touring Venice.

The World Monument Fund (WMF) initiated the process of restoring the neglected monument of Bartolomeo Colleoni in 2003. The monument had suffered damage due to the climate, particularly due to salty air and pollution.

Where is Colleoni Monument?

The Colleoni Monument can be reached witin a 25-minute-drive from the Venice Marco Polo Airport. You can also reach the monument via ferry Ospedale.

As the monument is in the open, do not visit the monument when it is raining. The best time to visit is during the day.