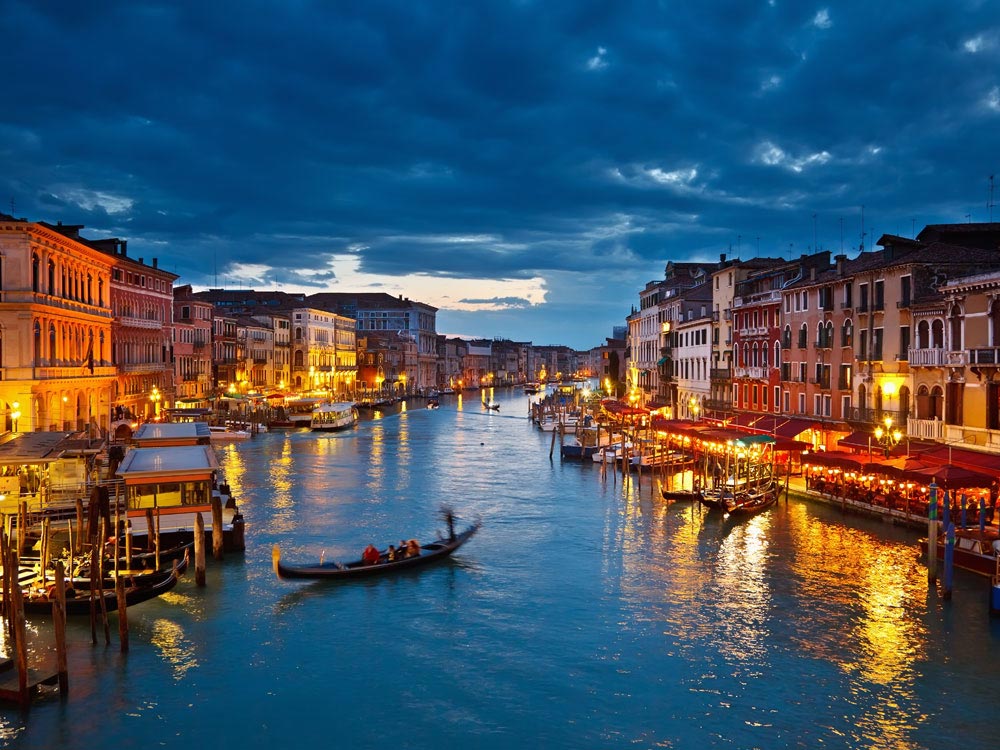 Night shot of the Canal Grande or Grand Canal of Venice, Italy

The Canal Grande and the Canale della Giudecca are the two most important waterways in Venice. They undoubtedly fall into the category of one of the premier tourist attractions in Venice. The Canal Grande separates Venice into two distinct parts, which were once popularly referred to as ‘de citra’ and ‘de ultra’ from the point of view of Saint Mark’s Basilica, and these two parts of Venice are linked by the Rialto bridge. The Rialto Bridge is the most ancient bridge in Venice.; it is completely made of stone and its construction dates back to the 16th century.

The Canal Grande or the Grand Canal forms one of the major water-traffic corridors in the beautiful city of Venice. The most popular mode of public transportation is traveling by the water bus and by private water taxis. This canal crisscrosses the entire city of Venice, and it begins its journey from the lagoon near the train station and resembles a large S-shape through the central districts of the “sestiere” in Venice, and then comes to an end at the Basilica di Santa Maria della Salute near the Piazza San Marco.

The major portion of the traffic of the city of Venice goes along the Canal Grande, and thus to avoid congestion of traffic there are already three bridges – the Ponte dei Scalzi, the Ponte dell’Accademia, and the Rialto Bridge, while another bridge is being constructed. The new bridge is designed by Santiago Calatrava, and it will link the train station to the Piazzale Roma. People also have the option of enjoying a ferry ride across the canal by simply standing-up on the deck of a simple gondola which is popularly known as traghetto in Venice.

Don’t forget to opt for a romantic gondola ride along the Grand canal, and relish the captivating beauty of Venice.

Where is Canal Grande (The Grand Canal)?

The Canal Grande is located in Venice, Italy. One of the two ends of the canal leads into the Venetian lagoon, near the Santa Lucia railway station, while the other leads into Saint Mark Basin.

The best time to visit the Canal Grande is late spring and early summer as the weather is pleasant.