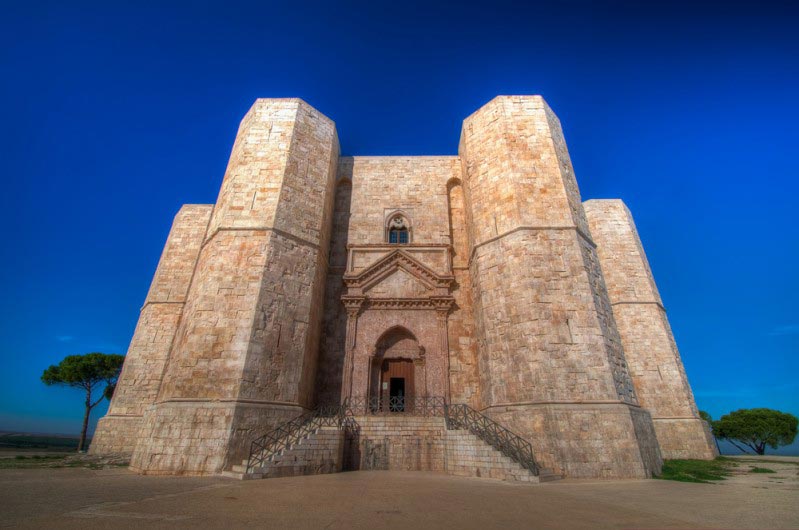 Castel del Monte, a 13th century medieval castle or citadel, features a blend of architectural styles from classical antiquity, the Muslim world, and the Gothic style from northern Europe. Located in the region of Apulia in Italy, the castle was constructed in the 1240s, and was likely founded by the Holy Roman Emperor Frederick II. The castle was built on land owned by Emperor Frederick’s mother, Constance of Sicily.

Perched atop a hill, its name meaning “Castle on the Mount,” Castel del Monte, has been steeped in mystery for many years. Its original purpose is not known for certain, though it is generally believed that it may have been constructed as a “curtain wall,” and served as a citadel. The fortress was never finished, and it has no moat or drawbridge. The architecture is noted for its unique geometric design – an octagon with octagonal towers in each of the eight corners, vaulted ceilings, and an octagonal courtyard in the center. There are two entrances to the citadel, a simple one for servants, and one ornate. The main entrance features architecture influenced by classical and Graeco-Roman styles.

Though once filled with artwork that included paintings, mosaics, and sculptures, the interior of Castel del Monte was looted in the 18th century by the House of Bourbon, who reused some pieces in their own palace. Today, the exterior architecture is the main draw to the site, but one of the few works of art remaining is a slab carving depicting a parade of knights.

Restoration began on the castle in 1928, and it became a UNESCO World Heritage Site in 1996. Castel del Monte is also featured on an Italian Euro coin.

Facts about Castel del Monte (Castle on the Mount)

Where is Castel del Monte (Castle on the Mount)?

Castel del Monte is located in the small southeastern Italian town of Andria in the region of Apulia. The castle is located near the monastery of Santa Maria del Monte. The castle is situated at a distance from major cities, though it does have a small train station that tourists can reach from Bari with limited service. A tour bus or car is the best bet to visit the castle. Visitors to the castle must park in a nearby lot and take a shuttle to the castle itself, which costs extra money.

Avoid visiting in August, when much of Italy shuts down for vacation and the temperatures are very hot. Summer months in general are hot and humid, making spring and autumn the best times to visit Castel del Monte.

Castel del Monte opens according to the following timings:

The entry ticket to the castle of mysteries costs € 5.00.

More on Castel del Monte (Castle on the Mount)