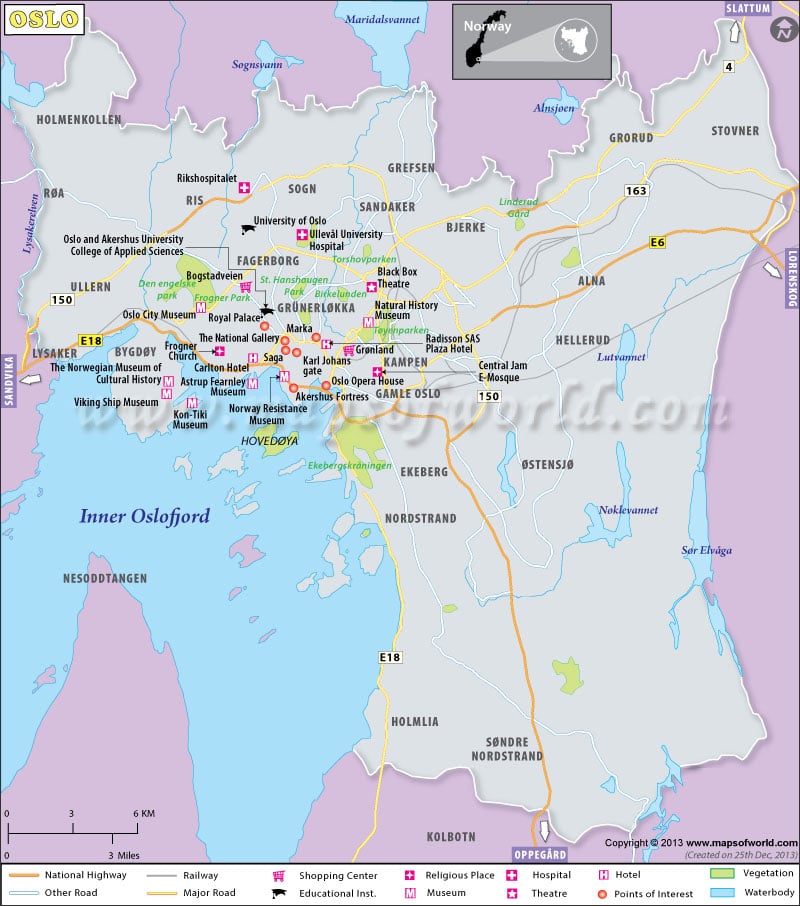 Oslo is Norway’s capital and most populous city. It has a population of over 600,000 and is the fastest-growing city in the country, being the main business, cultural, and education centers. Out of the city’s over 400 sq. km. area, half of it is covered with parks and forests, making it a green city.

Oslo is located in the northern end of the Oslofjord with 40 islands surrounding the city limits. All its other directions are covered with hills and mountains, with several lakes and rivers found throughout the city.

Airports – the main international airport that serves Oslo is Oslo Airport Gardermoen, located 45 km from the city center, with over 100 international and domestic destinations. Two secondary airports are found within the city limits, which are the Rygge Airport and Torp Airport, with the latter located 110 km away.

The best time to visit Oslo is from March to August during their spring and summer seasons. Temperatures rise during these times and accommodation are surprisingly affordable. Along with Stockholm, Oslo experiences almost 24-hour daylights in June or July – perfect for summer visits to the city’s top attractions and events. Visitors who wish to travel during September to February should expect colder temperatures, winter festivals and events, and the city’s almost 24 hours of total darkness in the winter.

Culture (fairs and festivals) and Traditions

Summer in Oslo is a great time for plenty of music festivals, feasts, and celebrations, while the winter season offers its round of winter sports events and holiday festivals. Among the most popular festivals and events in Oslo are:

There are plenty of things to do and see in Oslo – ranging from natural wonders to shopping centers, museums, and castles. Here are Oslo’s top places to visit:

There are over 50 hotels in Oslo, with one for every price category. There is a large number of luxury hotels, as well as youth and family hostels, camp sites for backpackers, guest houses for those who want a more intimate accommodation, as well as private houses for rent.