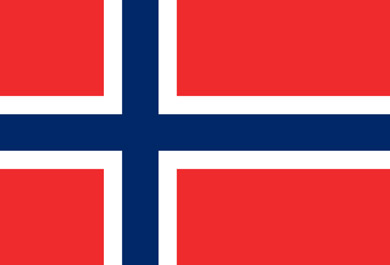 Svalbard and Jan Mayen are two dependencies of Norway in the Arctic Ocean. The capital/administrative hub of the islands is Longyearbyen. Since they are the collectivities of Norway, they use the official flag of Norway.

The ensign of Norway has a red background with an azure blue Scandinavian cross fimbriated in white, which stretches to the rims of the ensign. The perpendicular portion of the cross is placed towards the flagpole in the pattern of the ensign of Denmark, known as Dannebrog.

Neither Jan Mayen nor Svalbard has their official ensign or emblem, and the Norwegian ensign is flown by both of them, both singularly and as a federation. The Scandinavian cross is the symbol of the Christian religion. The red and blue shades symbolize Denmark and Sweden, who are past and contemporary union collaborators.