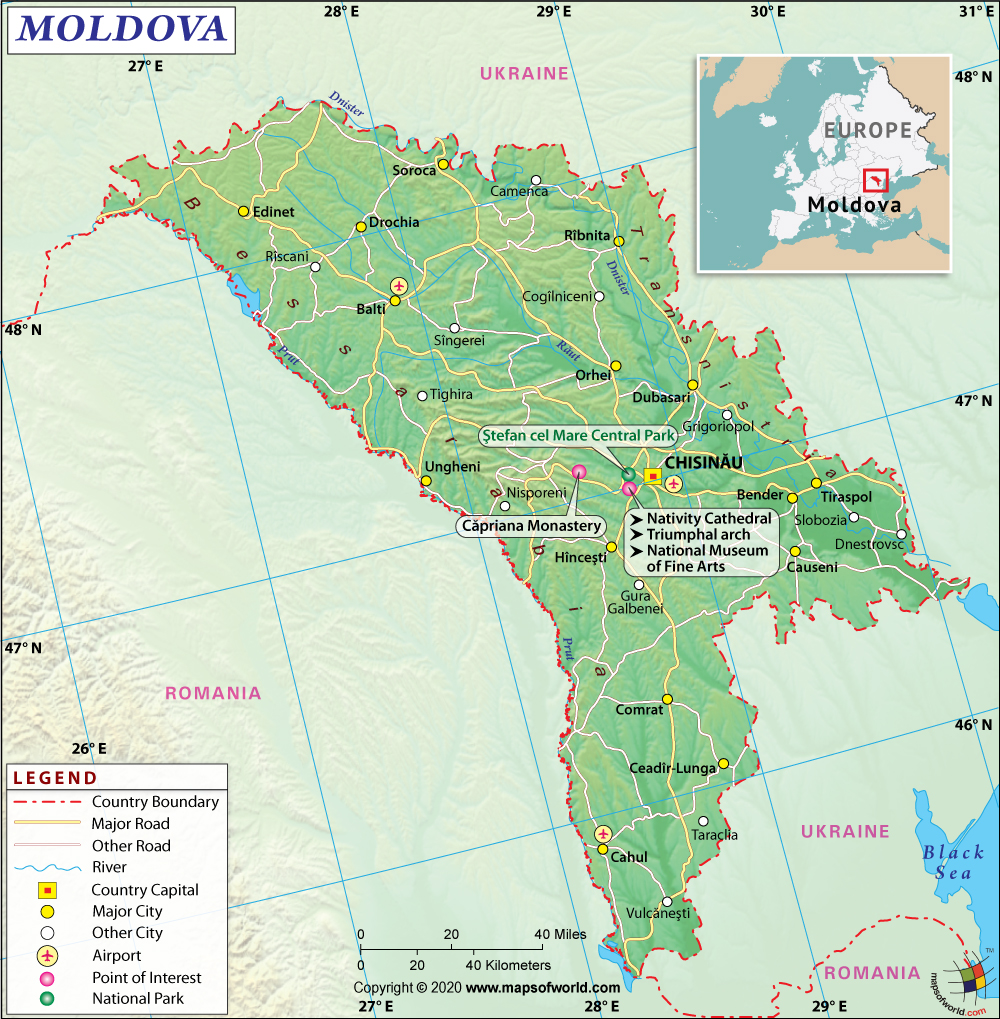 Explore this Moldova map to learn everything you want to know about this country. Learn about Moldova location on the world map, official symbol, flag, geography, climate, postal/area/zip codes, time zones, etc. Check out Moldova history, significant states, provinces/districts, & cities, most popular travel destinations and attractions, the capital city’s location, facts and trivia, and many more.

In the ancient era, the country Moldova was a part of the Principality of Moldavia. In the year 1812, the Russian Empire captured the territory of Moldova. However it took more than a century to regain the their independence and then Moldova united with the Lands of Romania in the year 1918.

The climate of Moldova can be termed as continental. Especially the central region of the country is known for its moderate climate. The summer months are warm and pleasant. This season lingers a long time in the country. Then again the winter months are comparatively cooler. Winter months also suffers from rainfalls. However summer days are much more affected by heavy rainfalls.

The Moldova flag consists of three vertical blocks. These are of same size. The hoist side band is colored in blue. The fly side is red and the middle of the flag is yellow. This color combination is similar to that of the flag of Romania. The Coat of Arms is featured in the center of the flag in the yellow band. The Coat of Arms features the Romania Eagle. It is golden in color and bordered by black. The eagle carries a yellow colored cross in its red beak. On the other hand the right talons carry an olive branch that is green in color. The left talons also carry a scepter that is colored in yellow. The middle section of the emblem has an ox head that featured on a red and blue background. The upper portion is red and the lower portion is colored in blue. Except the ox head, a star, rose, and crescent also lie there. All these are colored in yellow and they are bordered by black.

Flora And Fauna Of Moldova

•  Fauna : The animal world of the country Moldova is rich with various categories and species. Wild pigs, wild bison, deer, squirrel, horse etc can be found in the forests of Moldova. Varieties of poisonous snakes and crocodiles are also found. Among the bird there are doves, pigeons, different species of cranes etc are there in Moldova.

The total population of the country Moldova is about 4,440,000. Moldovan or Romanian covers the majority of this population. The other minorities are Ukrainian, Russian, Bulgarian, Gagauz etc. people of different religion also exist in this country. These are Eastern Orthodox, Jewish and Baptist. People of Moldova usually speak in Moldavian. However Russian and Gagauzi are also spoken widely in this country.

Art, Culture And Music Of Moldova :

•  Art : Graphic arts and performing arts are very popular in Moldova. Bessarabian arts of the nineteenth century are very famous. These paintings are basically on landscapes and the subject matter is rural. Besides that local handicrafts are also there in the various regions of the country.

•  Culture : Moldova has developed a very rich and diverse culture in the presence of the various castes, tribes and ethnic groups. Religious varieties also exist in this country. Moldova has also taken some aspects of its tradition from the neighboring countries. “Descriptio Moldaviae” is a very important cultural heritage of the country. The Prince Dimitrie Cantemir wrote this book. It contains some essential geographical, ethnographic and economic aspects of the Republic of Moldova.

To talk about the economical status of the Republic of Moldova, it is a very poor country in the European continent. The economy of the country basically agriculture based. The primary agricultural products of the country are fruits, wine, vegetables, grain, sunflower seed, sugar beets, tobacco and so on. The country has a few natural resources such as phosphorites, gypsum, lignite and limestone etc. The growing industries of the country are vegetable oil industry, sugar industry, food processing industry, foundry equipment industry, hosiery, refrigerators and freezers, agricultural machinery, washing machines; shoes, textiles etc. The primary commodities that are exported from Moldova to other foreign states are textiles, foodstuffs and some machinery. The nations that are export partners of this country are mainly Russia, Italy, Romania, Ukraine, Germany and Belarus.