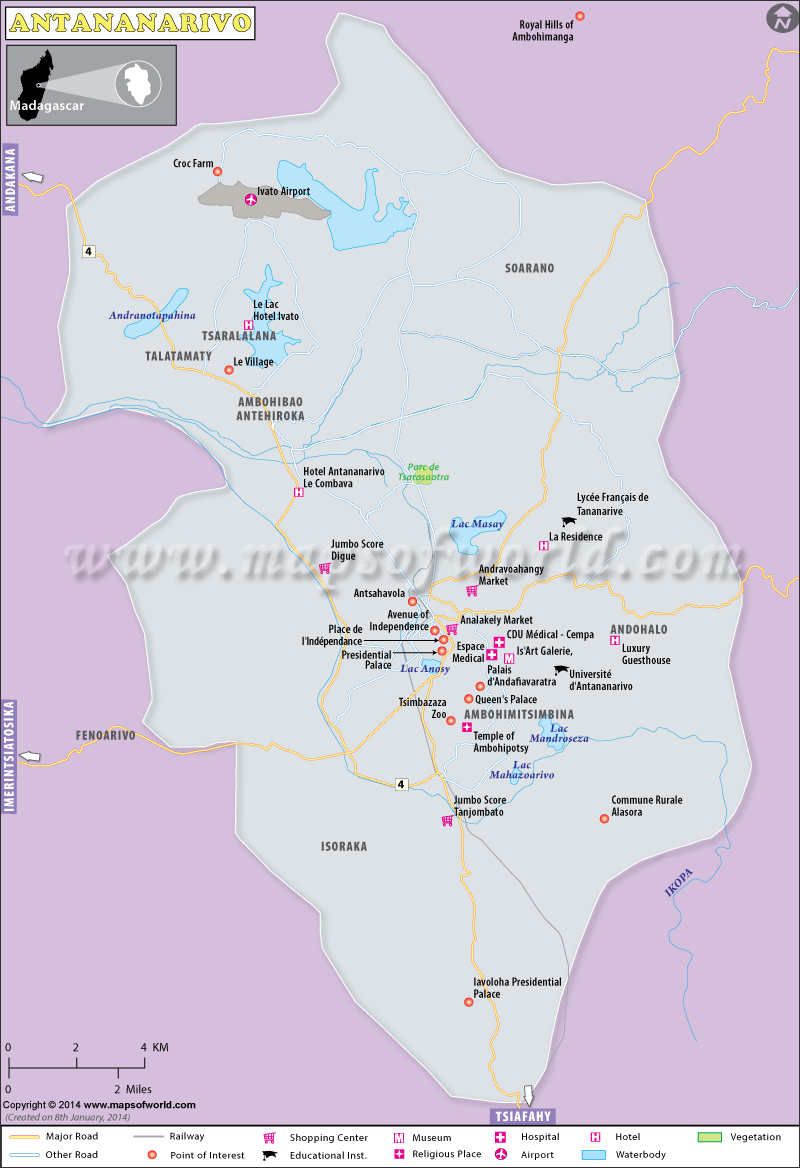 The island of Madagascar lies to the east of Africa. Antananarivo is the

and also its largest city. The city is also known as Tananarive or Tana. The city is located 145 kms away from the eastern coast of the island.

city of a thousand

“. In 1793, the Merina kings made the city their capital. King Radama I undertook a campaign of conquest and the city became the capital of entire Madagascar. It was only in 1869 that stones and mortars were introduced in the city by the missionaries. Since then the entire city has gradually been rebuilt but with very little urban planning. In 1895, Antananarivo was captured by the French and became a colony. It remained under the French control till 1960 when Madagascar won its independence and the city became its capital.

The city covers an area of 88 sq km and has a population of about 2 million.

It is built on a rocky ridge with an altitude of about 200 km and which is 4 kms in length. It is located at an altitude of 1.275m and is one of the highest cities in the island. Madagascar has several plateaus and ridges surrounded by a narrow strip of coastal plain. Amtananarivo is located on the top of one such ridge. It is about 200 kms away from the nearest sea port located at Toamasina. River Ikopa flows to the south and west of the city and is the principle source of water in addition to the mountain springs.

Antananarivo has a tropical type of climate, but because of its altitude, the climate is rather mild. It is influenced by the trade winds originating in the Indian ocean. Most of the rainfall is concentrated in the months of November to April. January is the warmest month with an average temperature of 27 degree centigrade. Apart from this, the climate throughout the year remains mild.

Antananarivo is connected to several cities of the world by air. The city is serviced by its airport called the Ivato Airport (TNR). It is located 17 kms away from the city and is connected to it by bus and taxi. In addition to international destinations, the city is connected to 51 towns in Madagascar through air routes.

You can also reach the city by ship, but you will require considerable degree of spirit of adventure and courage to undertake the journey. Some cruise ships however dock at Toamasina.

Train lines connect Antananarivo with Toamasina and Antsirabe. The train journey is very scenic and can be a great way to move around the island. If you go in a group of 17 or more, you can hire tram like vehicles called Michelin which run on the rail tracks to travel the scenic routes from the capital to other major cities of the country.

Buses and taxis also connect the various parts of the city and with other cities of Madagascar. However, taxis require lot of bargaining. If you have international driving license and are willing to risk somewhat uncertain road conditions, you can also hire a car to travel to Antananarivo and its surrounding areas.

The mild climate makes it possible to visit the city any time of the year. However, the best season is between November to January when it is warm.

Cultures (fairs and festivals) and traditions :

The culture of Antananarivo is a mixture of the traditions of Madagascar as well as the ideas brought by the European colonists. While 40% of the population is Christian, the rest maintain their traditional belief system. Most people living in the city have their roots in the rural countryside.

The festivals of Antananarivo are a reflection of this mixed culture. Here are some of the major festivals celebrated in the city.

Points of interest (places to see) :

Tourist infrastructure is poorly developed in the city. The major points of interest are as follows:

An ideal holiday calls for an ideal stay. The hospitality industry of Antananarivo is well aware of this and ensures to help you with the best accommodation options. Hotels for every budget are available in Antananarivo. They are as follows:

Apart from this, there are mid level hotels near the airport as well as resorts in the countryside.