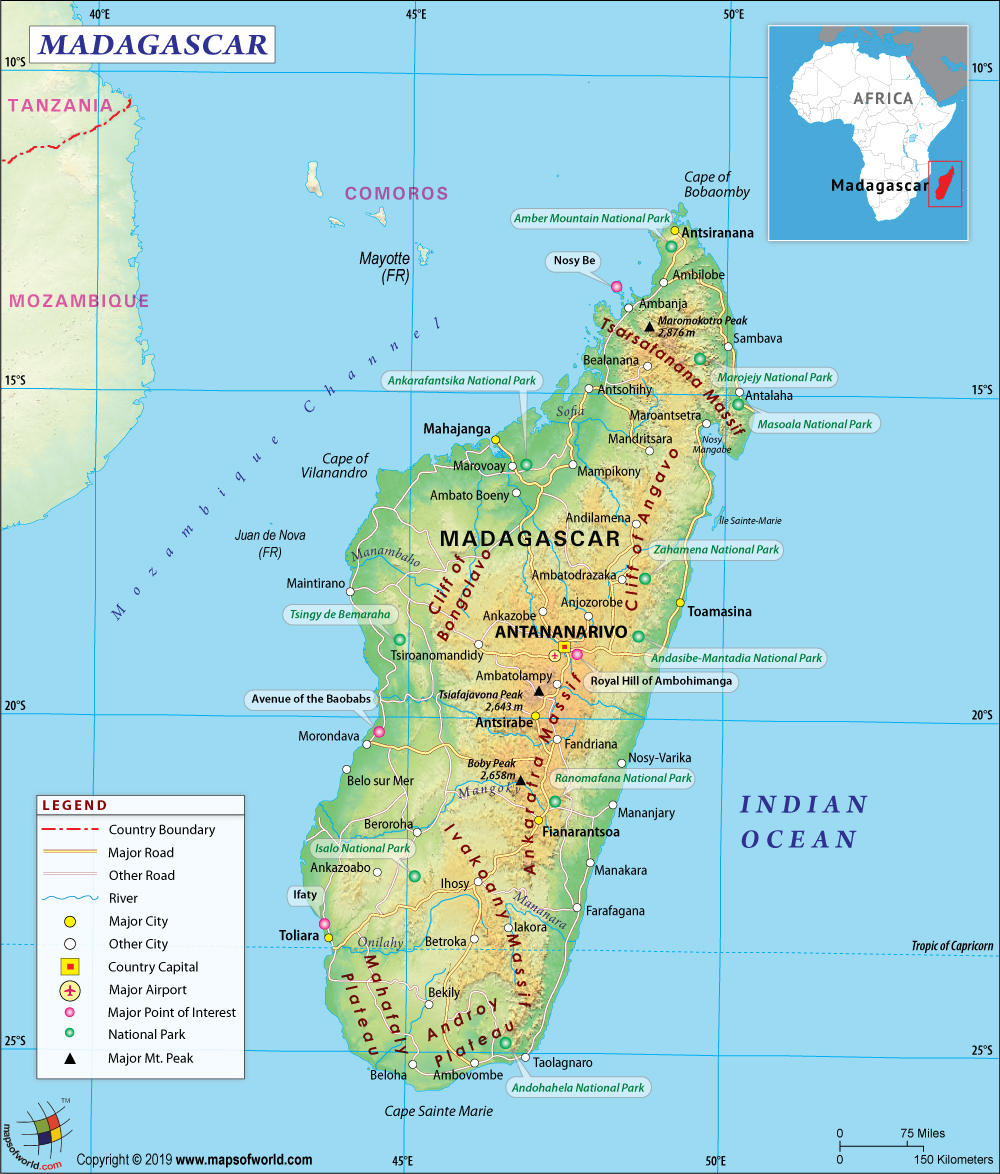 An island country in the Indian Ocean, Madagascar is located off the southeastern coast of Africa. The nation comprises the island of Madagascar (the 4th largest island of the world), as well as numerous smaller peripheral islands.

The earliest people on

arrived from Borneo via canoe, potentially as far back as 350 BCE. These people formed the Malagasy people of Madagascar, divided into highlander (Vazimba) and coastal (Vezo) groups. The island became a trade post for Omani Arab and Shirazi Persian traders in the 7th century, and cultural exchanges shaped the progress of Madagascar with the introduction of Islam and the Arabic script. The following century brought new waves of Austronesian settlers, like the Malays and Javanese, and the Bantu people of mainland Africa arrived on the island later.

Europeans arrived on Madagascar in the 15th century, beginning with the Portuguese expedition of Diego Dias around the Cape of Good Hope. Explorers from England and France followed, attempting settlements over the next two centuries. The island was riddled with pirates at the end of the 17th century and beginning of the 18th century. Many small kingdoms were formed on Madagascar beginning in the 1500s, made up of the various tribes and communities across geographies. Major kingdoms included the Merina and Betsileo kingdoms. Some of these kingdoms formed a union in the 19th century, and with the increase in power, by 1817, the island became the Kingdom of Madagascar.

France waged war with Madagascar in the Franco-Hova War in 1883, resulting in the cession of northern territory to France, followed by the annexation of the entire island by the French in 1896. Madagascar was a French colony until it proclaimed itself the autonomous Malagasy Republic in 1958, and became independent in 1960.

Madagascar is an island off the coast of Southeastern Africa, in the Indian Ocean, near the islands of Reunion, Mauritius, Comoros, and Mayotte. The nearest countries on mainland Africa are Mozambique, Tanzania, eSwatini (Swaziland), and South Africa.

Madagascar is an island in the Indian Ocean, off the southeastern coast of Africa. Between Madagascar and mainland Africa is the Mozambique Channel. Geographic features of Madagascar include the plateau of the central highlands, eastern escarpment, tropical forests and coastal mangroves. The highlands include three main massifs, the highest of which is Maromokotro of the Tsaratanana Massif. This peak, located in the north, stands 2,876 meters (9,346 feet) above sea level, making it the country’s highest point. On the east coast, the Canal des Pangalanes is a series of lagoons and lakes connected by a canal. The island’s largest lake is Lac Alaotra in the central rift valley. Rivers in Madagascar include the Mananara, Mangoro, Bemarivo, and Mananjary Rivers, as well as the Betsiboka, Mania, and the Onilahy. Madagascar is also home to many waterfalls. Here is Madagascar Physical Map showing all physical feature of the country.

Points of Interest in Madagascar

Madagascar is well known for its natural attractions, including national parks and wildlife. One of Madagascar’s best attractions is the Tsingy de Bamaraha, a nature reserve and UNESCO World Heritage site. This site is home to the Labyrinth of Stone, as well as a variety of native wildlife. A similar site is the Tsingy de Ankarana, which is in the north and a good site to check out lemurs. Other national parks include Isalo National Park, Andringitra National Park, and Masaola National Park. Nosy Be, an island off the coast of Madagascar, is also the most popular resort destination in Madagascar, with beaches and coral reefs, lemurs, and fishing opportunities.

The capital, Antananarivo, or Tana for short, is home to government buildings including the Queen’s Palace, Rova, and the Prime Minister Rainilaiarivony’s Palace. The city also offers open-air markets. More Travel Information…

The main airport in Madagascar is Ivato Airport, in the capital. Flights are available from Europe and Africa. Flights are also available between cities on the island, as well as to the island of Nosy Be. Another option is to enter the country via boat from Mauritius or Reunion into the city of Toamasina. The railroad system in Madagascar includes lines between the capital and several other cities, including Toamasina and Antsirabe. Trains are inexpensive, but not always reliable or fast.

In the cities, visitors can get around via taxi or bus, and many parts are walkable. Bikes are another good way to get around. Roads in Madagascar are not well maintained, though there are about 3 decent long-distance roads between major destinations. Though travel by car can be cheap, travel times will be considerably longer than expected. Taxi-brousse, or taxi-buses, can be an interesting option, often taking multiple days and transporting up to 15 people.